LYON, France – More than 360 tonnes of chemicals, 200 kilos of methamphetamine, cocaine and LSD, and USD 2 million in cash have been seized and four illicit laboratories dismantled in an INTERPOL-led operation combating methamphetamine production and smuggling across the Americas. 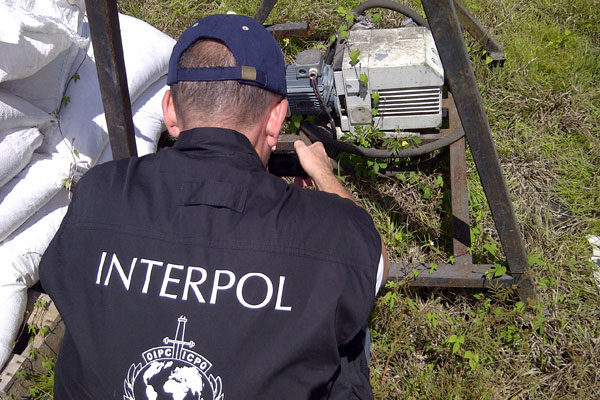 An officer inspects an engine used to power equipment to mix precursor chemicals.

Some 25 suspects were arrested across the participating and 35 investigations initiated. 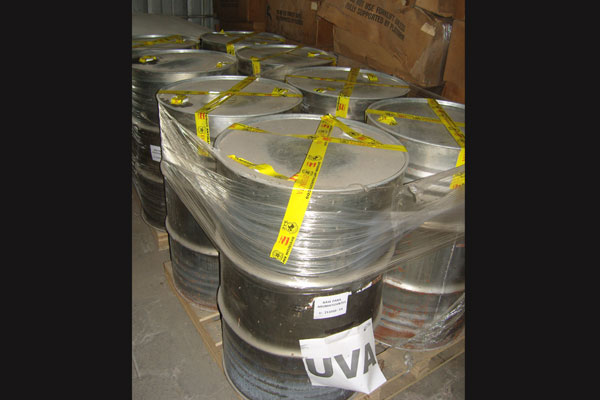 The training ensured the widest level of information-sharing and established strong communication networks for the operation, which ran from September to December 2012. 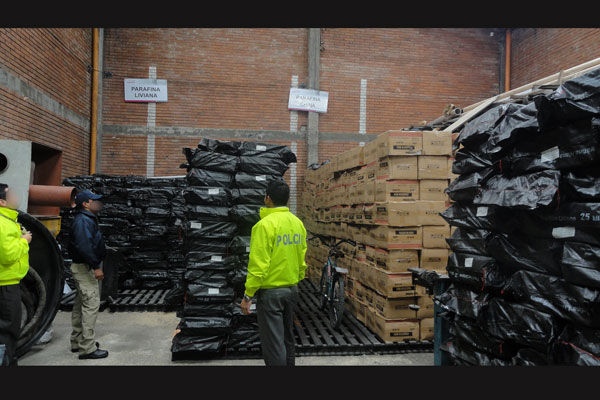 An important aspect of Icebreaker was to develop inter-agency cooperation at the national and regional levels. 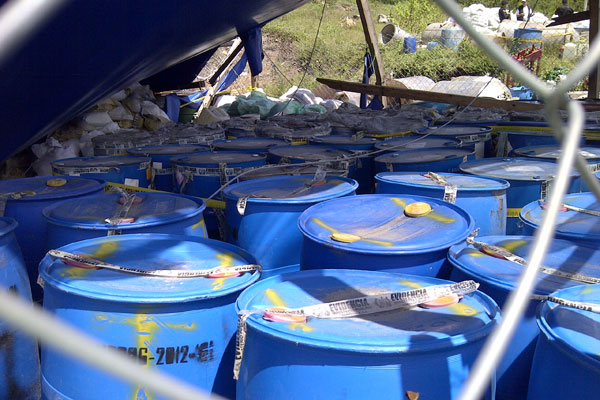 A series of training sessions where held in Panama, Jamaica and Mexico in advance of the operation.

Some 200 kilos of methamphetamine, cocaine and LSD were also seized, along with USD 2 million in cash. 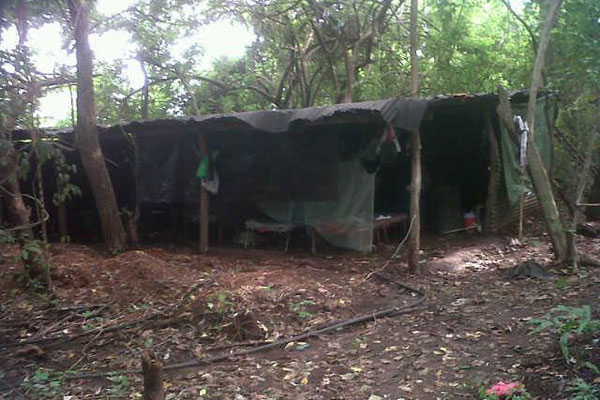 One aim of the operation was to locate and destroy clandestine laboratories, such as this one in the jungle of Guatemala. 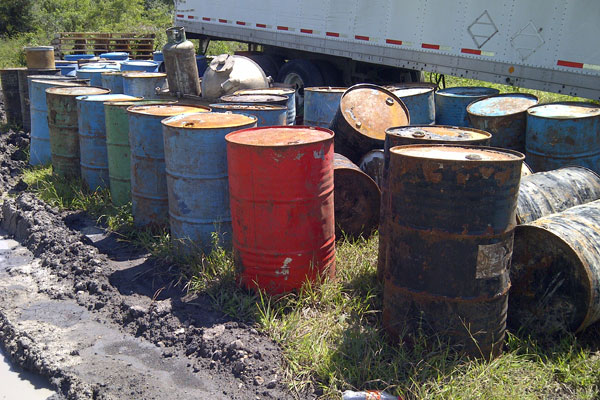 Icebreaker was run in partnership with the World Customs Organization and the International Narcotics Control Board, supported by the Canadian Department of Foreign Affairs and International Trade. 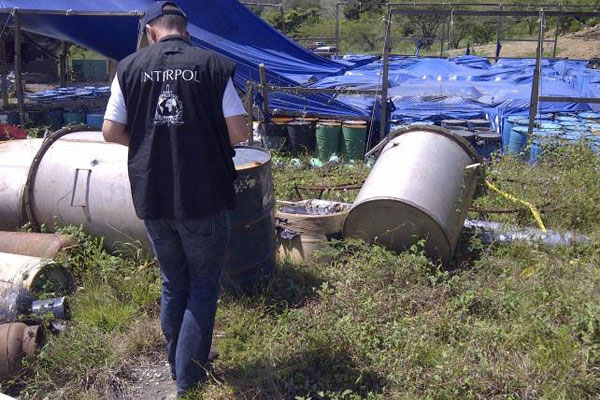 Operation Icebreaker saw the seizure of more than 360 tonnes of precursor chemicals used for the illicit manufacture of methamphetamine. 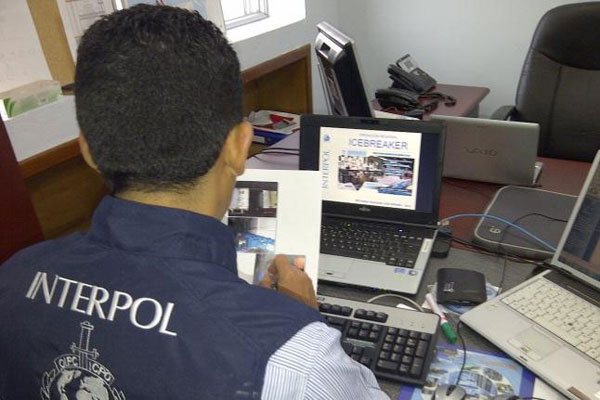 The operation was coordinated from INTERPOL’s Regional Bureau in San Salvador.

An illegal laboratory in Mexico.
/

Codenamed Icebreaker, and involving 11 countries across the region, the Operation – which was run in partnership with the World Customs Organization (WCO) and the International Narcotics Control Board (INCB) – also focused on developing inter-agency cooperation at the national and regional levels.

Coordinated from INTERPOL’s Regional Bureau in San Salvador, key objectives of the operation were to identify and seize shipments of precursor chemicals used for the illicit manufacture of methamphetamine, to dismantle the organized crime groups behind the trafficking and to locate and destroy clandestine laboratories.

“While the results from Icebreaker are significant, what is equally if not more important is the level of cooperation we have seen amongst the different agencies involved which provides a strong base for future operations,” said Bernd Rossbach, Director of INTERPOL’s Specialist Crimes unit.

“This also sends out a strong message to the criminal networks behind this illicit trade that our continuing efforts with the World Customs Organization, the International Narcotics Control Board and all involved agencies will continue in order to identify and bring them to justice,” added Mr Rossbach.

“Well coordinated and focused enforcement operations with our partners, such as INTERPOL and the INCB, can deliver the kind of results that governments and the public expect as part of our mandate to protect the health and safety of people around the world,” said WCO Director of Compliance and Facilitation, Gaozhang Zhu, stressing that Operation Icebreaker was just another good example of how outcomes can be maximized through cooperation.

Rossen Popov, Chief of the INCB Precursors Control Section, also pointed to cooperation as a key factor in the success of Operation Icebreaker. “INTERPOL is one of our most  our important partners particularly in intelligence-sharing and other operational activities related to identifying new trends and methods of precursors trafficking and illicit drug manufacture and in investigating those responsible,” said Mr Popov.

Supported by the Canadian Department of Foreign Affairs and International Trade (DFAIT), Icebreaker was the first of a series of operations in the Americas aimed at enhancing regional capacity to more effectively target and dismantle the organized crime networks involved in trafficking.

"This operation clearly demonstrates the success that can be achieved through partnership and cooperation across jurisdictions and borders in tackling transnational organized crime," said Commissioner of the Royal Canadian Mounted Police and INTERPOL Executive Committee Delegate for the Americas Bob Paulson. "The relationships amongst INTERPOL member countries are only getting stronger as we move forward in pursuing more intelligence-led operations such as Icebreaker."

A series of training sessions was held in Panama, Jamaica and Mexico to bring together officials from the different involved organizations to ensure the widest level of information-sharing and to establish strong communication networks before the launch of the operation, which ran from September to December 2012.

An essential component of the training is to educate participants on INTERPOL’s tools and services, including its secure global police communications system which can provide real-time access to the Organizations databases including those for internationally wanted fugitives, stolen and lost travel documents and stolen motor vehicles.