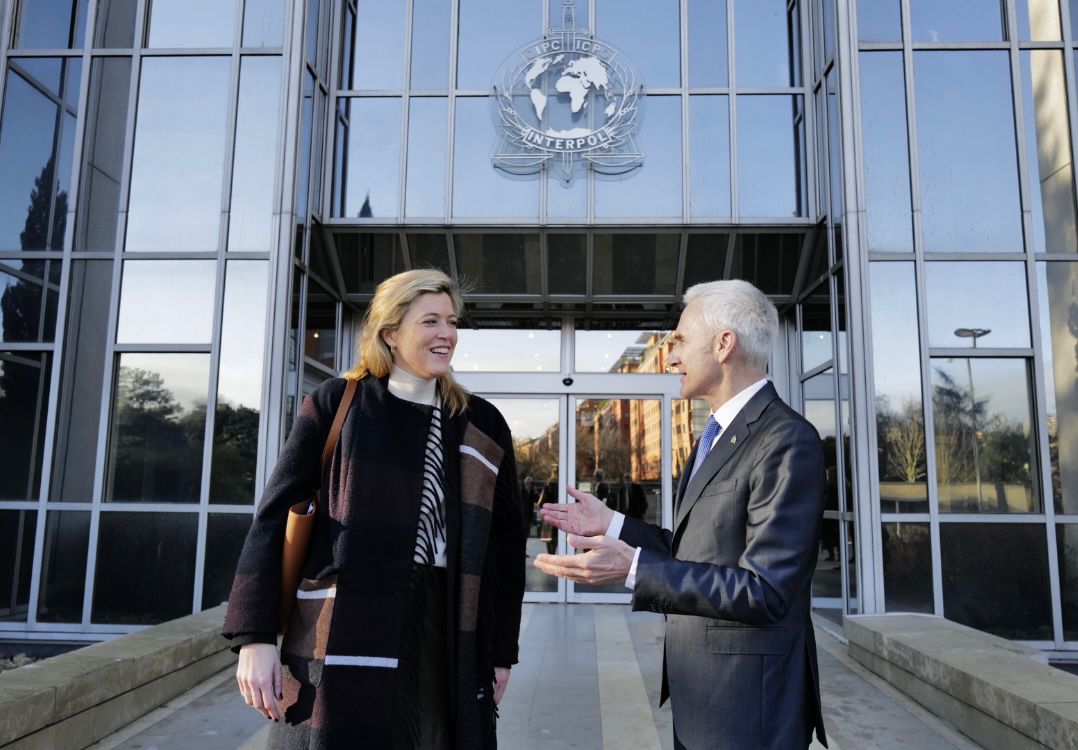 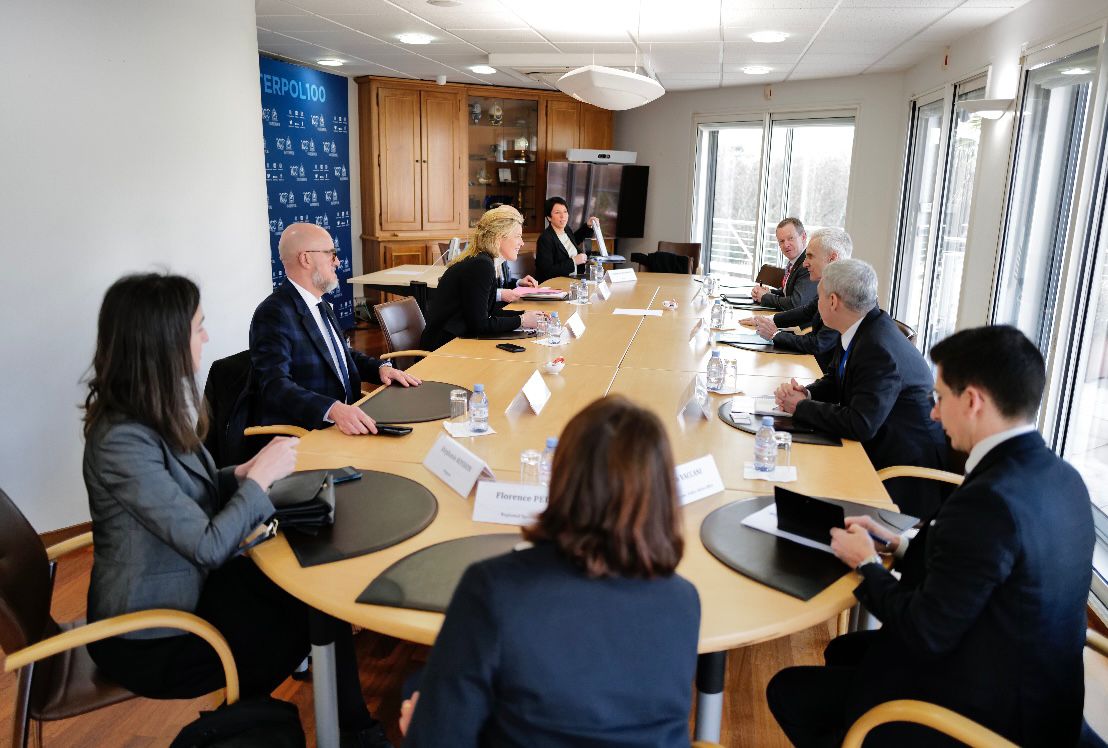 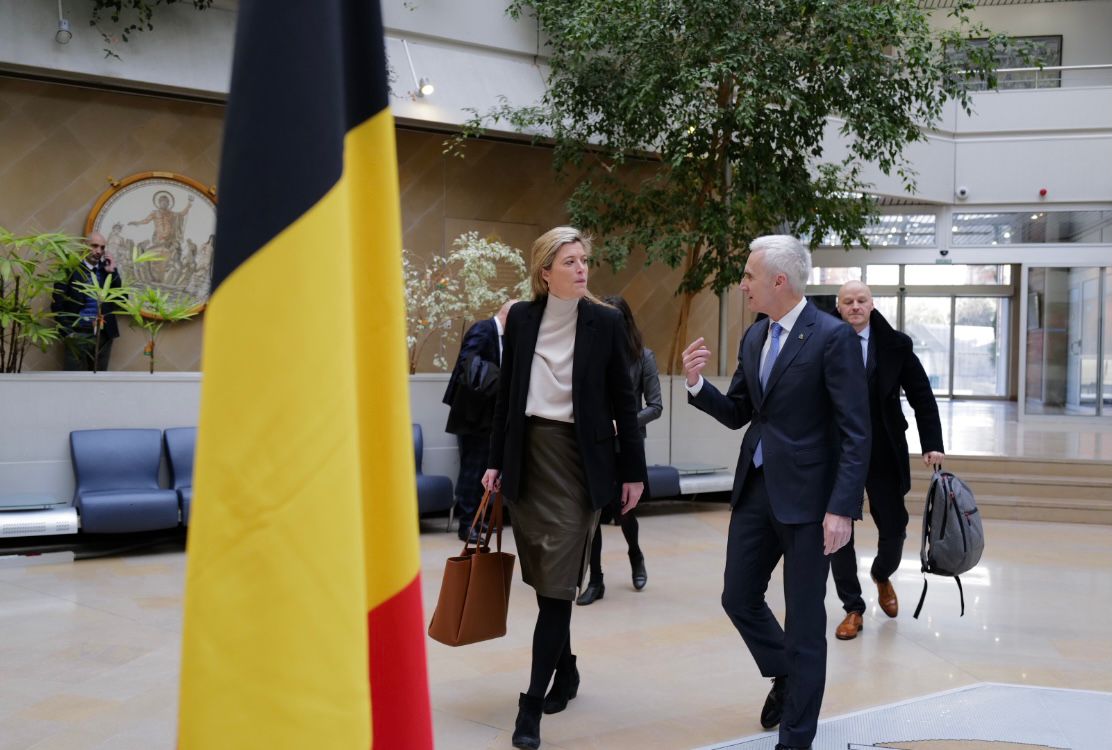 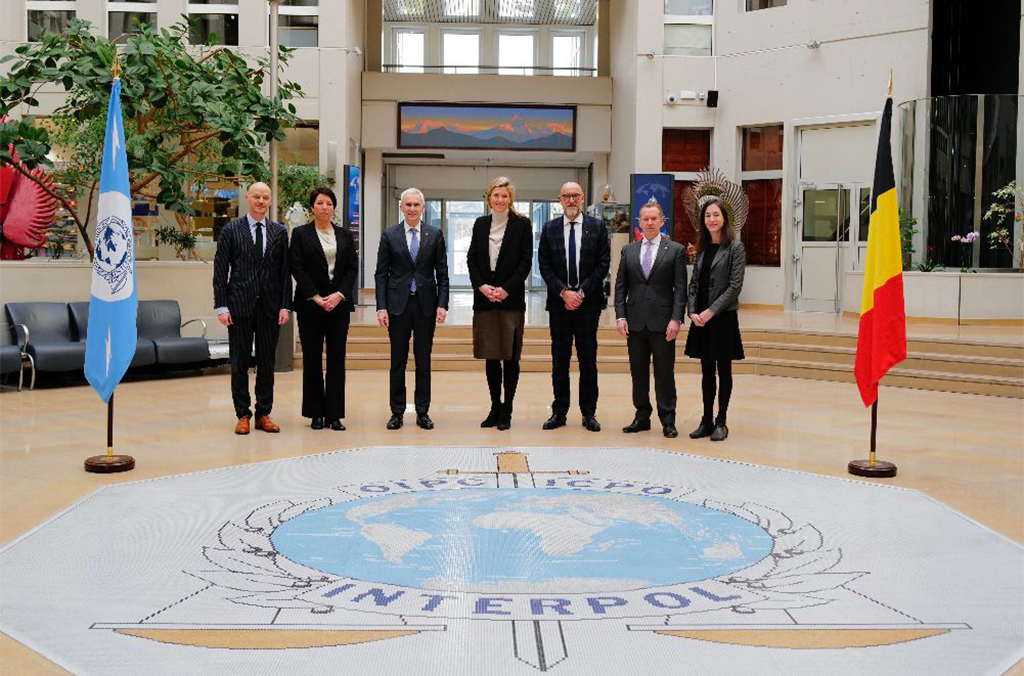 Belgium is a key partner and contributor to INTERPOL. Discussions between Minister Verlinden and Secretary General Stock focused on Belgium’s top security priorities, notably concerning organized crime and narcotics. The two leaders considered how to strengthen collaboration between Belgium and INTERPOL in order to achieve common goals.

As a participating country in INTERPOL’s Project Sharaka, aimed at enhancing border security to address terrorism threats in the Middle East and North Africa, Algeria has expanded access to INTERPOL’s I-24/7 network to frontline officers at key points across the country. 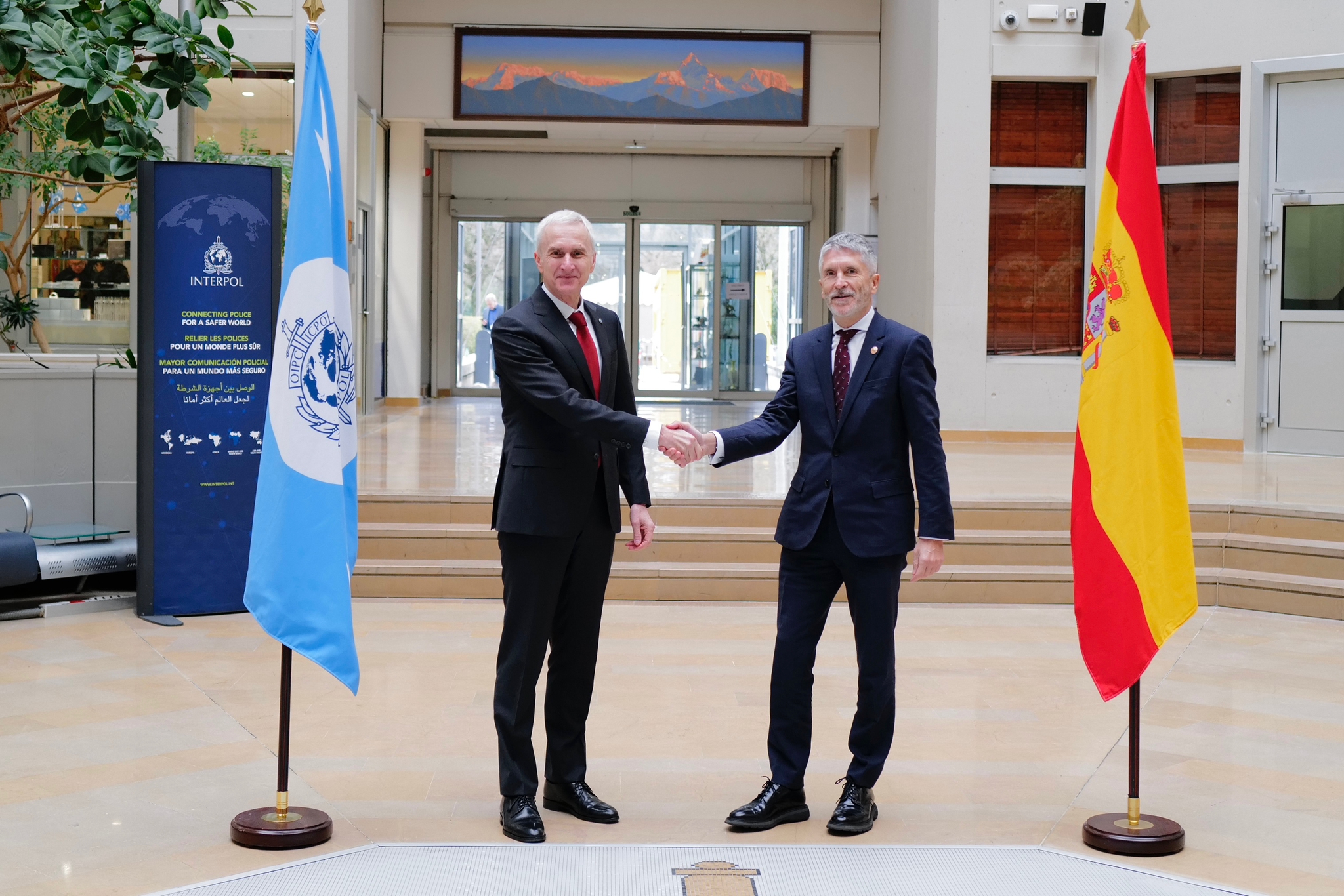 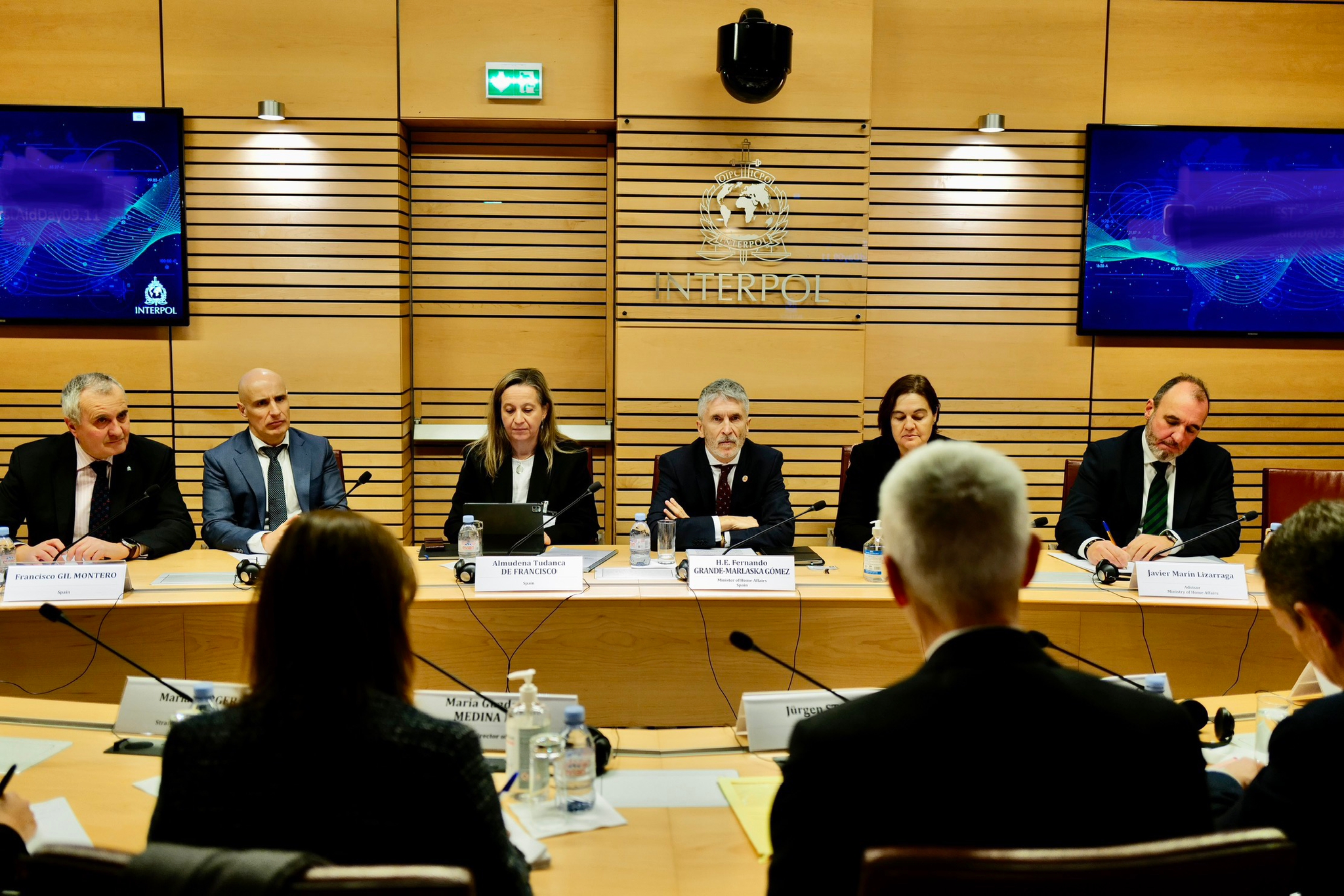 Spain is a top user of INTERPOL’s policing capabilities, with its activity already surpassing pre-pandemic levels of 2019. Spanish law enforcement has played key roles in recent operational successes, placing the country at the forefront of international police cooperation.

During the visit, Minister Grande-Marlaska reaffirmed his country’s support for INTERPOL and discussed a range of operational and strategic matters with the Secretary General, including issues relating to the fight against terrorism and efforts to counter human trafficking.

12 December 2022 - Reece Kershaw, Commissioner of the Australian Federal Police was welcomed to INTERPOL headquarters in Lyon, France for a morning meeting with Secretary General Jürgen Stock.

The two leaders discussed how to enhance cooperation between Australia and INTERPOL, particularly in the area of combating cybercrime.

Australia is a key participant in many INTERPOL projects and operations, including the INTERPOL Cooperation Against ‘Ndrangheta project, which seeks to disrupt one of the world’s most powerful mafia groups. 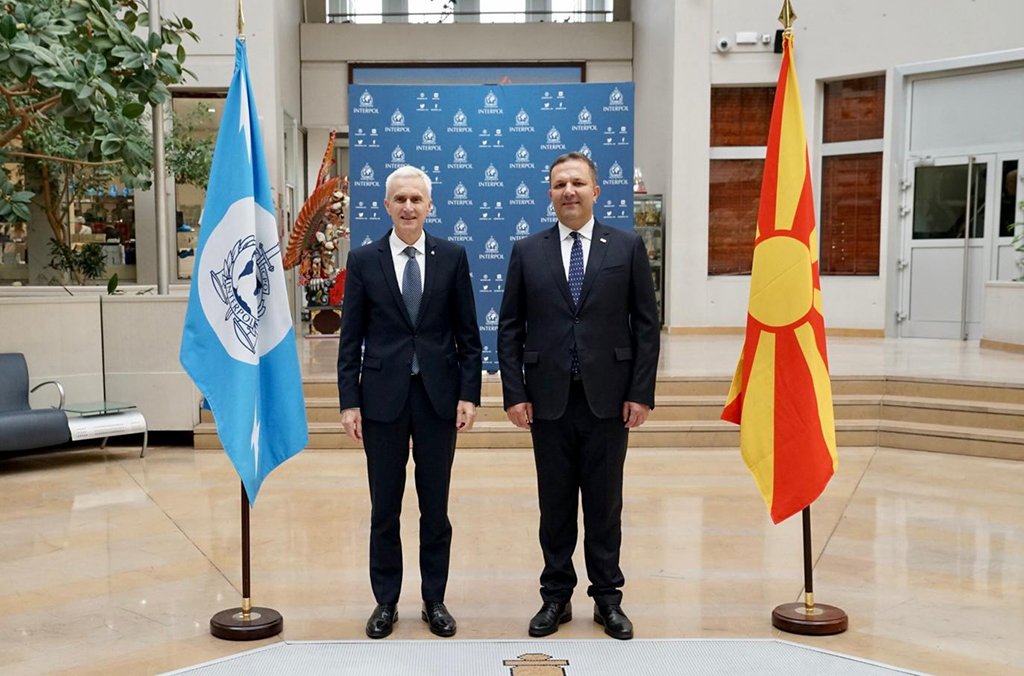 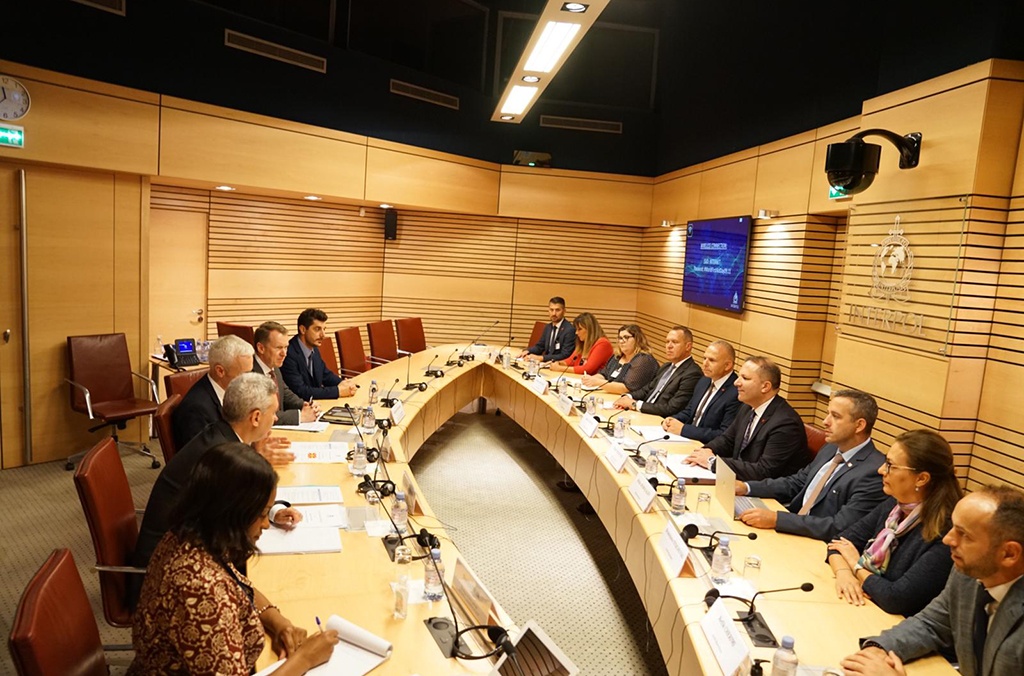 16 September 2022 - Oliver Spasovski, Minister of Interior of North Macedonia met with Secretary General Jürgen Stock and other senior officials during a visit to the General Secretariat headquarters.

The Minister was briefed on INTERPOL’s range of policing capabilities and what support can be provided in combating crime areas including terrorism, migrant smuggling, cybercrime and corruption.

A participant in a wide range of operational activities, North Macedonia will host the INTERPOL European Regional Conference in 2023, when it will also celebrate 30 years of INTERPOL membership. 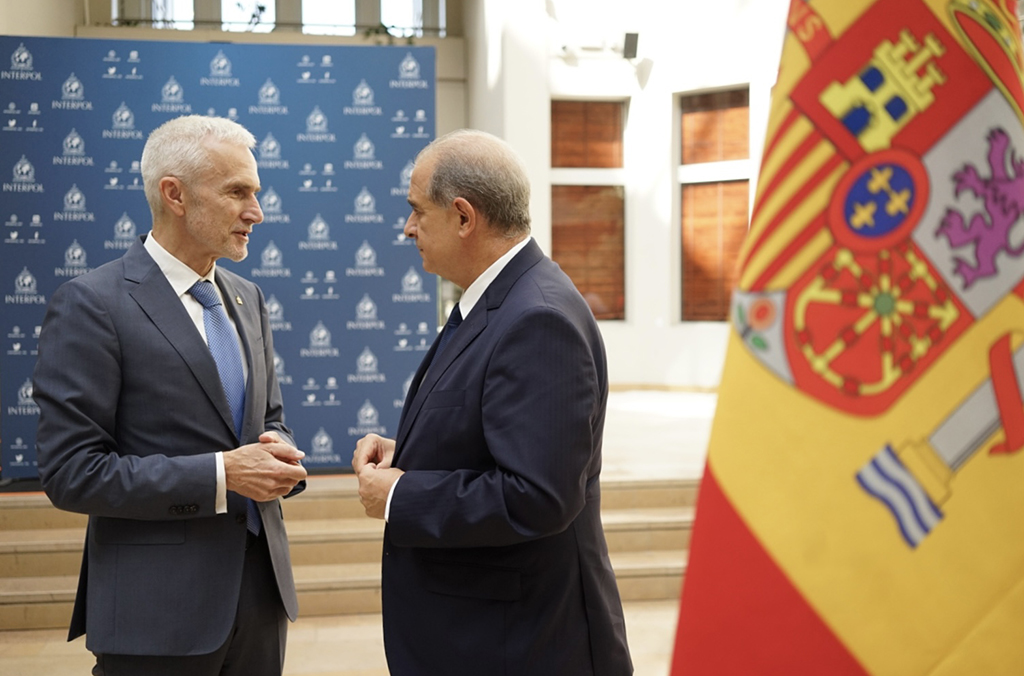 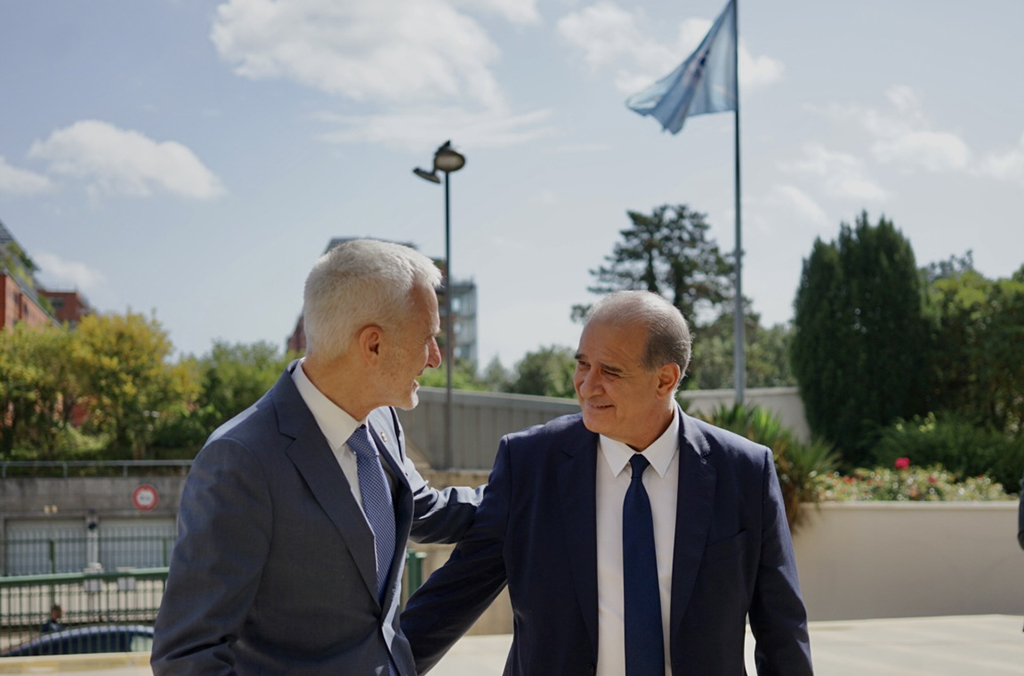 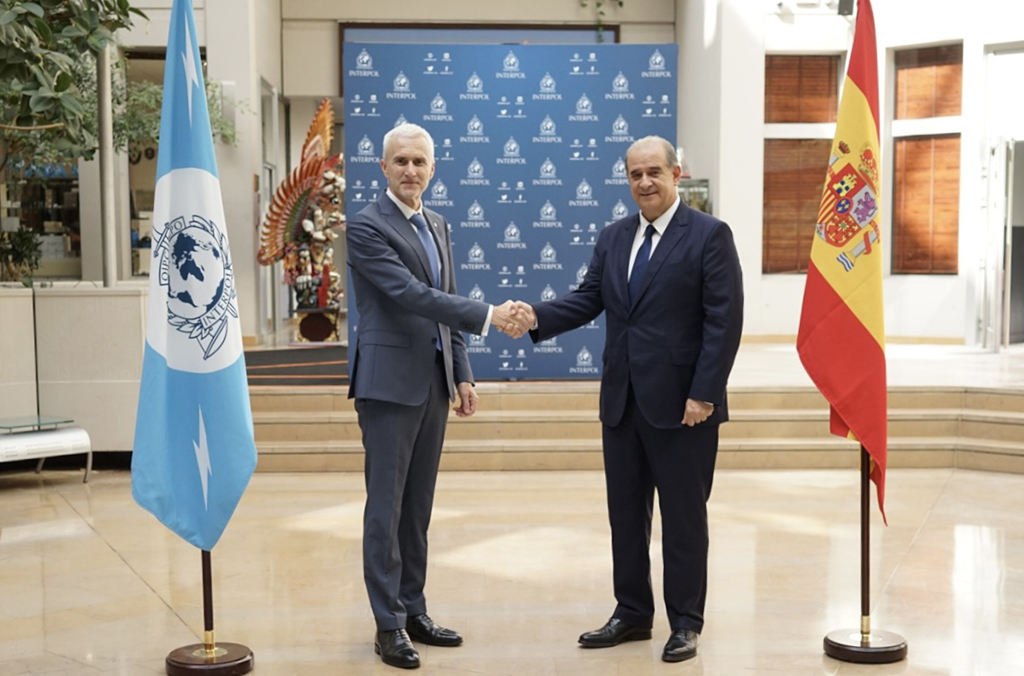 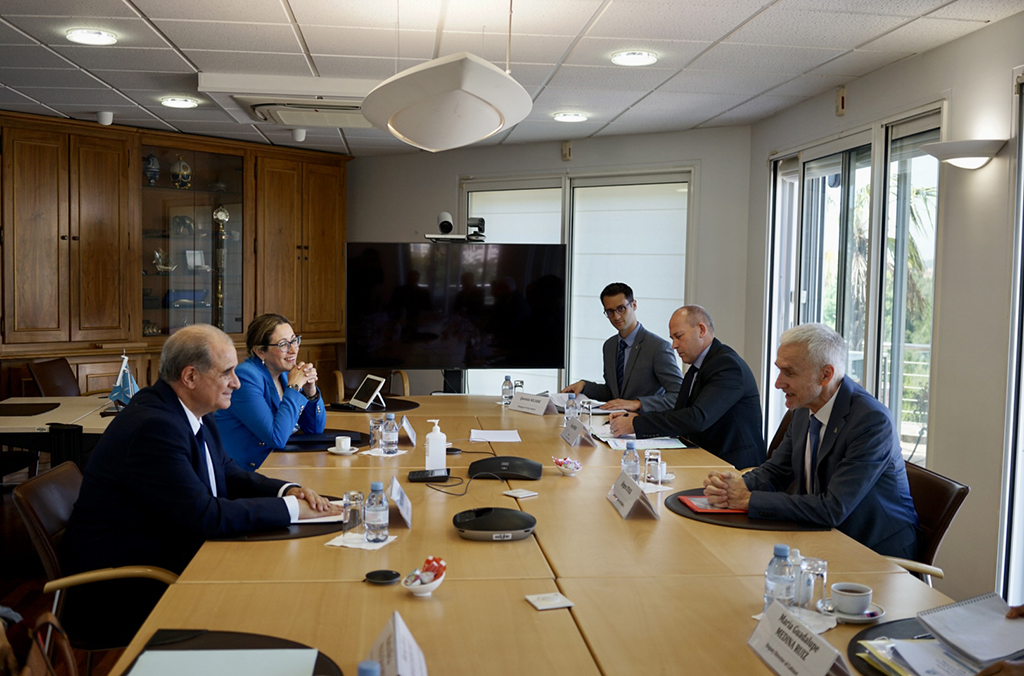 Spain is amongst the highest contributors of records to INTERPOL, in addition to being an active participant in a range of initiatives and operations.

These include INTERPOL Cooperation Against ‘Ndrangheta (I-CAN), Project Millennium, which identifies individuals and networks behind Eurasian transnational organized crime, and the annual Neptune operations aimed at strengthening maritime borders between North Africa and Europe. 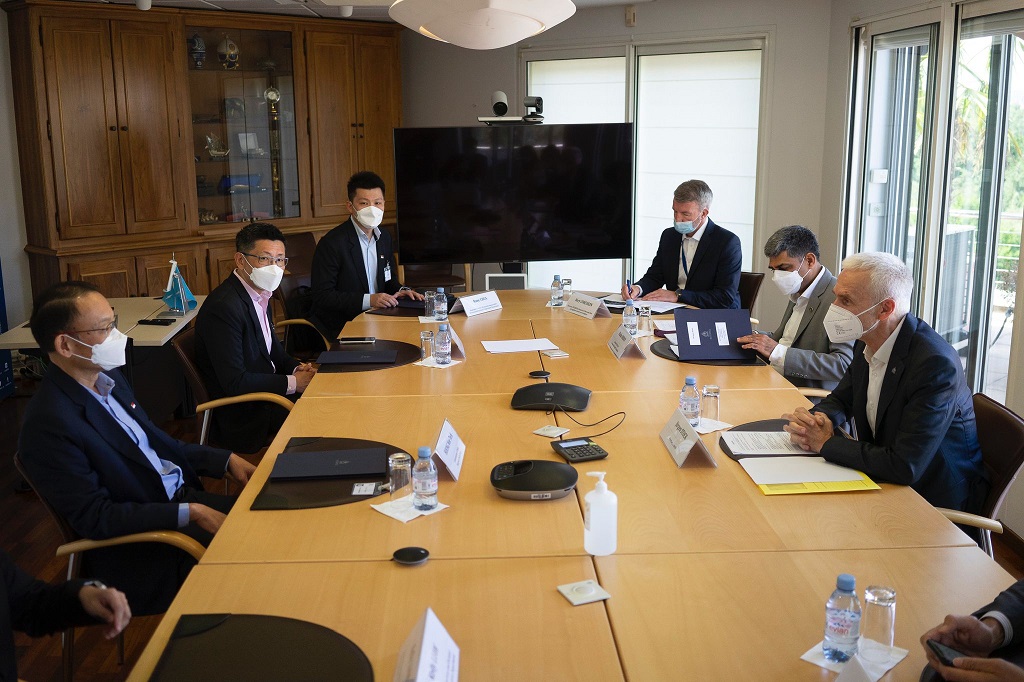 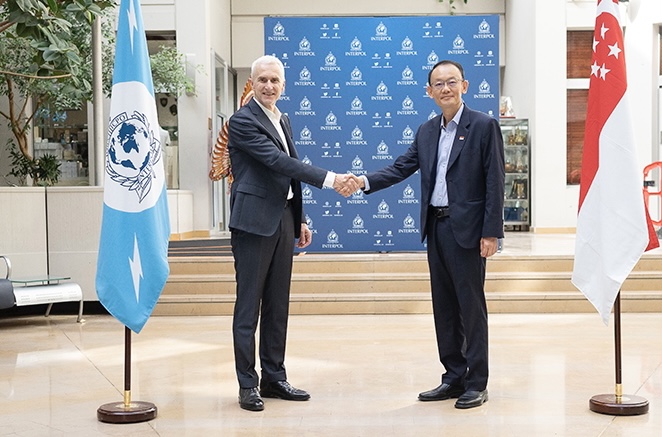 As host to the INTERPOL Global Complex for Innovation, Singapore is a long term strategic partner for the Organization.

Commissioner Hoong and his delegation were also briefed on INTERPOL’s ongoing organized and emerging crime initiatives, in addition to its analytical capabilities.

During their visit to the General Secretariat headquarters the CARICOM IMPACS delegation also held discussions with other senior INTERPOL officials on a range of issues, including initiatives to combat human, firearms and drug trafficking.

Following the signing of an agreement in 2021, a new INTERPOL liaison office will be housed by CARICOM IMPACS at its Barbados-based Joint Regional Communications Centre and will serve CARICOM and the wider Caribbean.

The liaison office will support greater police cooperation between each of the 25 Caribbean countries and territories and increase their use of INTERPOL policing capabilities in their national and regional investigations.

11 April 2022 – Moldova’s Minister of the Interior Ana Revenco met with INTERPOL Secretary General Jürgen Stock and other senior officials during a visit to the General Secretariat headquarters.

The Minister’s visit follows the first deployment of an INTERPOL Operational Support Team to provide on-the-ground assistance to law enforcement and humanitarian agencies in Moldova managing the large outflow of refugees entering the country from Ukraine. 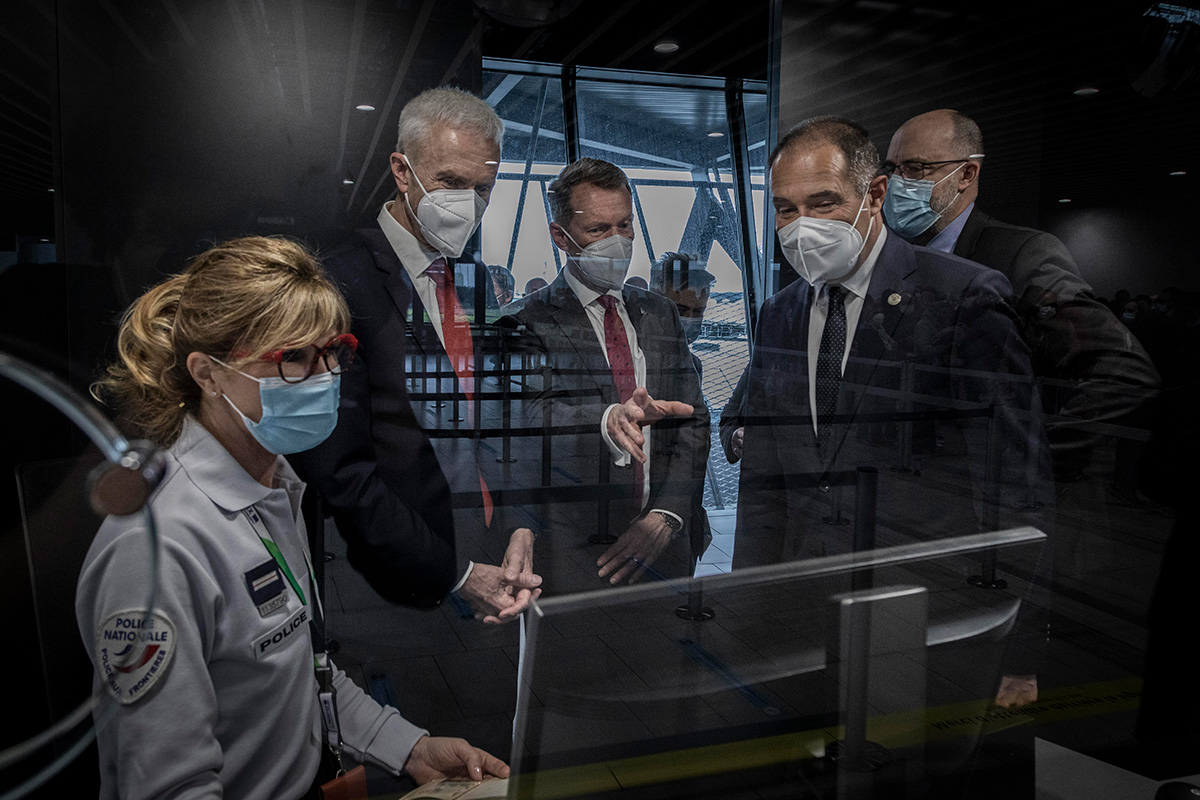 The joint initiative between INTERPOL and Frontex will support frontline police officers and border guards by providing visual information on the key markers that can indicate a counterfeit or forged document.

10 December 2021 – Slovenia’s Minister of the Interior Aleš Hojs met with INTERPOL Secretary General Jürgen Stock and other senior officials during a visit to the General Secretariat headquarters.

Slovenia was one of the first countries to automate INTERPOL database access for all frontline police officers, and today is one of the highest users of INTERPOL’s global databases.

Minister Hojs and his delegation were also briefed on INTERPOL’s I-Familia global database, the first of its kind, which helps identify missing persons based on international DNA kinship matching, when direct comparison is not possible.

Commissioner of the Somali Police Force 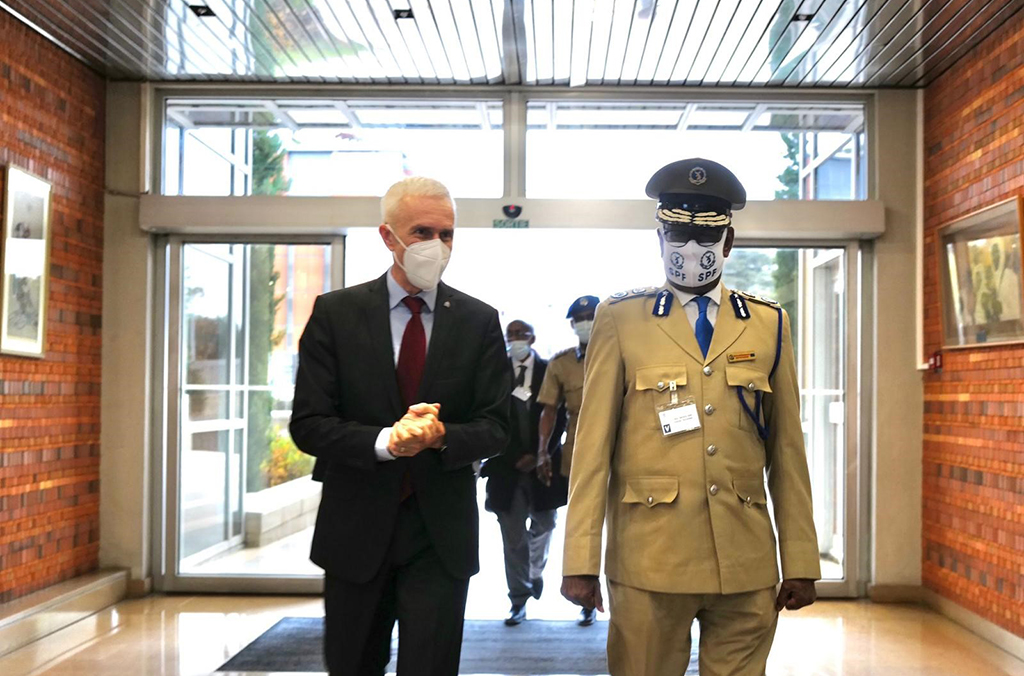 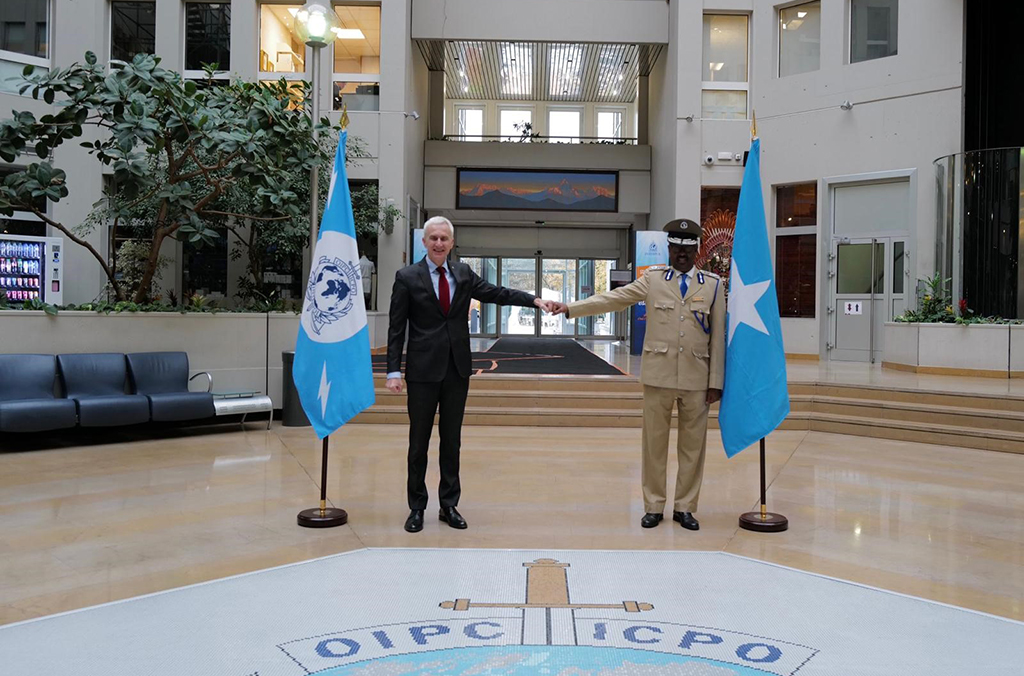 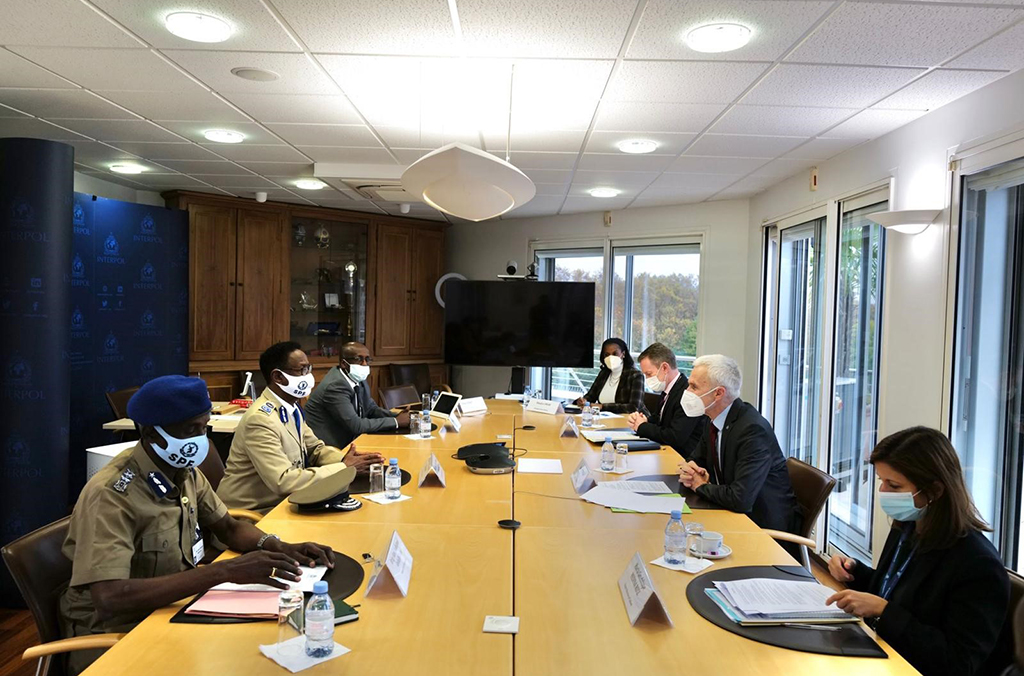 One of the main topics during the meeting was INTERPOL’s Counter-Terrorism initiatives and support for Somalia, in particular expanding access to INTERPOL’s databases to boost the ability of frontline officers at air, land and sea border crossings to detect potential terrorists or criminals.

Major General Mohamed was also briefed on INTERPOL’s assistance to member countries in identifying and dismantling criminal organizations in Africa, with particular emphasis on trafficking of human beings, money laundering and drug trafficking.

During his visit, the Commissioner visited INTERPOL’s Command and Coordination Centre, which provides round-the-clock support to the Organization’s 194 member countries.

Identifying areas for increased cooperation and additional operational support to tackle transnational crimes, particularly cybercrime, was a key issue in the discussions.

Mr Holzer was also updated on the range of INTERPOL’s policing capabilities including counter-terrorism and organized crime. 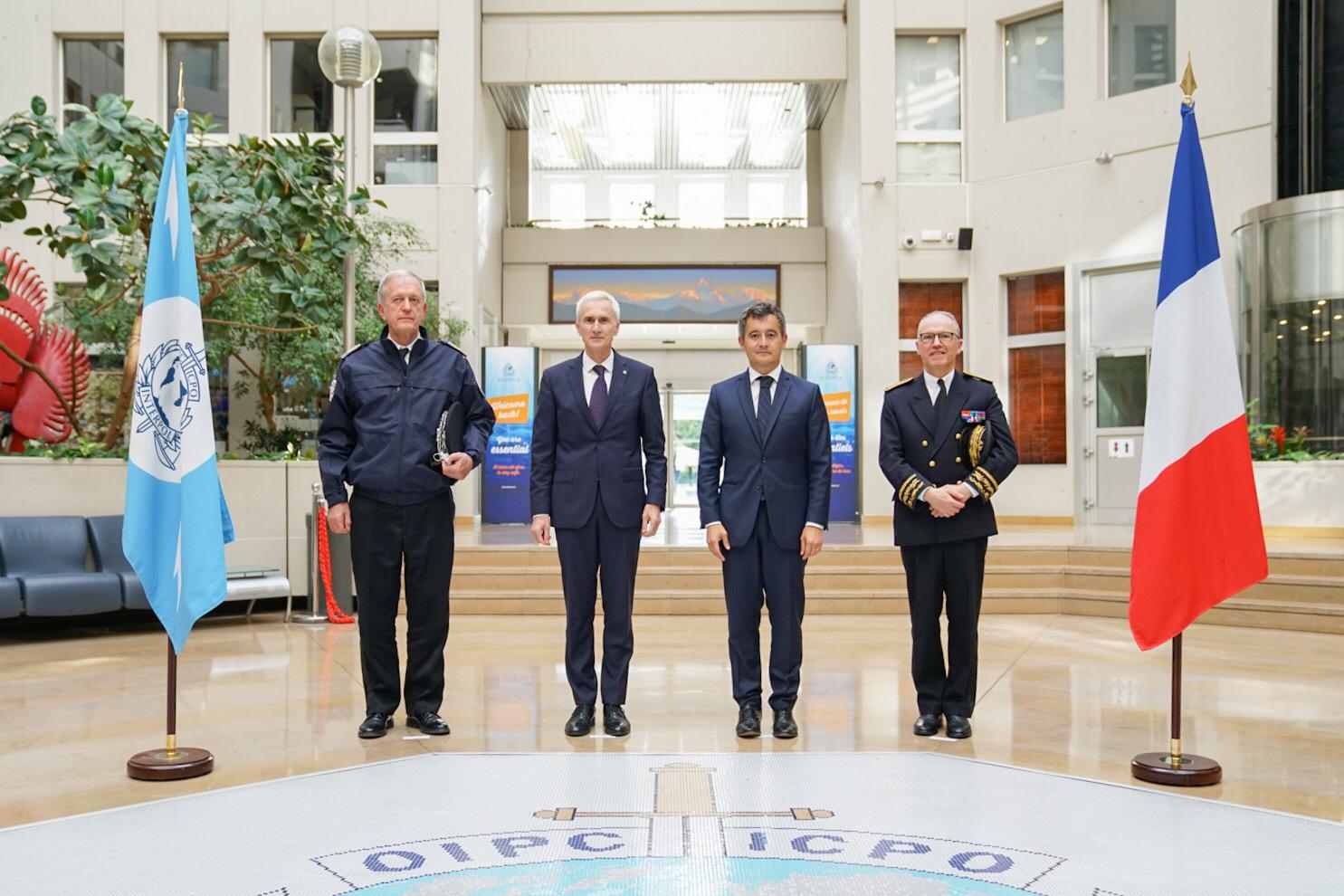 Accompanied by Prefect of the Auvergne-Rhône-Alpes region Pascal Mailhos and Director General of the French National Police Frédéric Veaux, the Minister was briefed on how INTERPOL’s global security architecture assists French national security.

The meeting at the General Secretariat headquarters was also an opportunity for Minister Darmanin and Secretary General Stock to discuss the outcomes from the recent G7 Interior and Security Ministers they both attended in London.

There have been close ties between INTERPOL and its host country, France, since establishing its General Secretariat headquarters first in Paris in 1946 and then in Lyon since 1989. 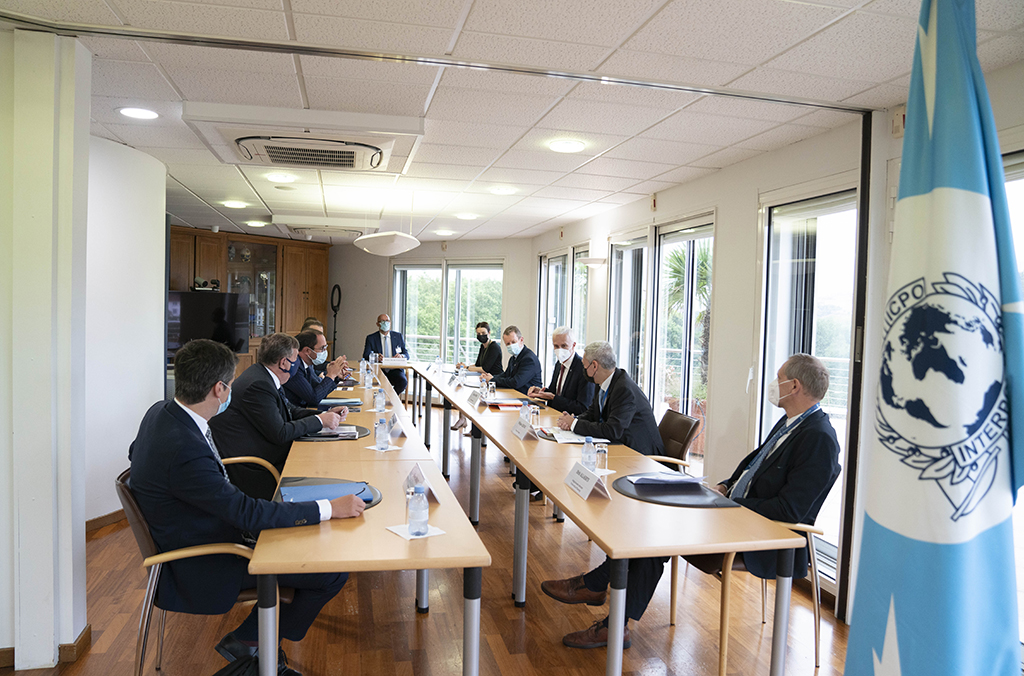 20 September 2021 – Belgium’s Deputy Prime Minister and Minister of Justice Vincent Van Quickenborne was updated on INTERPOL’s activities, including the newly launched I-Familia database during a visit to the General Secretariat Headquarters.

In discussions with Secretary General Jürgen Stock, the Minister was also briefed on INTERPOL’s activities in a range of crime areas including cybercrime, child sexual exploitation, financial and economic crime, and counter-terrorism.

INTERPOL’s I-Familia global database, the first of its kind, helps identify missing persons based on international DNA kinship matching, when direct comparison is not possible. It has already helped police solve a 16 year old cold case involving an Italian man who had been missing since 2004.

“In a world where crime doesn’t know borders, it is crucial to enhance international cooperation between law enforcement agencies. Belgium is interested to use the new I- Familia database. This database provides many new possibilities to identify missing persons and give answers to families,” said Deputy Prime Minister and Minister of Justice Van Quickenborne.

Secretary General Stock said the visit was also an opportunity to identify other areas for even greater cooperation.

13 September 2021 -  Khalid Al-Tijani Mazen, Libya’s Minister of Interior was welcomed to the General Secretariat headquarters by the head of INTERPOL, Jürgen Stock for discussions on a range of crime and security issues.

The Minister was also briefed by other senior INTERPOL officials on the Organization’s counter-terrorism initiative and areas of support to member countries in tackling illegal immigration networks and people smuggling, money laundering and corruption.

Operation Weka, which targeted human trafficking and migrant smuggling networks which resulted in the rescue of 500 victims and 195 arrests, and Operation Lionfish in which 17 tonnes of cannabis resin, valued at EUR 31 million, destined for Libya were confiscated in Niger.

Capacity building was also discussed during the Minister’s visit, with Libyan law enforcement officers benefitting from an INTERPOL training course on how best to exploit the Internet and specific social media sites in counter-terrorism investigations.