Our seven Global Policing Goals reflect our priorities against criminal and terrorist threats, in alignment with the United Nations 2030 Agenda for Sustainable Development.

In today’s complex world, security challenges are increasingly regional and global, with a direct impact on national security, and they threaten the sustainable development of society.

As the only police organization that works at the global level, INTERPOL plays a unique role in supporting international policing efforts.

To do this in a consistent manner across the world, it is important that all actors in the global security architecture share an understanding of the threats and work towards the same outcomes.

We developed seven Global Policing Goals (GPGs) to address a range of issues related to crime and security. Endorsed by our member countries in 2017, the Goals were officially launched in 2018.

Consistent with the Universal Declaration of Human Rights and the principle of neutrality (enshrined in Articles 2 and 3 of INTERPOL’s Constitution respectively), the Global Policing Goals are universal, ambitious and underpinned by collective action.

In 2018, the United Nations identified INTERPOL – in its capacity as the largest and oldest international law enforcement police organization in the world – as uniquely positioned to be the implementing partner of a number of the 2030 Sustainable Development Goals (SDGs).

Positive impact on the UN SDGs

INTERPOL’s General Secretariat published a report in 2020 to show the relations – both direct and indirect – between each of the seven INTERPOL GPGs and individual United Nations SDGs and their targets.

This analysis took into account the Organization’s three priority crime programmes (Counter-Terrorism, Organized and Emerging Crime, and Cybercrime), and its Strategic Framework. It demonstrates the positive impact of the GPGs through concrete examples of INTERPOL’s policing capabilities, operational activities and initiatives.

In some cases, all seven INTERPOL GPGs support the same UN SDG, due to the crosscutting nature of the SDG in question. This is particularly the case for SDG 5 (Achieve gender equality and empower all women and girls), and SDG 17 (Revitalize the global partnership for sustainable development). In other cases, the links between the GPGs and SDGs are more specific.

The Global Policing Goals focus the collective efforts of the international law enforcement community to create a safer and more sustainable world for future generations. 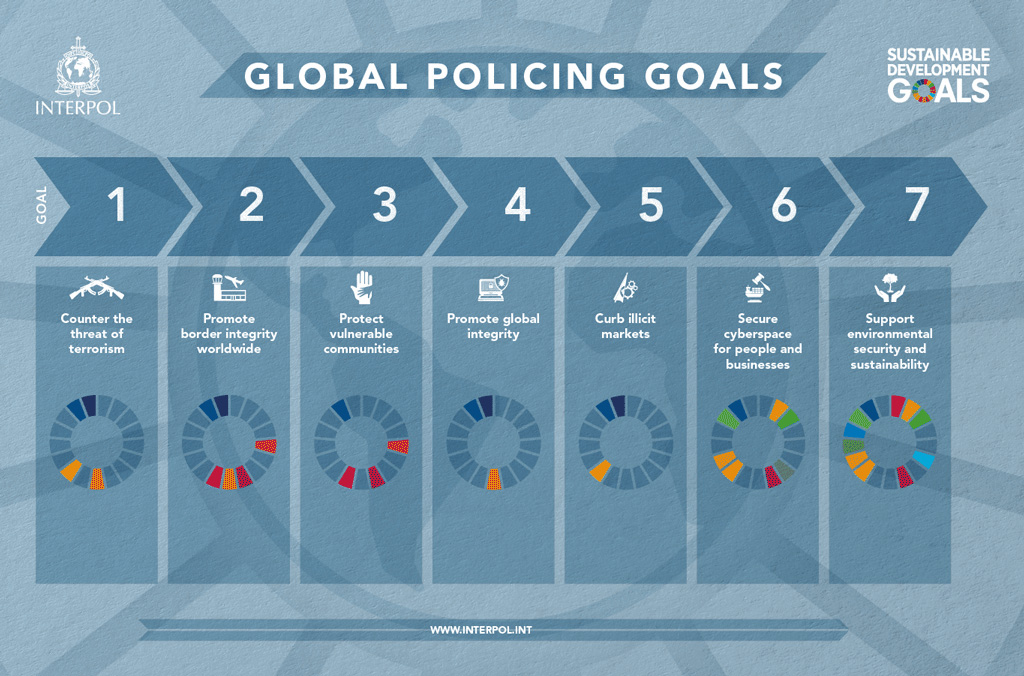 Goal 1: Counter the threat of terrorism