As historic players on the international stage, it is only natural for INTERPOL and the United Nations to join forces.

INTERPOL has enjoyed a special role – that of Permanent Observer at the United Nations - since 1996. First established by General Assembly Resolution 51/1, this status was formalized in a Cooperation Agreement in 1997.

INTERPOL-UN cooperation has since been enshrined in both UN General Assembly and Security Council (UNSC) resolutions, especially as concerns terrorism and human trafficking. We also combine our capabilities in the form of Special Notices issued to alert law enforcement to individuals and entities subject to UNSC sanctions.

Special Representative of INTERPOL to the United Nations

In November 2004, we opened the Office of the Special Representative of INTERPOL to the United Nations in New York. A subsidiary Permanent Observer Office opened at the UN Office in Vienna in 2018.

This physical proximity to two UN Headquarters allows us to more easily draw attention to areas where the UN can leverage INTERPOL’s tools and services, and explore cooperation opportunities in a more dynamic manner.

Our staff are in regular contact with United Nations agencies and the Permanent Missions of Member States to the United Nations. This networking ensures that the concerns of global law enforcement are adequately represented in international policies and initiatives, and in identifying potential partners. 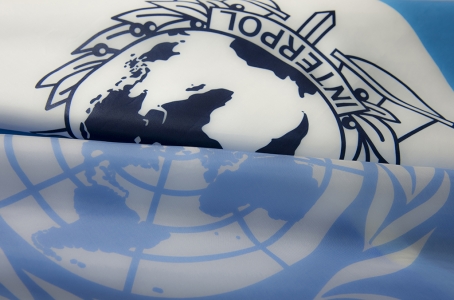 Counter-terrorism and human trafficking are among the priorities we share with the UN.

Our partnersCooperation with United Nations entities

We collaborate with a range of UN entities, notably the UN Office on Drugs and Crime.

Resolutions passed by the United Nations support and strengthen our role on the international stage.

These notices alert police globally to individuals and entities who are subject to sanctions imposed by the United Nations Security Council.