Role of the President

The President of the Organization is elected by the General Assembly for a period of four years.

INTERPOL's Constitution requires that the President:

The role of President is part-time and unpaid, with the holder retaining their full-time post within their national authority.

INTERPOL’s current President is Major General Ahmed Naser Al-Raisi, of the United Arab Emirates. Mr Al-Raisi was elected at the 89th General Assembly in Istanbul in November 2021 and will serve as President until 2025.

2015-present: Inspector General of the Ministry of Interior in the United Arab Emirates

2012-2015: Director General of Electronic Services and Communications - Ministry of Interior

2005-2015: Director General of the General Administration of the Central Operations at the Abu Dhabi Police

2001-2005: Director of the Information Technology and Communication Department at the Abu Dhabi Police

1992-2001: Head of the IT Section at the Telecommunications and Information Systems Department

Mr Al-Raisi served as a delegate on INTERPOL’s Executive Committee from 2018 to 2021. 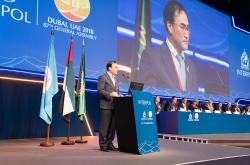