Organized criminals make 50-152 billion USD a year illegally cutting down invaluable tropical forests and their activities have detrimental consequences for sustainable development in rainforest nations and the global climate. 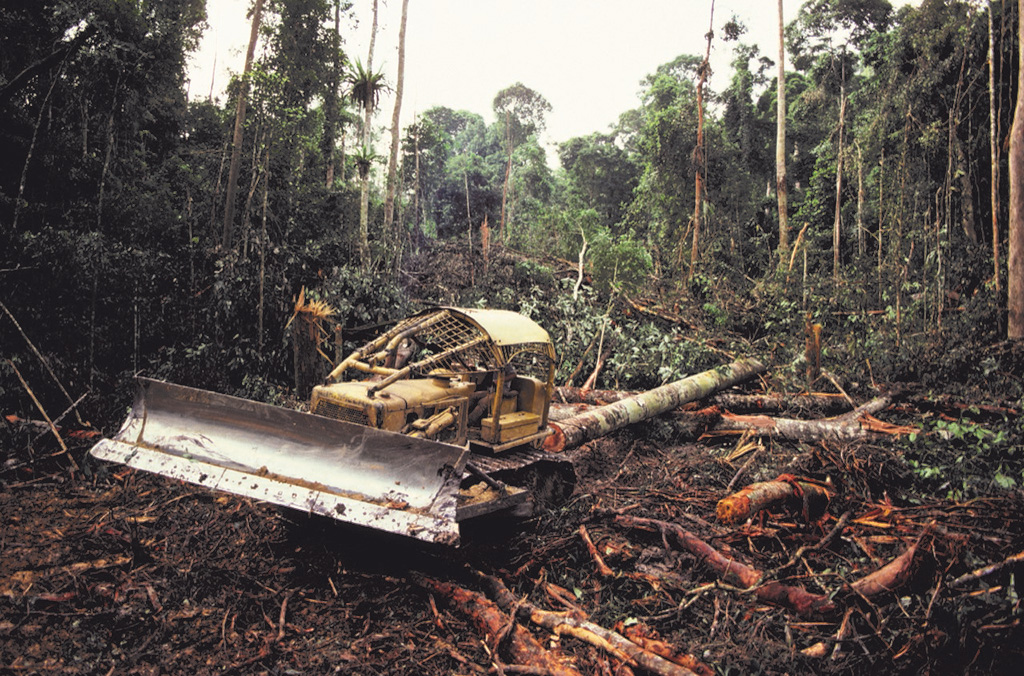 OSLO, Norway – The Norwegian Government announced today a pledge of up to Euros 15 million (145 million NOK) to a partnership between INTERPOL, the United Nations Office on Drugs and Crime (UNODC) and the RHIPTO-Norwegian Center for Global Analyses to combat illegal deforestation.

Halting and reversing land degradation and tropical deforestation could provide up to 30 per cent of the climate change solution.

Key rainforest countries have estimated illegal logging rates of anywhere between 50 to 85 per cent. This high number stems from the multiple opportunities of breaking the law throughout the whole deforestation value chain - from bribes, corruption and fake licences, to illegal land conversion, illegal export of timber and hiding the money in tax havens. Companies operating illegally, organized criminal groups and even cartels are destroying the planet's forests. The deforestation has vast impacts not only on climate change, but also on indigenous peoples living in the rainforests and the unique biodiversity that the rainforests are home to.

“It is paramount to scale up and intensify the battle against forestry crimes to reach national climate goals, the Paris Agreement and Sustainable Development Goals. In collaboration with ambitious partner countries, we will no longer permit criminals to perform massive destruction of tropical forests. Therefore, we will intensify the effort to stoop them through this extensive support to tackle forestry crimes.” said Ola Elvestuen, the Norwegian Minister of climate and the environment.

Illegal logging also fuels conflicts and is becoming a new  ‘safe ‘ criminal business for drug cartels and militant groups looking for alternative sources of incomes. A recent INTERPOL survey concluded that 84% of responding countries reported convergence of environmental crime with other crimes such as corruption, drug trafficking and cybercrime. More than 80% of the countries surveyed also report that combating environmental crimes is becoming a national priority. The programme will therefore also boost the efforts of the UN and INTERPOL in combating crimes in conflict and organized crime more broadly.

“Environmental crime has surged in recent years, generating billions in illicit profits for criminals, who are also involved in corruption, money laundering  and other forms of trafficking. Protecting the environment’s precious resources is our collective responsibility towards future generations. It is essential that decisive action is taken, and this project provides an effective platform to unite our efforts, “  said INTERPOL Secretary General Jürgen Stock, who pointed to the recent success of Operation Thunderstorm.

There is optimism that the initiative will actually make a real difference as has been seen before in individual countries. Currently the most significant example anywhere in the world in reducing deforestation was the 76% reduction in deforestation in Brazil in the last three decades. Joint operations led by the Federal Police in Brazil was a key strategic pillar for achieving this remarkable result.

“UNODC is dedicated to supporting the capacity of countries to combat transnational organized crime in all its forms by providing advice, mentoring, tools and training across the criminal justice chain, from seizures of illicit imports and exports, through investigation, prosecution and adjudication, to confiscation of criminal assets,” said UNODC Executive Director Yury Fedotov. “We are bringing to the table a strong network of professionals with a proven track record in helping countries to secure their global cargo shipments and to deprive criminal groups of illegally obtained money and proceeds of crime.”

Illegal deforestation is undoubtedly a threat of global proportions. In recent years INTERPOL operations have resulted in the seizure of more than 1 million cubic metres of illicit timber (worth in excess of USD 1.5 billion) across Africa, Asia and Latin America. INTERPOL and UNODC training of financial intelligence units has led to millions of dollars in assets being seized from criminals and returned to state budgets. RHIPTO reports through the UN Security Council have unravelled organized crime plundering natural resources such as timber, charcoal and gold worth USD 770 million annually in some of the world’s poorest countries – this has helped to energize the call for collective action for stronger enforcement of measures to prevent timber crime and action against those criminals who illegally cut down the world’s forests.

The three institutions will work together to share expertise, networks and efforts to jointly support the countries in Latin America and Southeast Asia This includes strengthening their capacity and  building national task forces  to support the frontline enforcement, investigation, prosecution and necessary customs efforts to prevent illegal deforestation, track illicit shipments and seize assets.

This work will also go hand in hand with wider efforts dedicated to combating deforestation and ensuring sustainable development through good practices and voluntary partnership agreements.

“When we know that criminal actions and sometimes even cartels are behind 50-90% of the tropical deforestation, we know they will not go away voluntarily.” said Christian Nellemann, Director at RHIPTO. “Some of these groups have previously engaged in drugs or fought in conflicts and some consist of corporations operating through shell and front companies in tax havens and also undermine sustainable forest related industries in tropical forest countries and across the World.”

INTERPOL is the world’s largest international police organization with 192 member countries. The mandate of the Organization is to facilitate international police cooperation and ensure that police around the world have access to the tools and services necessary to do their jobs. INTERPOL’s General Secretariat is based in Lyon, France, supported by the Global Complex for Innovation in Singapore, seven regional bureaus, and Special Representative offices at the African Union, the European Union and the United Nations. Each of the member countries maintains a National Central Bureau staffed by its own highly trained law enforcement officials.

UNODC (United Nations Office on Drugs and Crime) is mandated to assist Member States in their efforts against illicit drug trafficking, crime and terrorism. As the guardian of the UN Conventions against Corruption and Transnational Organized Crime, it provides technical assistance to criminal justice officials to fight transnational crime in all its dimensions. UNODC has its main office in Vienna and operates in all regions of the world through an extensive network of field offices. UNODC has a primary role to support the achievement of SDG 16- Peace, Justice, and strong Institutions.

RHIPTO-Norwegian Centre for Global Analysesis recognized formally by the UN as a cross-UN-collaborating centre to support with information and analysis on environmental crime, threat finance and maintain a rapid response capacity to the UN. RHIPTO was formed in response to UN Security Council resolution 2195 requesting member states to strengthen information and analysis support to the UN. RHIPTO maintains offices in Norway, London and Paris.

The project is funded under NICFI. The Norwegian government supports global efforts to reduce destruction of tropical forests. It aims to halt greenhouse gas emissions from deforestation and forest degradation in developing countries. Norway’s international Climate and Forest Initiative (NICFI) leads these efforts from the Norwegian Ministry of Climate and Environment. 2017 marks that ten years since Norway launched Norway’s International Climate and Forest Initiative (NICFI). Norway’s Prime Minister Jens Stoltenberg announced at the UNFCCC Climate Change Summit COP13 that Norway would allocate up to 3 billion NOK annually to reduce deforestation. While the initiative was originally thought to last until 2020, the Norwegian government has since promised to extend it through 2030. Norway has so far supported efforts to reduce deforestation in more than 70 countries.  Reducing deforestation will also be an important instrument to achieve the objectives of the Paris Agreement. After ten years of concerted efforts, Norway now aims to focus on countries with large tropical forests and countries proving results.