INTERPOL’s global response to crimes in the fisheries sector

LYON, France – A recent case involving the conviction of the captain of an illegal fishing vessel in Indonesia highlights the challenges of tackling fisheries crime and the role of INTERPOL in providing a coordinated international response.

In August, a court in Indonesia ruled that the vessel STS-50 – which was detained the previous month in Indonesian waters – was engaged in illegal fishing activities and the captain, a Russian national, was ordered to pay a fine of IDR 200 million (approximately EUR 12,000).

INTERPOL plays a global coordination role in supporting the international aspects of such investigations, as fisheries-related crimes typically cross multiple jurisdictions. For example, the countries of registry (which can change many times throughout the lifespan of a vessel), where the company insuring the vessel is located, where the fishing occurs, where a vessel comes to port, where any fish stocks are loaded off the vessel or sold, and the countries of nationality of the captain and crew can all be connected to a single fisheries crime investigation.

“Crimes involving the fisheries sector are wide-ranging, affect all regions of the world and have a significant impact on the environment, economy, and national and regional security,” said Paul Stanfield, INTERPOL Director of Organized and Emerging Crime.

“Through the Global Fisheries Enforcement team, INTERPOL provides its member countries with comprehensive assistance in investigating fisheries crime, identifying linked crimes and ensuring the perpetrators are brought to justice,” he concluded.

In the Indonesian case, INTERPOL liaised with the relevant National Central Bureaus (NCBs) to identify fraudulent registry documents used by the vessel – known for illegally poaching the lucrative toothfish and operating under several different names and flags – to help establish a legal basis for its detention.

The vessel was also the subject of an INTERPOL Purple Notice issued at the request of the New Zealand authorities in 2017. Purple Notices are global police alerts issued by INTERPOL ‘to seek or provide information on modus operandi, objects, devices and concealment methods used by criminals’. They are an important tool of the Global Fisheries Enforcement initiative as they allow police worldwide to share information about vessels known or suspected of engaging in illegal fishing activities.

As the vessel attempted to evade detention while traveling from East Asia to Africa and back to Southeast Asia, INTERPOL coordinated the exchange of information and intelligence reports to national authorities along the suspected travel route, eventually leading to its capture in Indonesia. An investigative case meeting was then convened, another INTERPOL tool which brings together authorities from the relevant countries to discuss the evidence, prosecution and continuing investigations. 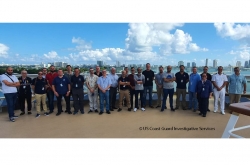