How INTERPOL supports the UK to tackle international crime.

The globalized nature of serious and organized crime is arguably the single greatest threat to UK national security, killing more British citizens each year than terrorism and natural disasters.

The international characteristics of organized crime make the role of the INTERPOL National Central Bureau (NCB) in the United Kingdom fundamental to maintaining national and regional security.

INTERPOL in the United Kingdom

The United Kingdom’s INTERPOL NCB is located in Manchester. It plays a central role in protecting the country and surrounding region from the threat of international organized crime.

The NCB plays a key national role in tackling the serious crime areas which affect the country most, including crimes against children, fugitive investigations, financial crime and trafficking in human beings.

The UK does not have a national police force. Instead, there are 44 geographic forces in England and Wales, and a single force in Scotland and one in Northern Ireland.  Specialist police forces that work alongside the geographic forces include the British Transport Police, the Ministry of Defence Police and the Civil Nuclear Constabulary.

INTERPOL Manchester and the NCA help the UK fight international crime through the coordination and provision of specialist support to investigations, using INTERPOL channels to build effective partnerships between the UK police forces and law enforcement agencies worldwide. 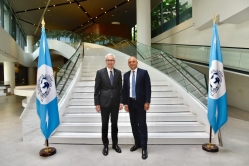