Agroterrorism is a subset of agrocrime. It can be understood as terrorist attacks directed against crops and livestock, in an effort to disrupt a population’s economy and food supply.

The spread of diseases in animals

The deliberate release of biological agents is perhaps the best-known challenge for law enforcement when it comes to infectious diseases spread.

However, law enforcement agencies also have a role in countering crimes that contribute directly or indirectly to the spread of diseases.

Such crimes are wide-ranging. Some may be small in scale and local, while others are widespread and driven by organized crime groups:

Animal-related crimes have the potential to spread animal diseases – either accidentally or intentionally – among wildlife, livestock and domestic animals.

Inevitably, this has a negative impact on people’s livelihoods and countries’ economies. For example:

From animals to humans

Scientists estimate that up to 75% of emerging infectious diseases are zoonotic in nature, in other words they affect both animals and humans.

This means that animal diseases can spill over into the human population, as seen with the plague, avian flu, COVID-19 and Ebola.

With greater numbers movements of animals and people than ever before, infectious diseases can be disseminated more easily across larger areas. Uncontained disease events in one region can soon turn into an international crisis.

The outbreak of COVID-19 highlighted the ease and speed with which an infectious disease can spread across borders.

It also demonstrated the way in which a major disease outbreak can be exploited by criminals to make a profit.

Although COVID-19 is mainly a human pandemic, any major animal disease outbreak can be exploited in the same way by criminals and terrorists.

Major disease outbreaks are of concern to both veterinary services and law enforcement agencies. The two sectors need to work together at national, regional and international levels to prevent, prepare and respond in a common approach to protect the public.

At INTERPOL, we are working with partners to promote such cooperation.

To this end, we signed a Memorandum of understanding in March 2022 with the World Organisation for Animal Health (WOAH).

A joint project – Building resilience against agrocrime and agroterrorism – seeks to strengthen multi-sectoral capacity to respond to animal health emergencies. The project is funded by Global Affairs Canada, under the Global Partnership against the Spread of Weapons and Materials of Mass Destruction, and implemented in partnership with the:

We have set six goals for improved collaboration between law enforcement and veterinary services. These aim to: 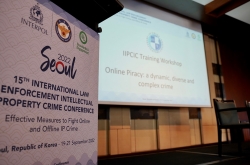