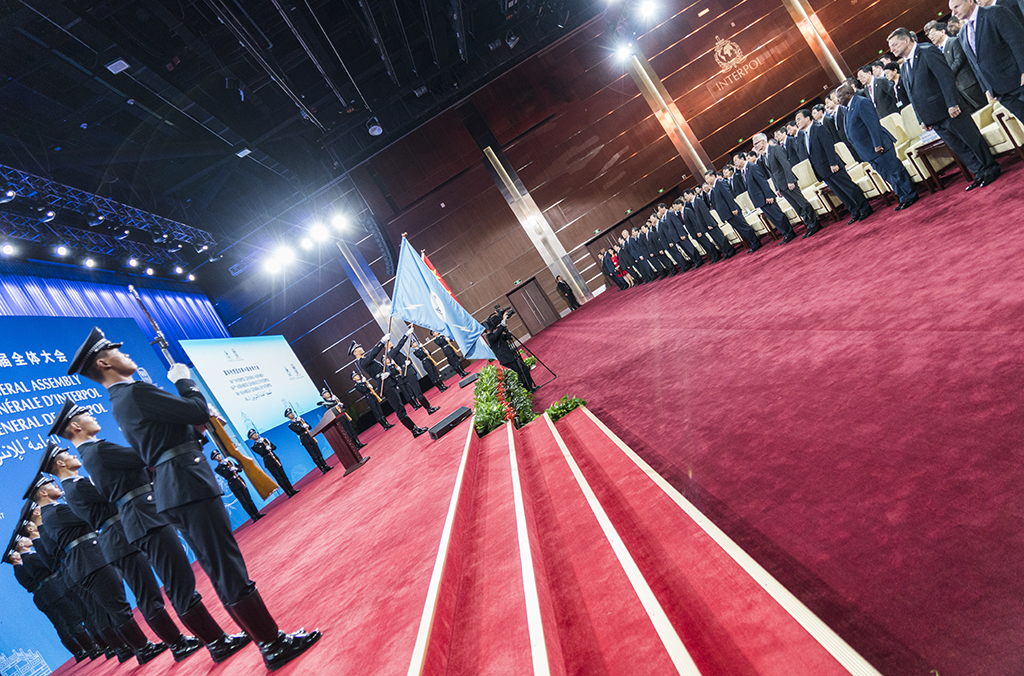 With nearly 1,000 participants from 156 countries, making it one of the largest General Assemblies in the Organization’s history, the four-day (26 – 29 September) conference will see police thought leaders forge operational alliances to tackle the crime threats of today and tomorrow.

Among the key issues to be addressed by delegates, including 62 police chiefs and more than 30 Ministers of Security, Interior and Justice, is the importance of frontline officers having real-time access to global policing data through a single and neutral platform.

This was highlighted earlier this month with the arrest of two Foreign Terrorist Fighters who were the subject of Red Notices, or international  wanted persons alerts, following checks against INTERPOL’s databases by West African border officials.

In his address to delegates President Xi said cooperation was essential to the safety and security of citizens everywhere.

“No country can guarantee its absolute security all by itself. China stands ready to closely cooperate and collaborate with INTERPOL members and international organizations to take an active part in global security and make a new and greater contribution to peace and the development of mankind,” said President Xi.

Outlining some of the challenges facing police, INTERPOL President Meng Hongwei said: “Cooperation is embedded in the genes of the Organization, just as neutrality is its lifeline. We must hold dear the cooperative and neutral spirit in the same way as we cherish our lives.

“Security is a basic need for human survival, the common denominator of all countries. The crimes we see are no longer what a country can solve alone. It is imperative that police help each other, because it is helping ourselves,” concluded President Meng.

INTERPOL Secretary General Jürgen Stock said with national policing resources stretched as never before, maximizing the use of existing trusted networks both regionally and internationally was essential.

“Every additional record made available across borders builds a new opportunity, but every piece of information left unexploited creates a new risk,” said Secretary General  Stock.

“As criminals and terrorists continue to exploit every loophole available to them, the law enforcement community must remain flexible and use every resource available to address these evolving threats,” concluded Mr Stock.

Secretary General Stock  pointed to results achieved following checks against INTERPOL’s databases in the past two weeks alone, including:

In addition to being updated on the Organization’s three global threat programmes on counter-terrorism, organized and emerging crime and cybercrime, delegates at the General Assembly will also consider new criteria and process for membership of INTERPOL.

The findings of a membership study carried out by the former United Nations Under-Secretary-General for Legal Affairs and Legal Counsel, Hans Corell, will be presented to delegates for a vote.

There are currently two applications for INTERPOL membership, from the State of Palestine and the Solomon Islands.