DNA can play a crucial role in convicting – or clearing – suspects of a crime, and can also be used to identify missing persons.

Deoxyribonucleic acid (DNA) molecules contain the information all living cells in the human body need to function. Apart from identical twins, each person’s DNA is unique.  As such, it can be used as evidence to help convict a suspect of a crime, but also to clear an innocent person.

Samples from crime scenes or suspects, usually obtained from blood, hair or body fluids, are analysed, resulting in a DNA profile which can be compared against other profiles within a database.

This creates the opportunity for ‘hits’ – person-to-scene, scene-to-scene or person-to-person matches – where no previous connection was known.

DNA can also be used to identify victims of disasters, locate missing persons, and even pinpoint from where trafficked goods such as ivory or wood originated.

Our DNA database can match profiles in just minutes to internationally link and solve crimes such as rape, murder and armed robbery.

Police can submit a DNA profile from offenders, crime scenes, missing persons and unidentified human remains, with a search result provided within minutes. Our database has enabled investigators around the world to link offenders to different types of crime including rape, murder and armed robbery.

There is no nominal data attached to the profile, which is submitted in the form of an alphanumerical code. Member countries retain ownership of the information, in line with our rules on the processing of data. Countries can also choose which other countries they share their data with.

Searching for missing persons in their home country may not be enough; sometimes international police cooperation is needed to find them. In the event of a body being found, INTERPOL can use DNA to identify them.

We compare the DNA profile of the unidentified body with that of the missing person to see if they match. The missing person’s DNA sample can be taken from personal items such as toothbrush or hairbrush.

Where a direct DNA profile of the missing person cannot be taken, DNA samples from consenting family members can be used to help identify a relative that is missing. This is done through our separate service for family DNA matching, known as I-Familia.

DNA analysis was first used in police investigations in the mid-1980s; since then it has been applied to a growing range of criminal enquiries, including environmental crimes.

DNA samples from seized ivory can be analysed to identify the original herd and geographic region, and potentially identify the criminal networks behind large-scale elephant and rhino poaching.

With the global illicit trade in timber worth billions of dollars every year, DNA analysis is also showing great potential for accurately identifying the species and origin of seized timber specimens, even down to an individual tree. 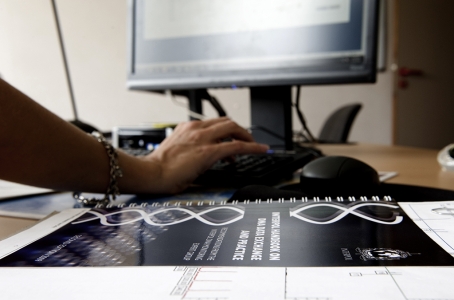 What is a DNA profile?

DNA is a molecule that is found in most cells of the human body. Some regions of this molecule (genes) carry information that serves as a code for our individual traits such as eye colour. However, most of our genetic makeup is “non-coding DNA” which varies greatly among non-related individuals and as such, serves as a basis for individualisation.

DNA is extracted from a sample by forensic biologists in specialised laboratories.  Each country decides which tools their laboratories will use to analyse the genetic markers, known as Short Tandem Repeats. The combination of markers constitutes a DNA profile; different tools may target different markers but there is sufficient overlap to allow for comparison between countries.

How is a match made?

Member countries submit DNA profiles to our DNA database which then performs a search. The profile is given a reference number by a member country and no nominal information is entered into the database.

If that profile is already in our database because another country has previously submitted it, then the search result is positive. In this case, we inform both countries about the match, and we invite them to pursue the investigation once the two countries have verified the database hit.

INTERPOL Best Practice Principles: Recommendations on the use of DNA for the identification of missing persons and unidentified.pdf241.17KB
EN