BRASILIA, Brazil – Evidence uncovered by INTERPOL Task Force investigators in Brazil has led to the identification of 66 victims of child sexual abuse.

During the five-day (21 – 25 October) exercise by the INTERPOL Victim Identification Task Force, investigators from 11 countries in Latin America reviewed cases in the INTERPOL International Child Sexual Exploitation (ICSE) database with possible links to the region.

With new investigative information shared and added to the database, the meeting also resulted in the identification of 14 perpetrators of child abuse and provided new leads to ongoing cases.

“However, we must not forget that there are still many more children in harm’s way. This just reinforces the importance of using the ICSE database to its full potential and ensuring as many countries as possible are connected so that critical links between cases can be revealed,” he added.

This was the first victim identification task force meeting held in Latin America. It was organized by INTERPOL’s Crimes Against Children unit and the Brazilian Federal Police, with support from the INTERPOL Regional Bureau for South America and the United Nations Office on Drugs and Crime (UNODC).

Following this successful meeting, the annual gathering of the INTERPOL Specialists Group on Crimes Against Children will take place this month at the INTERPOL General Secretariat in Lyon, France.

Investigators from more than 50 countries use the database to exchange information with colleagues around the world to retrieve clues, identify any overlap in cases and combine their efforts to locate victims of child sexual abuse. 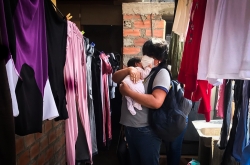