LYON, France – Two members of a criminal network engaged in telephone and email fraud have been extradited from China to South Korea, as part of an ongoing operation coordinated by INTERPOL.

Operation First Light, first held in 2014, targets telecom fraud and other types of social engineering scams, as well as money laundering of the illicit proceeds. Launched in September 2019, some 37 countries and territories are participating in the latest edition to identify and locate illicit call centres engaged in the fraud scams.

Under the auspices of the operation, INTERPOL facilitated a bilateral meeting between its National Central Bureaus (NCBs) in China and South Korea in November 2019 where the countries shared intelligence on transnational telecom fraud.

Following the meeting, police in Suzhou, China dismantled a criminal network engaged in telephone scams targeting victims in South Korea and arrested seven South Korean nationals, three of whom were the subjects of INTERPOL Red Notices. Two were extradited back to South Korea in July following extensive coordination between the two NCBs, with the remaining extraditions impending.

“The current wave of Operation First Light has faced unexpected challenges due to the pandemic, but we were still able to achieve a successful outcome thanks to close cooperation between the NCBs in Beijing and Seoul and the use of Red Notices alerting to the wanted individuals,” said Duan Daqi, Head of NCB Beijing.

“This success demonstrates once again the strong determination of police in China and across the region to jointly fight against transnational crime, including telecom fraud,” added Mr Duan.

Organized by INTERPOL’s Financial Crime unit with support from regional policing bodies Europol and ASEANAPOL, the current wave of Operation First Light began in September 2019 and has been extended through March 2021 due to the COVID-19 crisis, to allow the participating countries sufficient time to exchange information, follow up on new intelligence and identify suspects.

In one such case, INTERPOL, Europol and the NCB in Budapest identified money transfers from a Hungarian-based company to three bank accounts in Hong Kong totaling some USD 8.6 million that were made as a result of BEC fraud. With the assistance of the INTERPOL Sub-Bureau in Hong Kong, the transfers were halted and the funds returned the same day.

More than EUR 4.2 million sent by a German-based company to a Hong Kong bank account as a result of another BEC scam was successfully recovered.

“The cross-border nature of these crimes requires an international response, which is why INTERPOL is ideally placed to assist member countries provide an effective response,” said José de Gracia, INTERPOL’s Assistant Director of Criminal Networks.

“The successes we’ve seen so far during Operation First Light have been possible due to a high level of commitment by the involved countries, which have dealt a substantial blow to the syndicates seeking to trick innocent victims into handing over their money,” added Mr de Gracia.

Based on the criminal modus operandi identified as part of the operation, INTERPOL has issued three Purple Notices – on telephone scams, investment fraud and fraud schemes taking advantage of the COVID-19 pandemic. 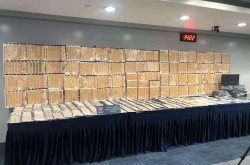