Codenamed “Thunder 2022”, the month-long (3-30 October) operation brought together police, customs, financial intelligence units, wildlife and forestry enforcement agencies from 125 countries - the largest number of countries to take part in a Thunder operation since the series started in 2017.

Through routine inspections and targeted controls, hundreds of parcels, suitcases, vehicles, boats and cargo transporters were examined, often with the use of sniffer dogs and X-ray scanners.

CITES is an international agreement to ensure that trade in wild animals and plants does not threaten their survival. All trade performed in breach of CITES is illegal.

Seizures ranged from timber to live animals, as well as animal parts, bushmeat, and derivatives such as clothing, beauty products, food items, traditional medicines and handicrafts. 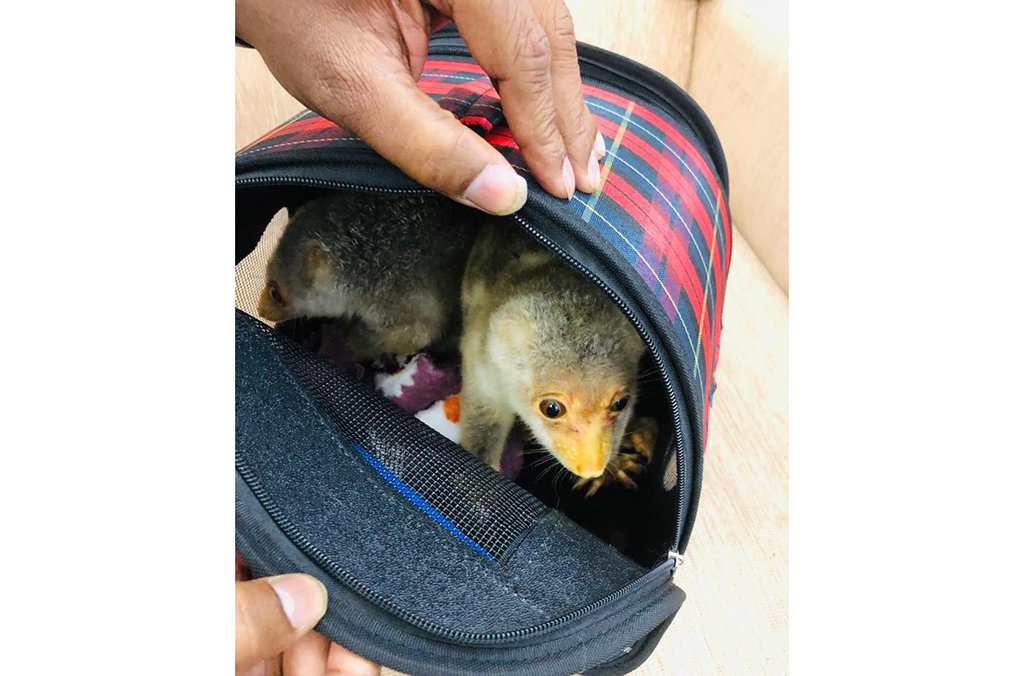 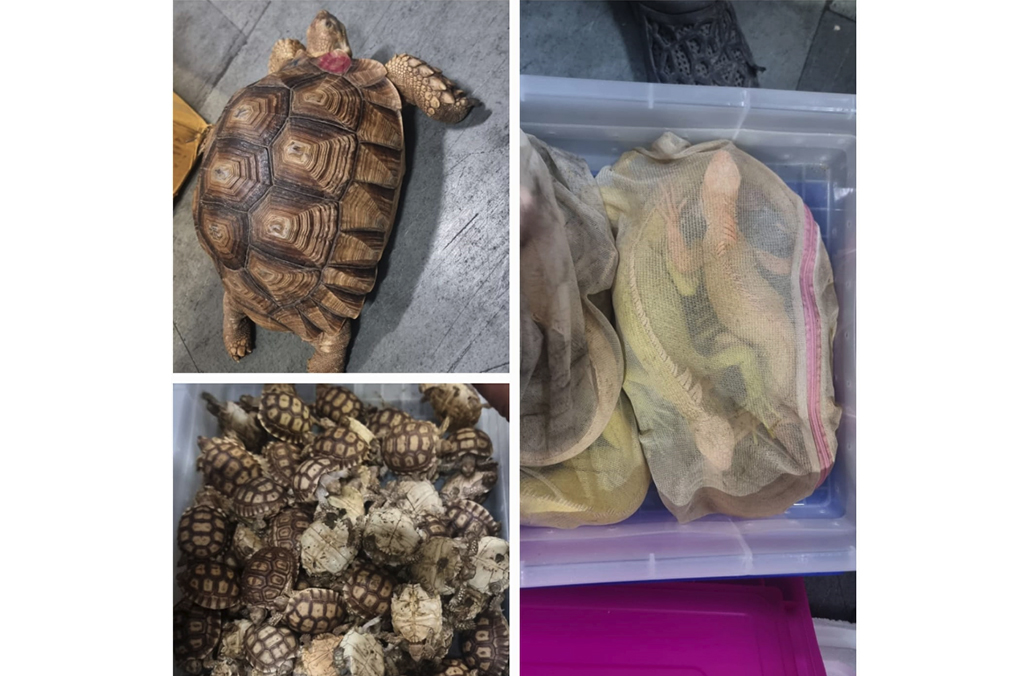 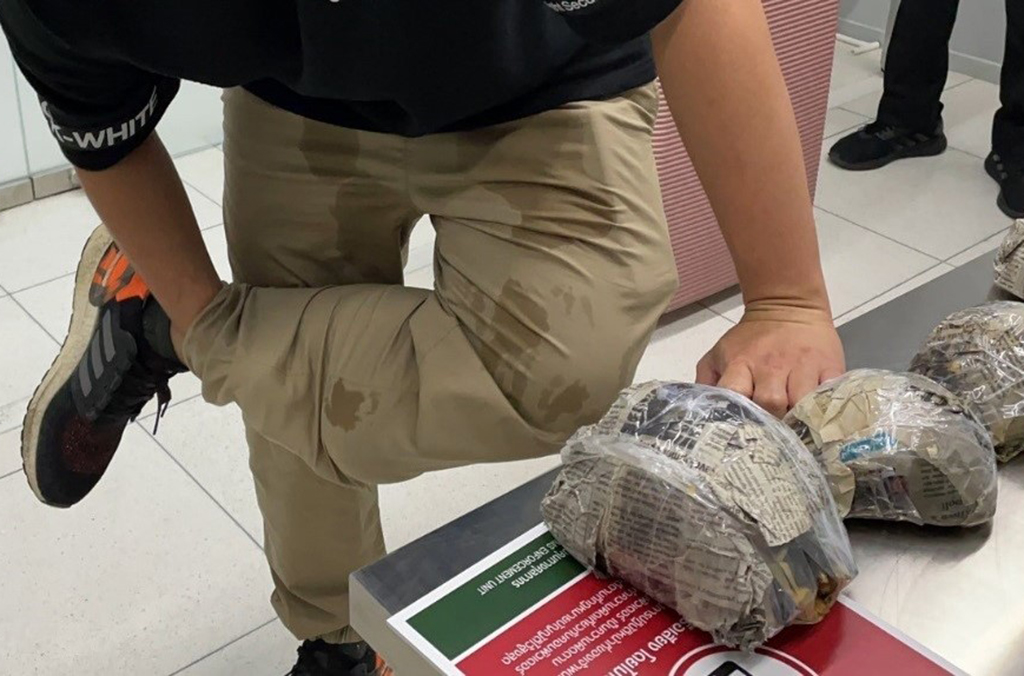 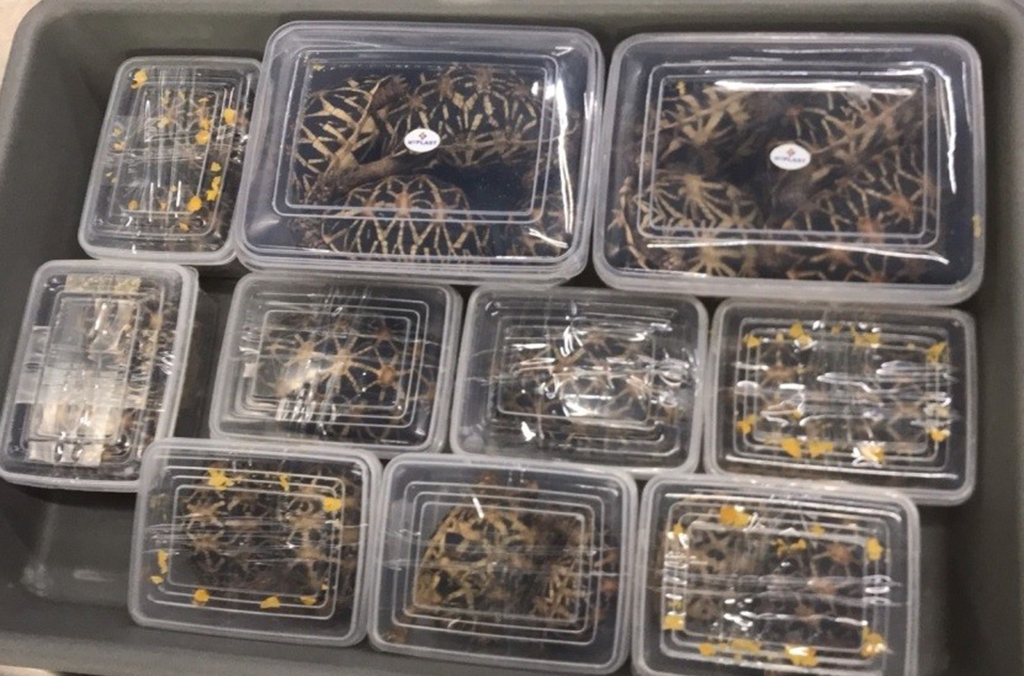 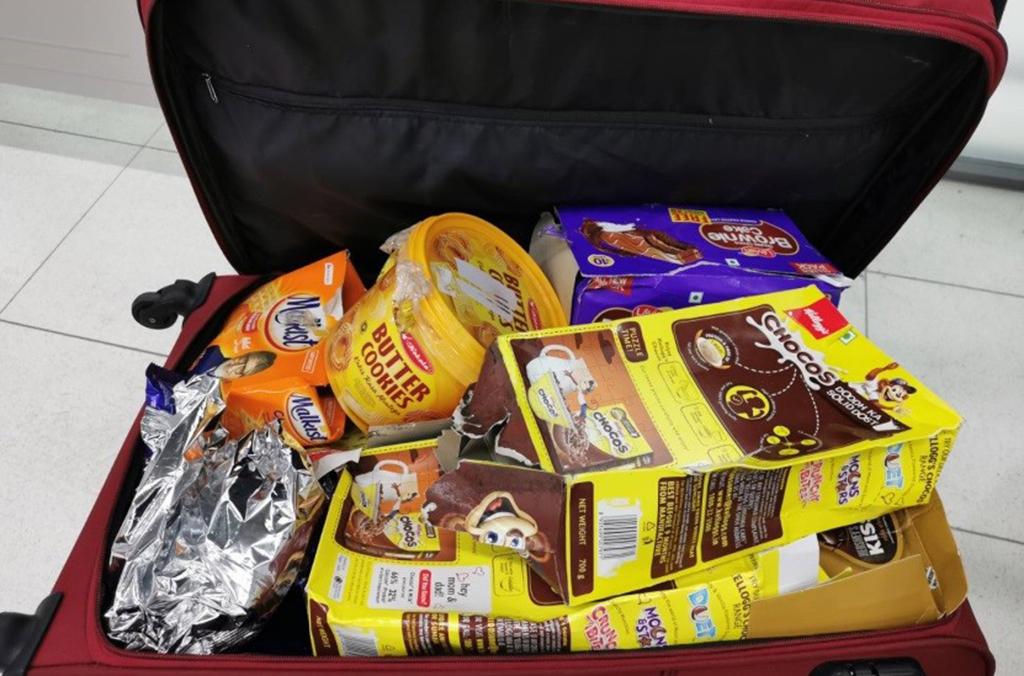 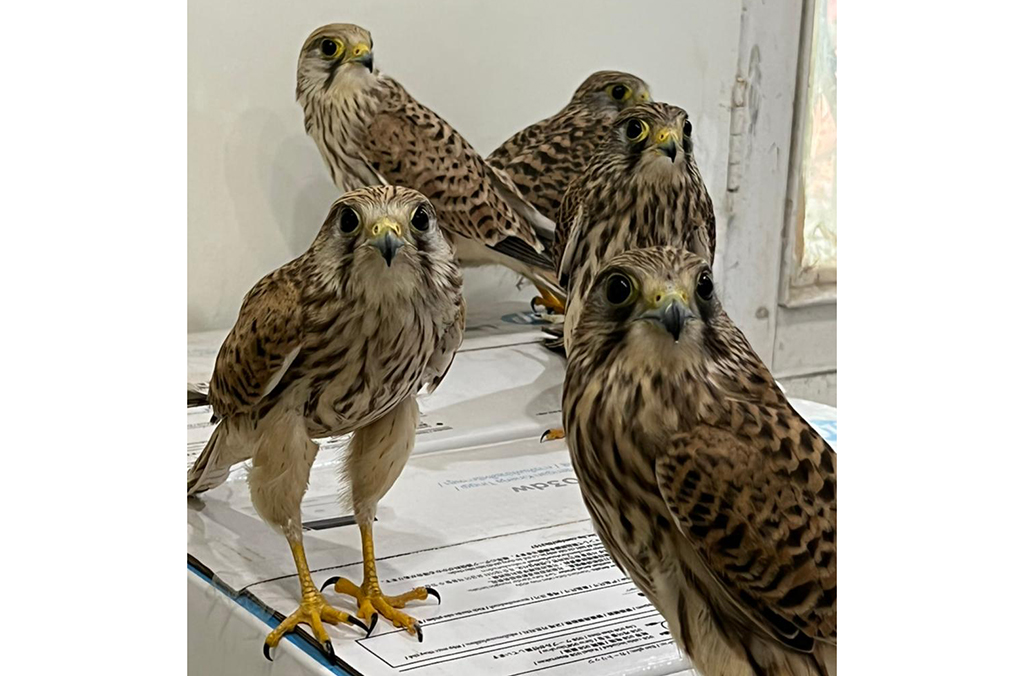 A total of 750 birds were seized during Operation Thunder 2022, including here in Pakistan where authorities intercept the smuggling of young birds of prey. 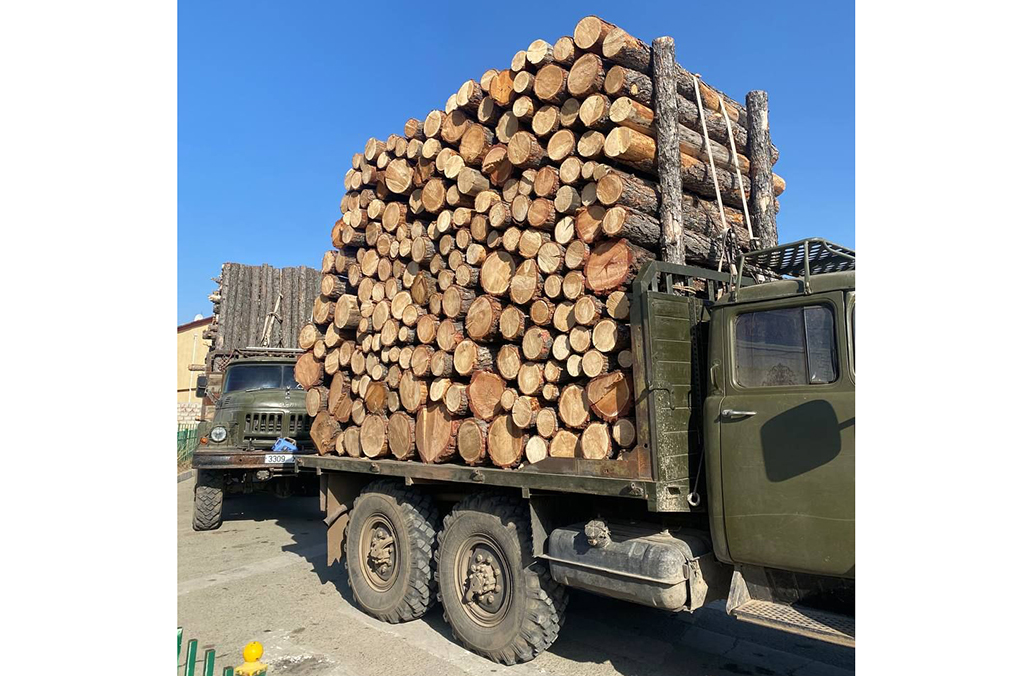 Through routine inspections and targeted controls, dozens of timber transporters were examined throughout Mongolia as part of Thunder 2022 global operations.
/

Although operational results are still being reported, Operation Thunder 2022 has so far seen almost 2,200 seizures and the identification of 934 suspects, triggering a series of worldwide arrests and investigations linked to illegal trading, processing, exporting and importing of protected wildlife and forestry products.

In addition to the identification of 141 companies suspected of engaging in illegal sales, total worldwide seizures of protected animals and plants so far include:

With seizures reported in units, or total kg, according to national police practices, results also include:

In Southern Africa, Namibian authorities intercepted large amounts of timber before they were smuggled into the region, with Angola arresting a citizen of the Asian region attempting to travel to Asia with rhino horns and ivory ornaments, and Malawi authorities seizing elephant tusks at the home of a man with Asian citizenship.

In Asia, Thailand reported several seizures of tortoises from East Africa and hundreds of live reptiles from Europe, whilst Indonesia made two large seizures of timber bound for the Middle East and Asia. India seized some 1,200 reptiles (iguanas, pythons, monitor lizards and tortoises) declared as “ornamental fish’ and packed in cardboard boxes.

With Europe a growing destination region for protected wildlife, France intercepted reptiles from Central Africa hidden in luggage, Germany intercepted tiger skin amulets in a parcel from Asia and the UK seized several ivory pieces after investigating a man selling wildlife on an e-commerce platform.

Illustrating the commitment of the American continent to protecting its natural heritage, Costa Rica arrested an individual in possession of hundreds of protected wildlife species and Peru issued an INTERPOL Red Notice against a timber trafficker. Parrots, iguana eggs, coral, crocodile leather products, caviar and shark meat were seized in several US international airports.

Several countries reported seizures of garments and accessories made of reptile skins. 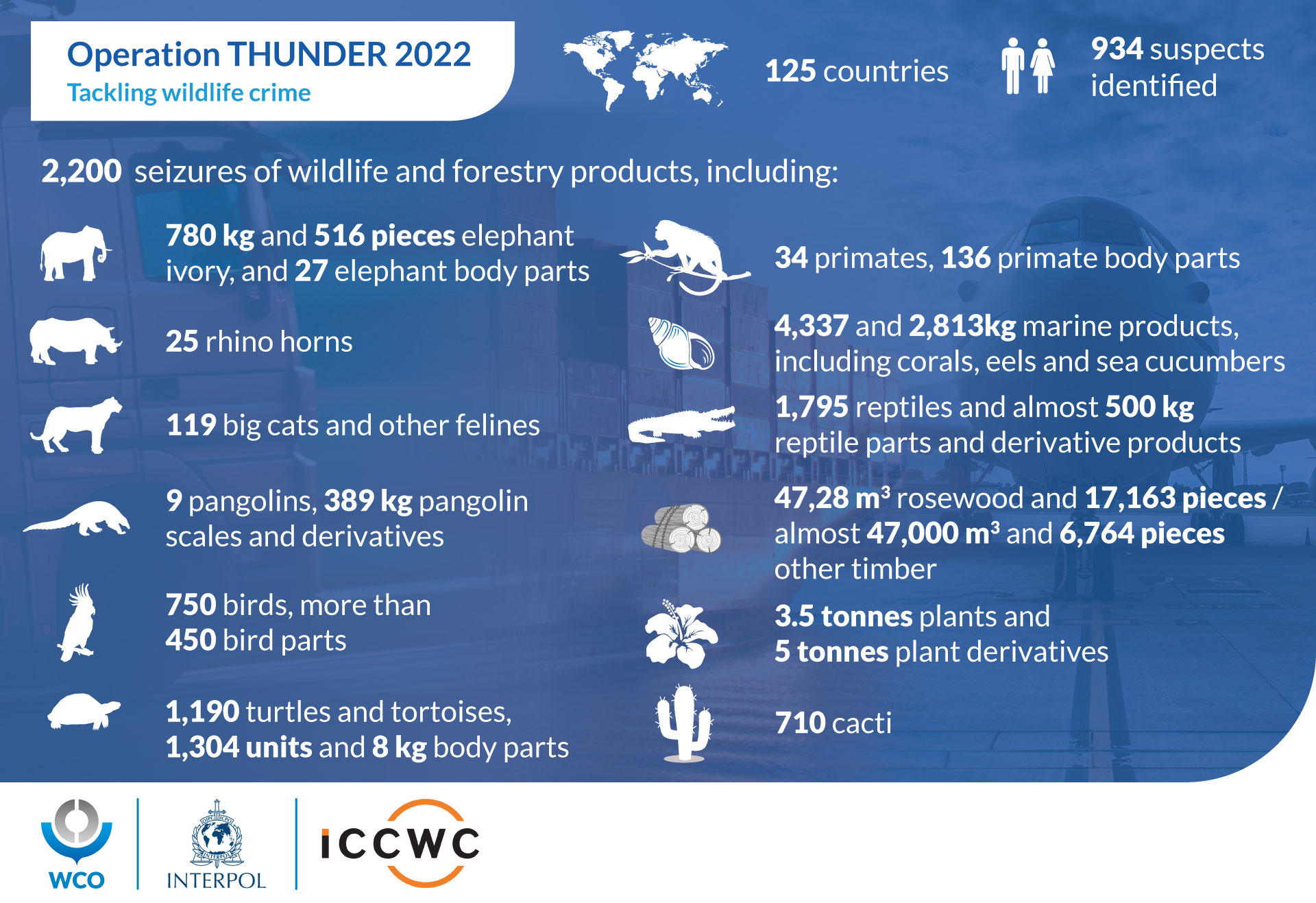 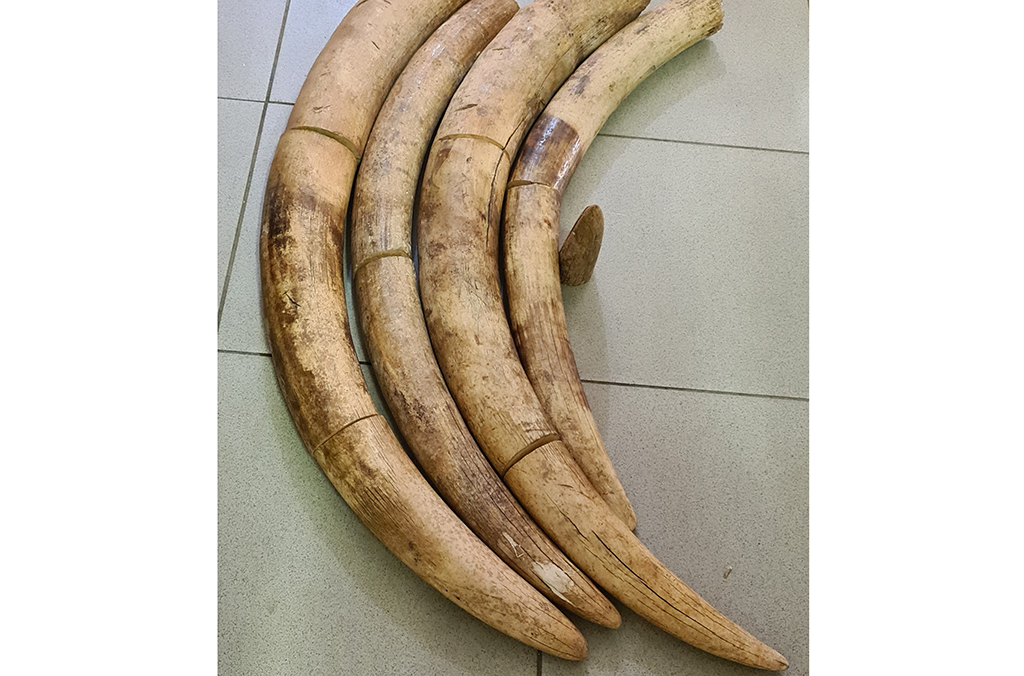 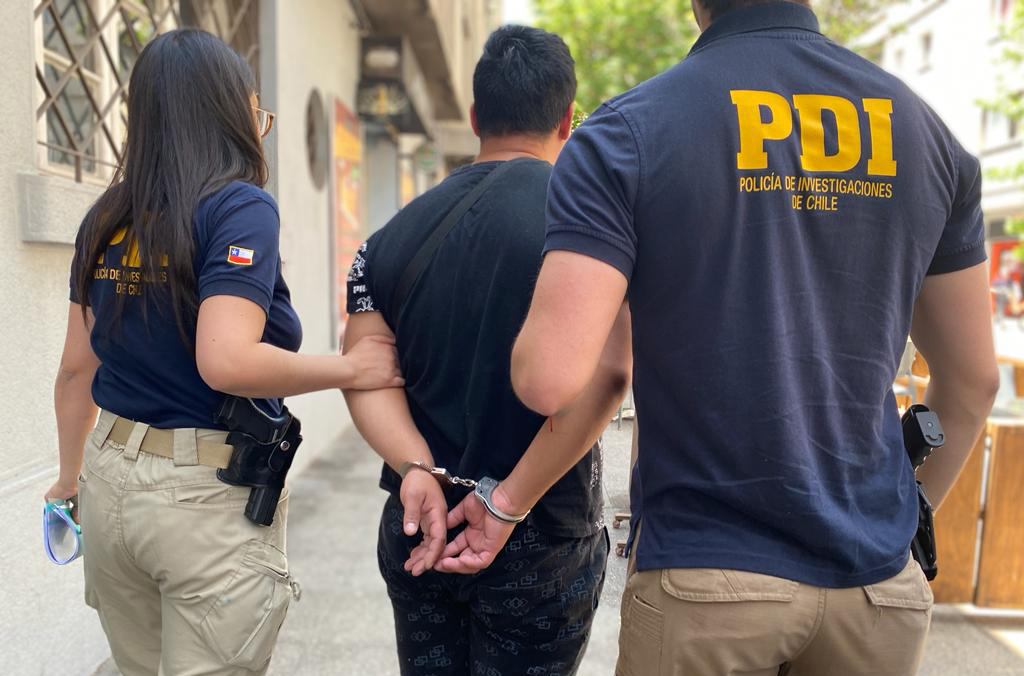 Operation Thunder 2022 saw some 2,200 seizures and the identification of 934 suspects, including this pet shop owner in Chile suspected of engaging in the illegal sale of protected species. 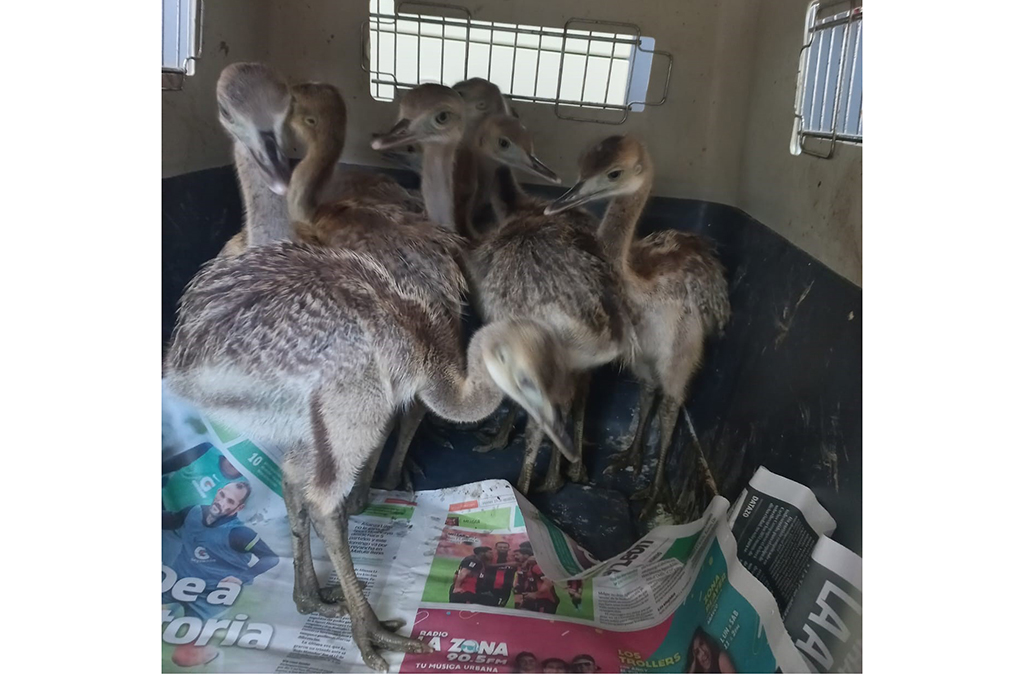 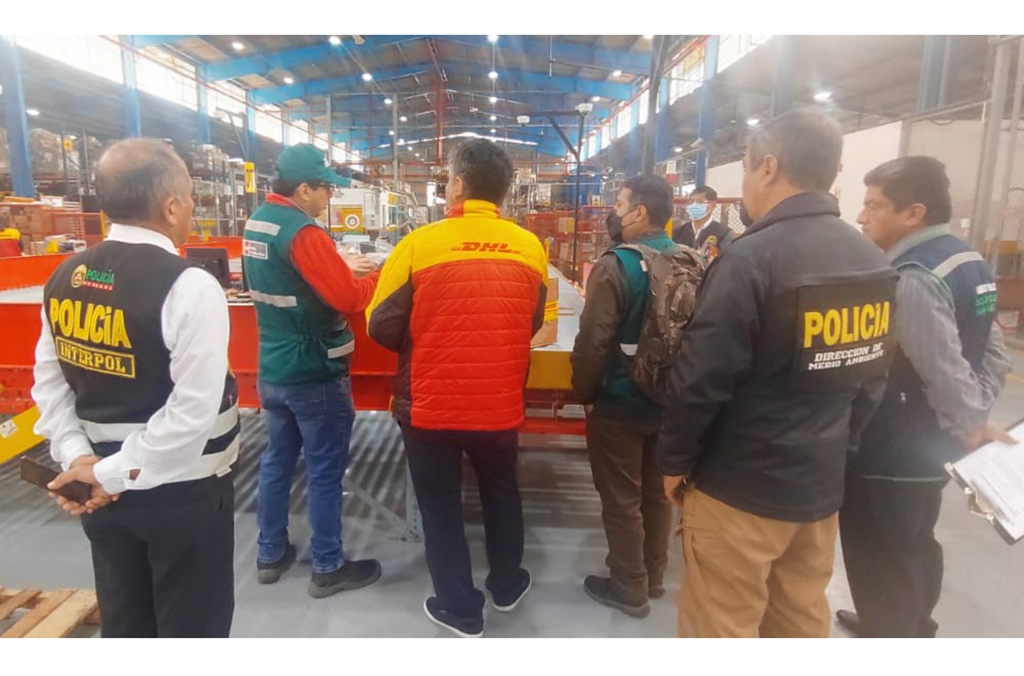 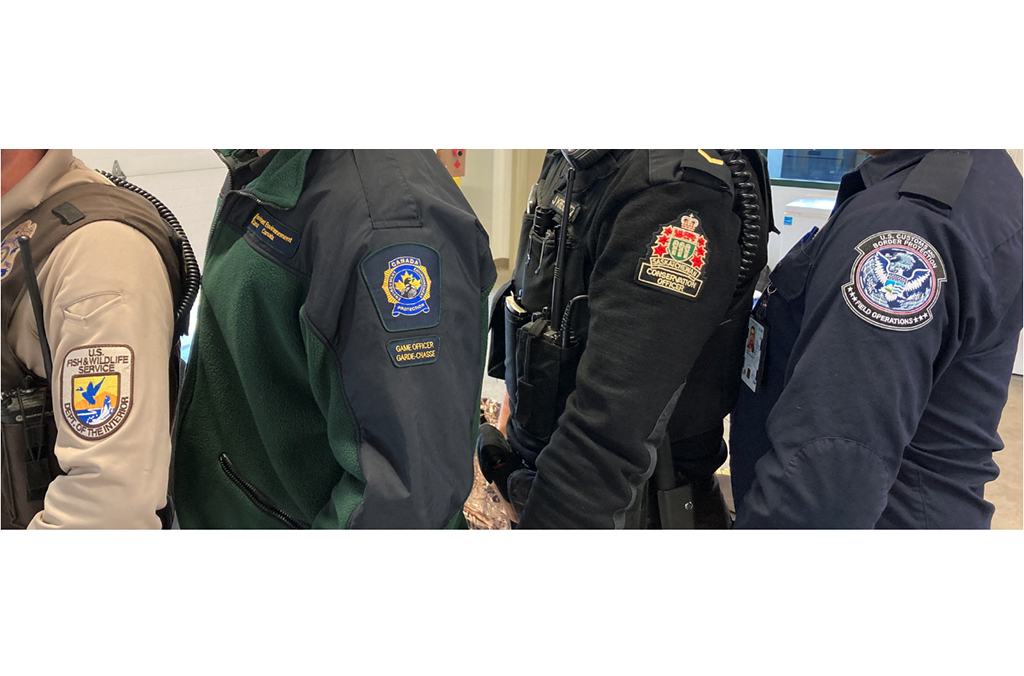 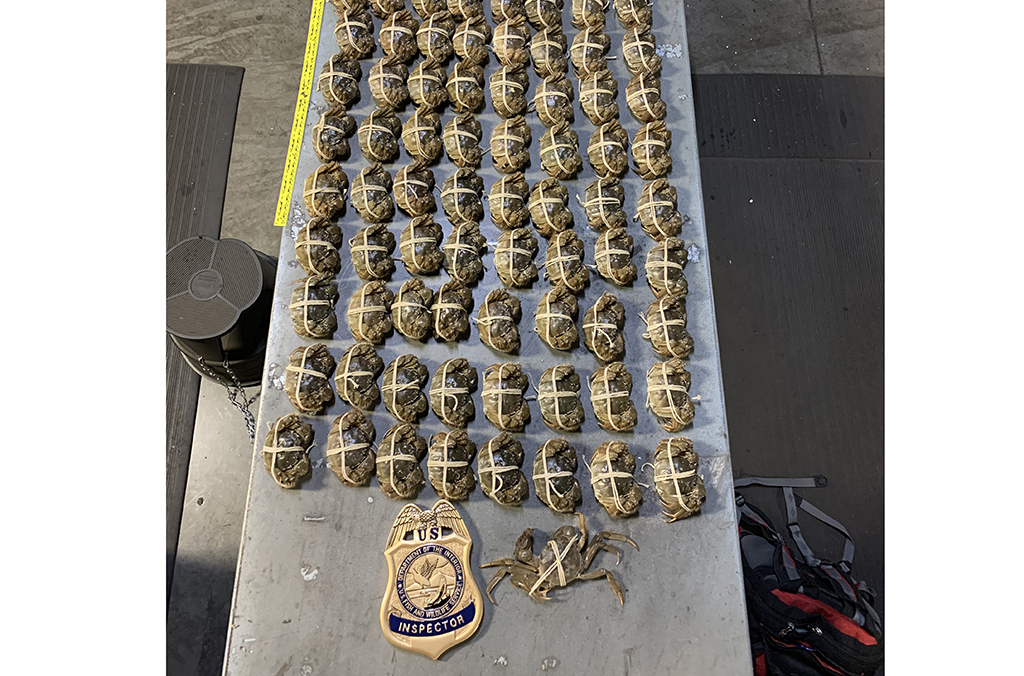 A sample of protected species intercepted in the US during Operation Thunder 2022. 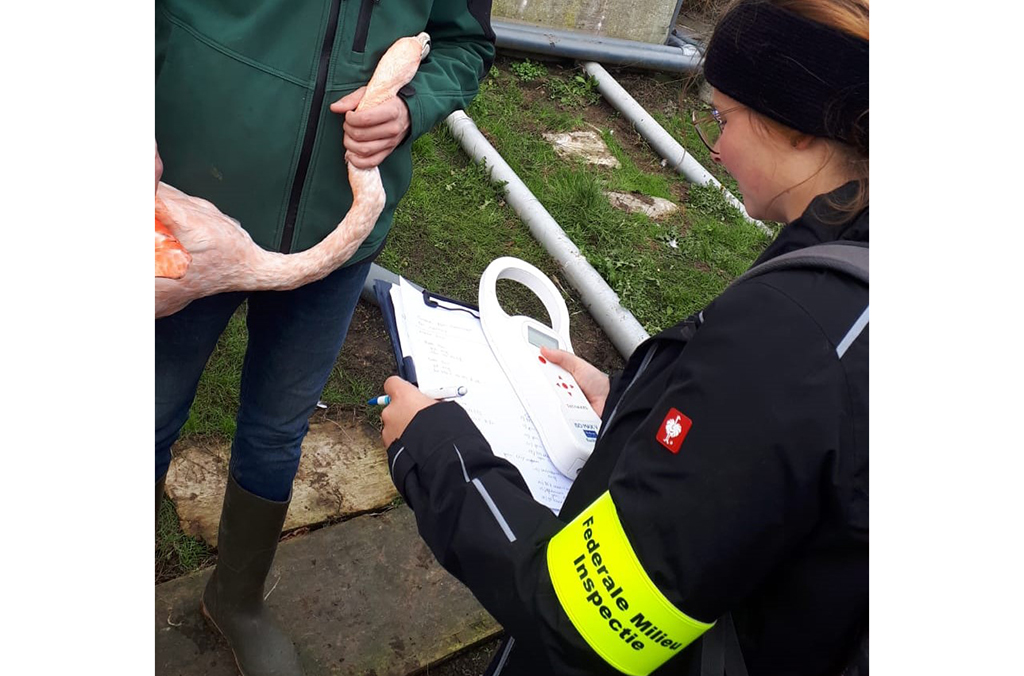 A CITES inspector in Belgium checks a flamingo ring identification as part of Operation Thunder 2022. 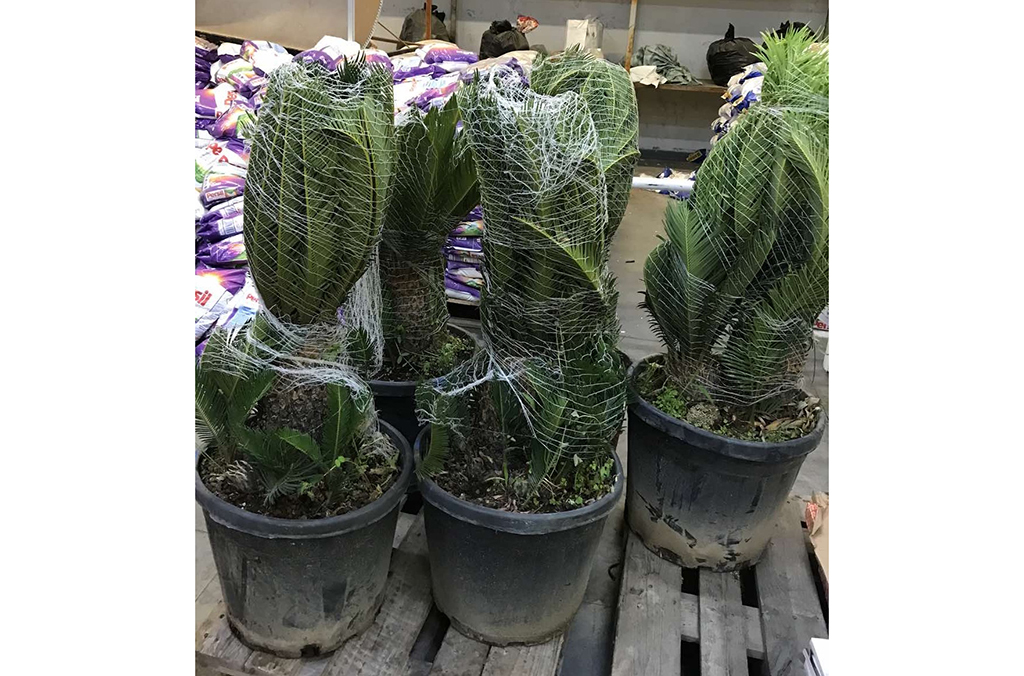 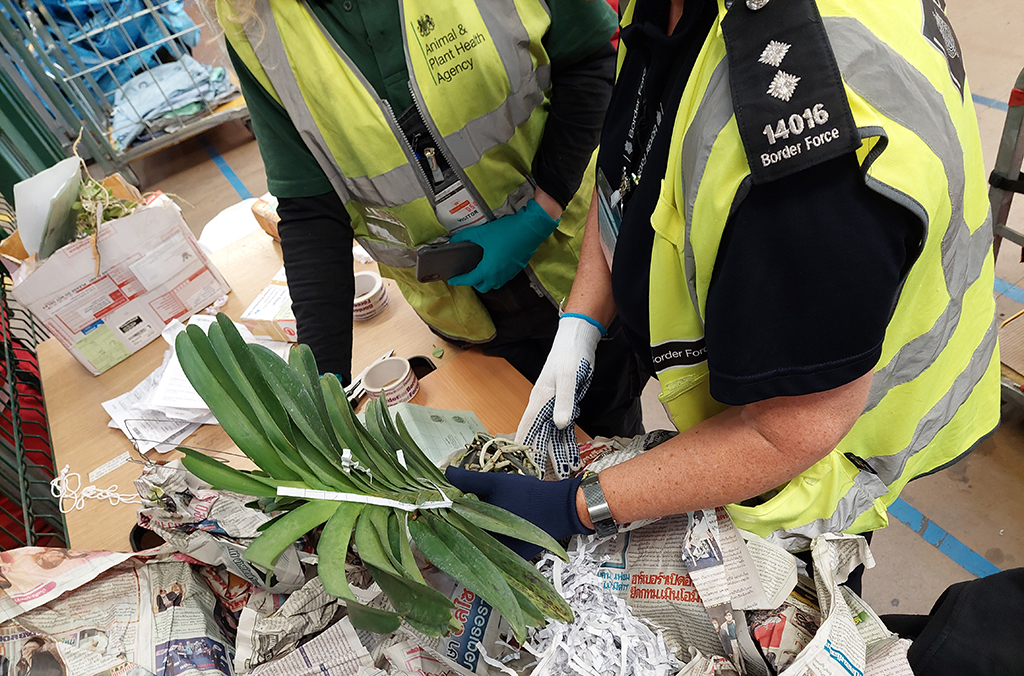 With Europe a growing destination region for protected wildlife and plants, UK agencies work together to intercept the illegal import and export of CITES-listed species. 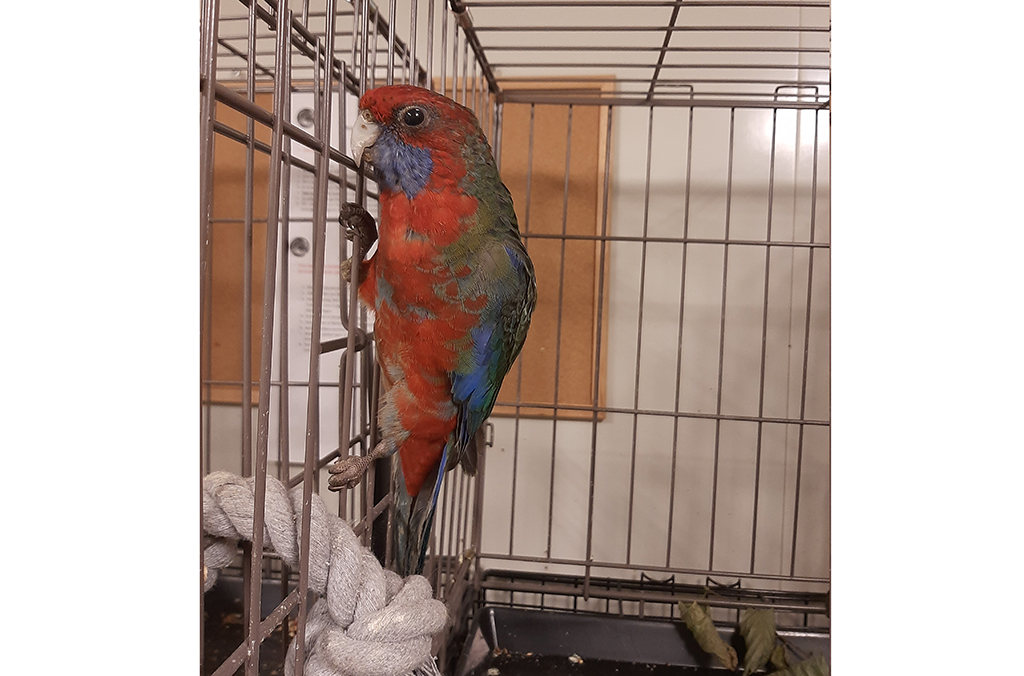 “Thunder operations are important to global security because timber and wildlife trafficking are not just conservation issues – officers lose their lives every year, livelihoods are destroyed, diseases are spread, governments weakened and entire economies destroyed. This is because the huge financial gains to be made attract serious organized crime and terrorist militants who grease the wheels of crime with heavy doses of corruption,” said INTERPOL Secretary General Jürgen Stock.

“Large scale cross-border operations like Operation Thunder 2022 are as much about putting criminals behind bars as about raising public awareness on what species or products people can or cannot buy, sell, or take from the wild.  Global multi-stakeholder cooperation is key to effectively tackling transnational criminal networks, from seizure to arrest to prosecution, as with the data collected, customs administrations can refine their risk management and strategies,” said WCO Secretary General Kunio Mikuriya.

Customs and police units shared wildlife and timber trafficking intelligence both ahead and during operations, enabling field officers to identify and target trafficking hotspots, with an emphasis on land and airport border points as well as wildlife parks.

Known criminals, particularly INTERPOL Red Notice fugitives, were identified ahead of operations, along with companies used to facilitate wildlife and timber crime.

Customs and police contribute to conservation efforts by gathering and delivering admissible evidence that supports investigations and prosecutions.

Coordinated jointly by the WCO and INTERPOL, with the backing of the CITES Secretariat and the International Consortium on Combating Wildlife Crime, Thunder Operations are funded by the European Commission’s Directorate General for International Partnerships, Norway’s International Climate and Forest  Initiative,  the UK’s Department for Environment, Food and Rural Affairs, and the US Agency for International Development.