In the last 30 years, elephant numbers in Kenya have doubled thanks to anti-poaching efforts.

Globally, the situation of many of the world’s most endangered species is dire. A quick glance at wildlife crime statistics shows numbers that are nothing short of shocking:

However, while pointing out the scale of the threat is essential, it is just as important to recognize the heroic work of law enforcement officers on the front lines of the fight against transnational wildlife crime.

Kenya is a good example.

“As a country, we depend in a big way […] on tourism. The tourism purely depends on the beauty of our environment,” says George Maingi Kinoti, Director of the Criminal Investigations Department of Kenya’s National Police Service.

“Wildlife crime is something which was not initially taken very […] importantly […] as one of the major crimes. Now, we are realizing the hospitals, the roads, the community’s development actually are actually proceeds from these animals,” Mr Kinoti explains.

Kenya is also of strategic importance in the fight against wildlife crime due to its port in Mombasa, which sees up to 5,000 containers shipped through every day.

“The cartels, the smugglers, the criminal networks, will want […] to sneak in an illicit or illegal shipment, hoping that because there’s so many containers, we may overlook […] and say ‘we can only inspect so much,” says Swaleh Faraj, a senior official at the Kenya Revenue Authority.

“We have put a lot of infrastructure to address that, to make it less attractive. This would not be a success without the support of INTERPOL and the global network they have to share and exchange information.”

The collaboration of Kenyan law enforcement has already shown encouraging results. Over the last 30 years, elephant numbers in Kenya have doubled. A crackdown on poaching and wildlife trafficking has led to an increase in arrests.

Successfully fighting against wildlife traffickers is not without its risks. In Nairobi National Park, a monument bears the names of all those who have lost their lives in the line of duty protecting Kenya’s wildlife.

“Every year, [the list of names] keeps growing,” remarks Celine Mwangangi of the Kenya Wildlife Service. “We’re always reviewing how we operate so that we beat the criminals, [so that] we get them before they get us. [This] is always our motto.”

For Gideon Kimilu, Head of INTERPOL’s Regional Bureau in Nairobi, law enforcement has a central role in combating wildlife crime yet protecting the environment is everyone’s duty.

“In Kenya, we normally say our environment is our inheritance,” Mr Kimilu says. “If you don’t conserve your environment, what will you hand over to your children?” 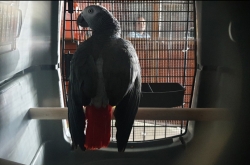