MANILA, Philippines - An INTERPOL-coordinated operation targeting organized crime networks behind ‘sextortion’ cases around the world has resulted in the arrest of 58 individuals, including three men linked to the group which harassed Scottish teenager Daniel Perry.

Perry, a 17-year-old victim of an online blackmail attempt, died after jumping off the Forth Road Bridge near Edinburgh in July last year.

In the first operation of its kind, information shared between the INTERPOL Digital Crime Centre (IDCC), Hong Kong Police Force, Singapore Police Force and the Philippines National Police (PNP) Anti-Cybercrime Group led to the identification of between 190 and 195 individuals working for organized crime groups operating out of the Philippines.

Close cooperation with Police Scotland, the US Immigration and Customs Enforcement (ICE) Homeland Security Investigations (HSI), the Philippines Department of Justice Office of Cybercrime and the UK's National Crime Agency CEOP Command, resulted in the identification of sextortion victims in Indonesia, the Philippines, Singapore, the United Kingdom and the United States. Potential victims were also traced to Australia, Korea and Malaysia in addition to the hundreds of individuals in Hong Kong and Singapore already reported as victims.

Codenamed Operation Strikeback, a series of raids was carried out by the PNP in Bicol, Bulacan, Laguna and Taguig City on 30 April and 1 May resulting in the seizure of 250 pieces of electronic evidence including mobile phones, laptops, network and storage devices as well as live ammunition. 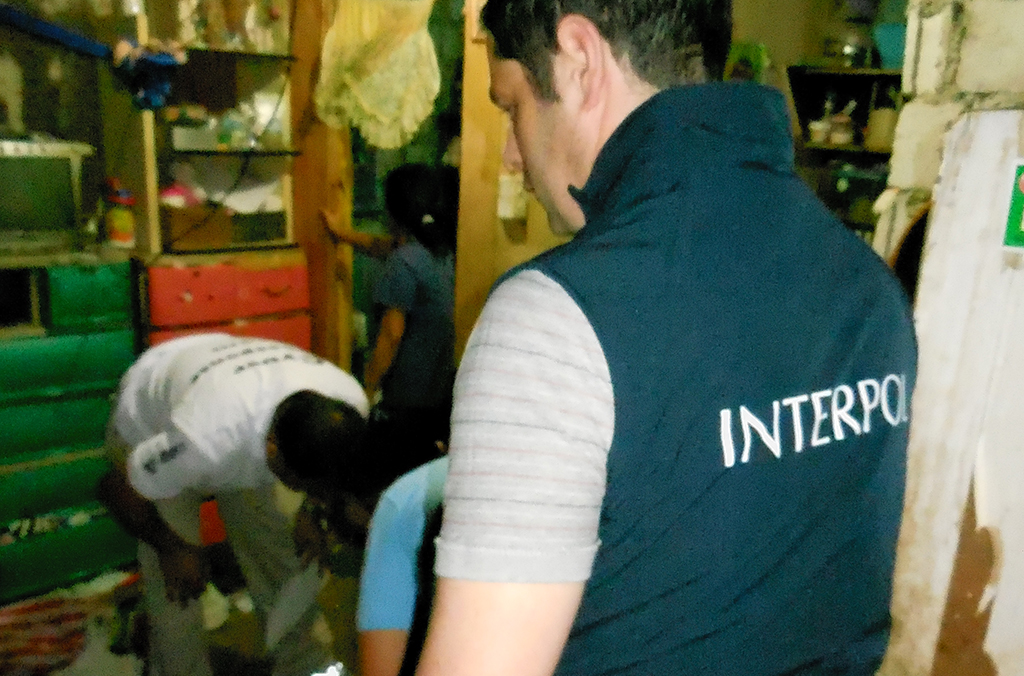 The operation stemmed from an INTERPOL meeting in November 2013 that highlighted the growing number of sextortion victims around the world. Subsequent intelligence sharing linked victims and cybercrime cases and led to a second meeting in March 2014, where representatives from payment and judicial systems also participated. 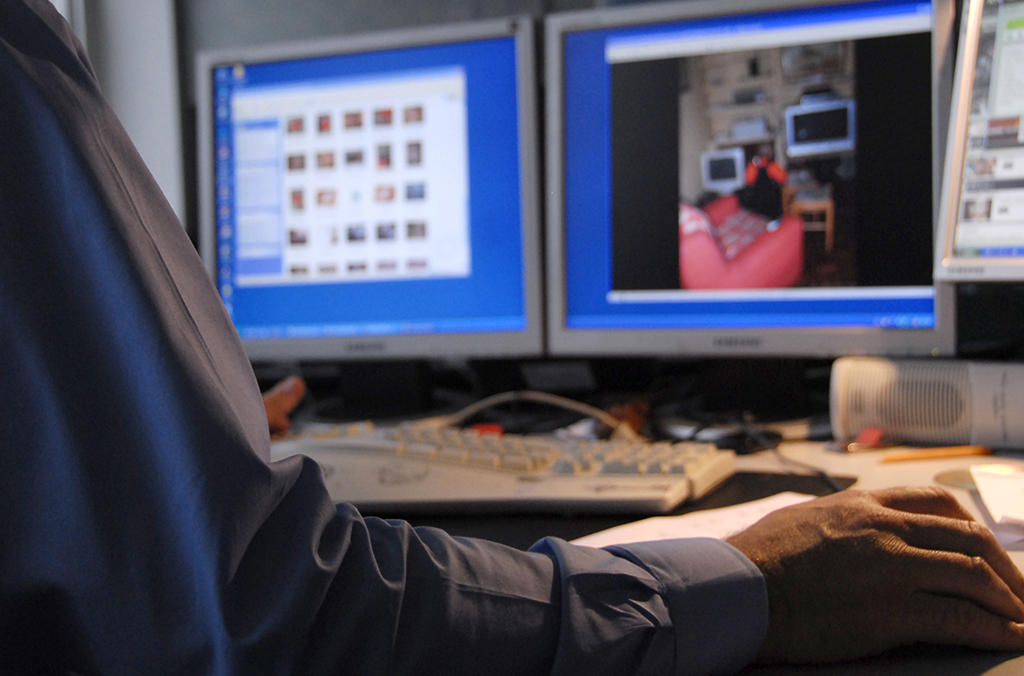 “Cybercrime recognizes no national boundaries, but the international cooperation by different agencies in this investigation should send a message to those who commit cybercrime – there is nowhere to hide,” - UK Ambassador to the Philippines, Asif Ahmad. 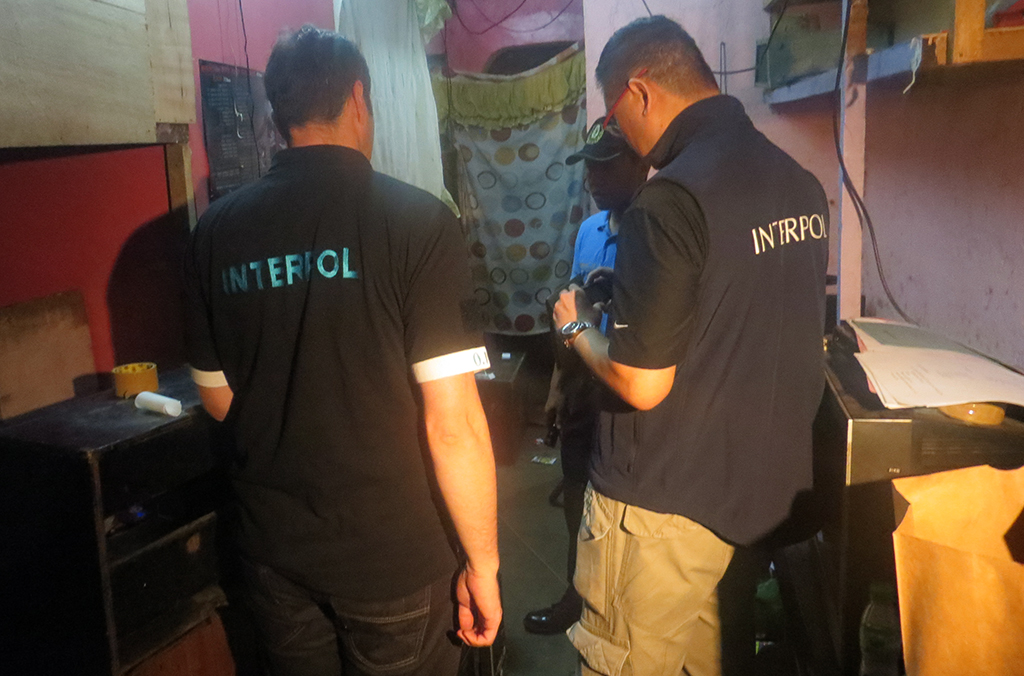 “These sextortion networks run with just one goal in mind: to make money regardless of the terrible emotional damage they inflict on their victims,” said Sanjay Virmani, Director of INTERPOL’s Digital Crime Centre. 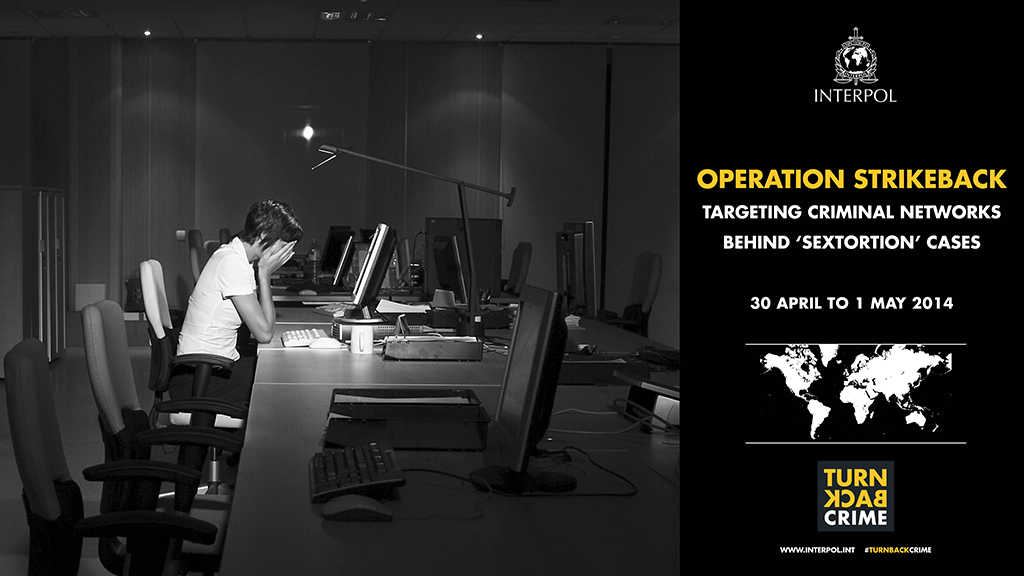 Operation Strikeback targeted the organized networks behind ‘sextortion’ cases, where criminals threaten to share explicit images of victims unless they pay money. 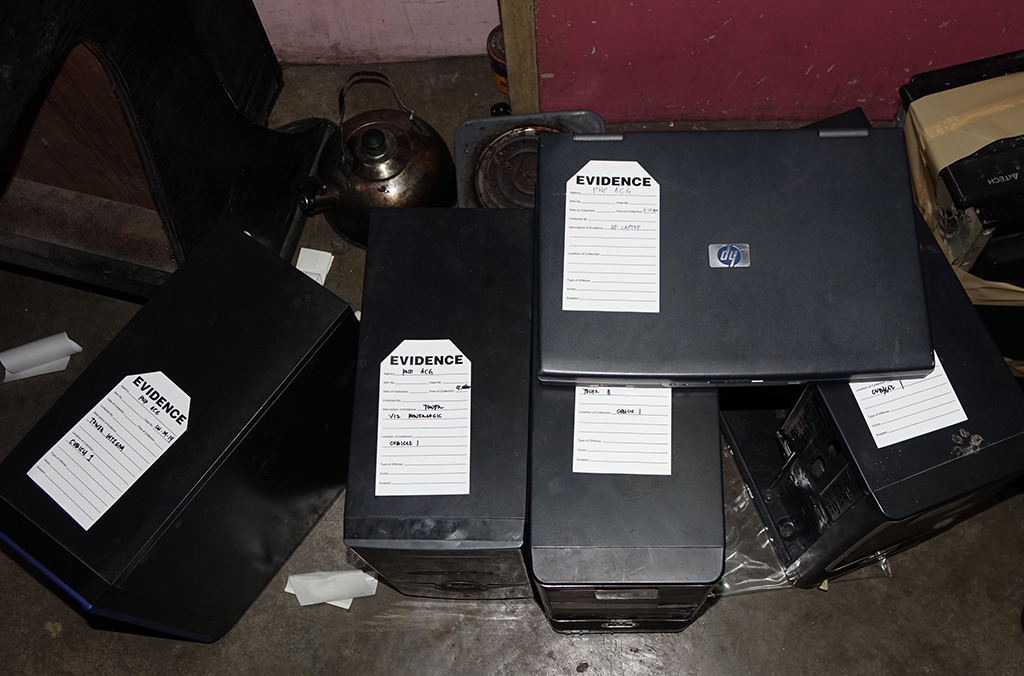 The digital evidence will be analyzed by forensic experts in the Philippine National Police and the countries involved in the operation, to identify any additional victims and for follow-up investigations. 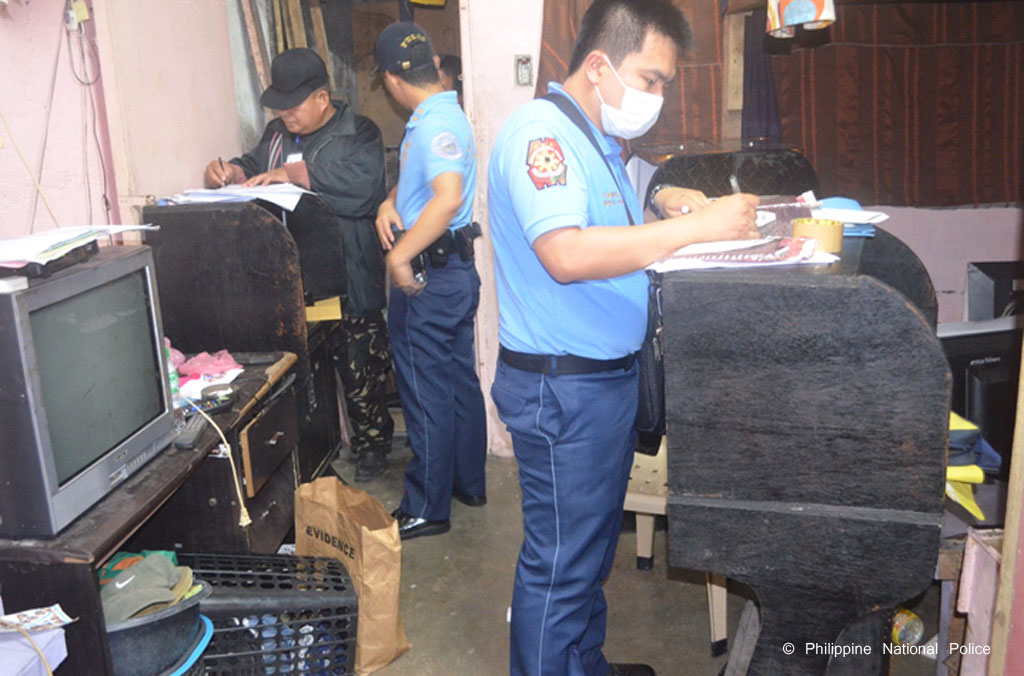 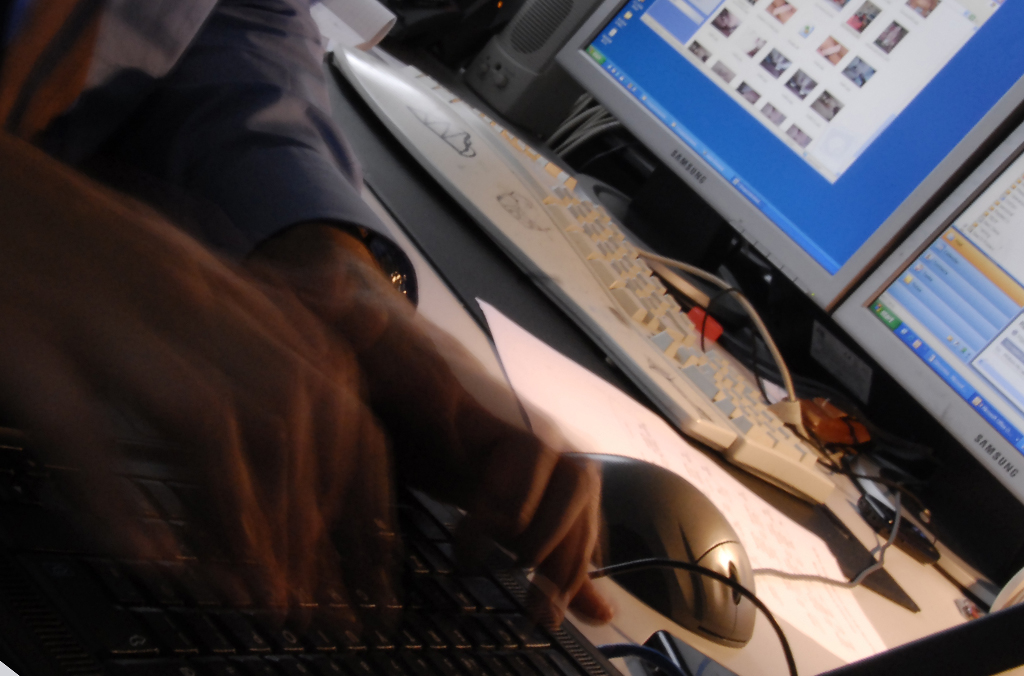 "The success of this operation is evidence that the INTERPOL Global Complex for Innovation will increase opportunities for information sharing and help close the net on cyber criminals around the world," - Noboru Nakatani, Executive Director of the IGCI. 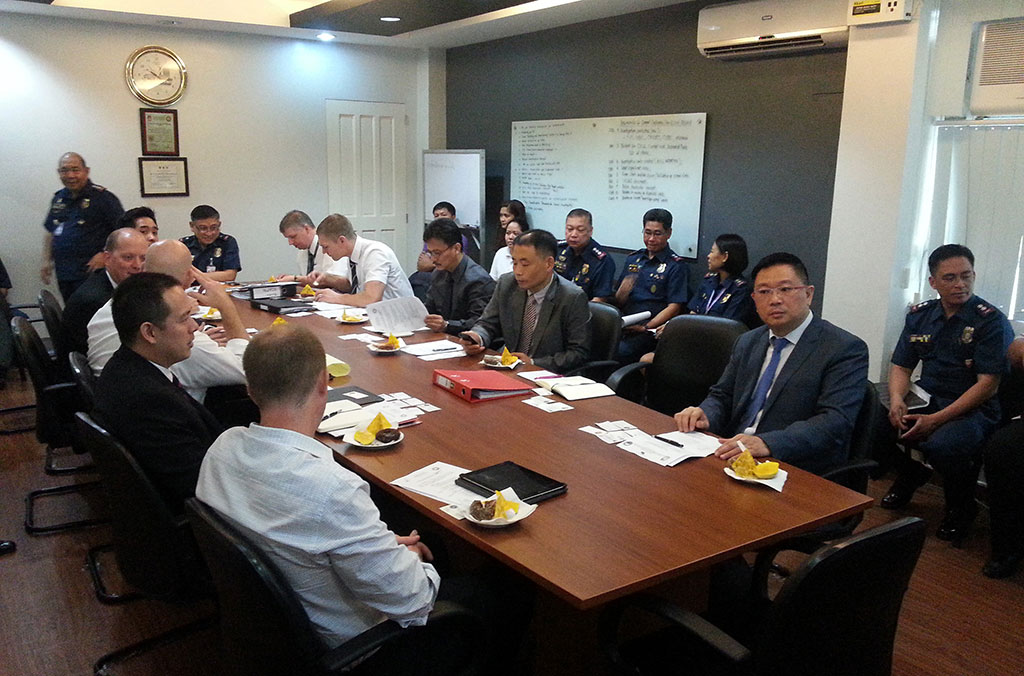 The raids took part in the Philippines, but the operation involved officials from the UK, Hong Kong, Singapore, the United States and INTERPOL. 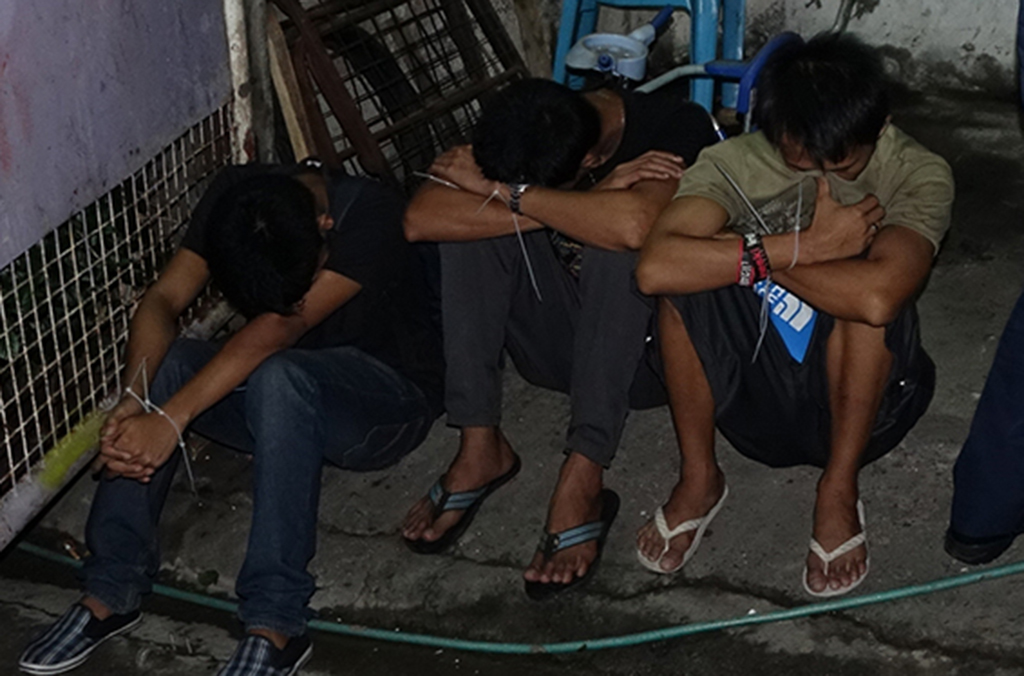 Cyber-blackmail ‘agents’ are trained and offered incentives for reaching their financial targets, with blackmail demands ranging between USD 500 and USD 15,000. 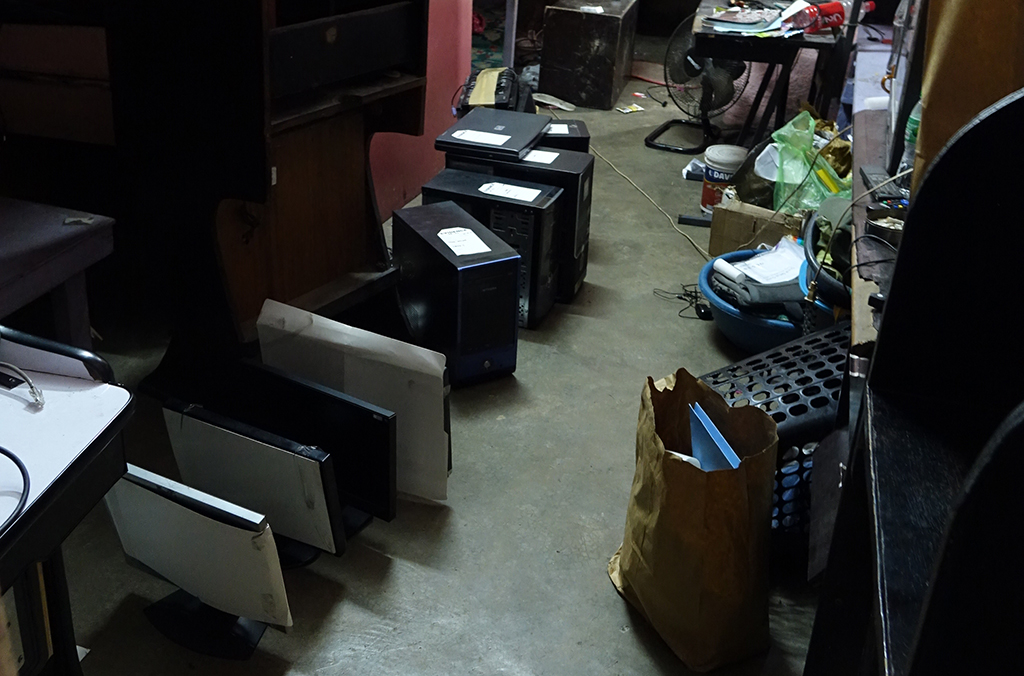 Police confiscated 250 items of electronic evidence during the raids. 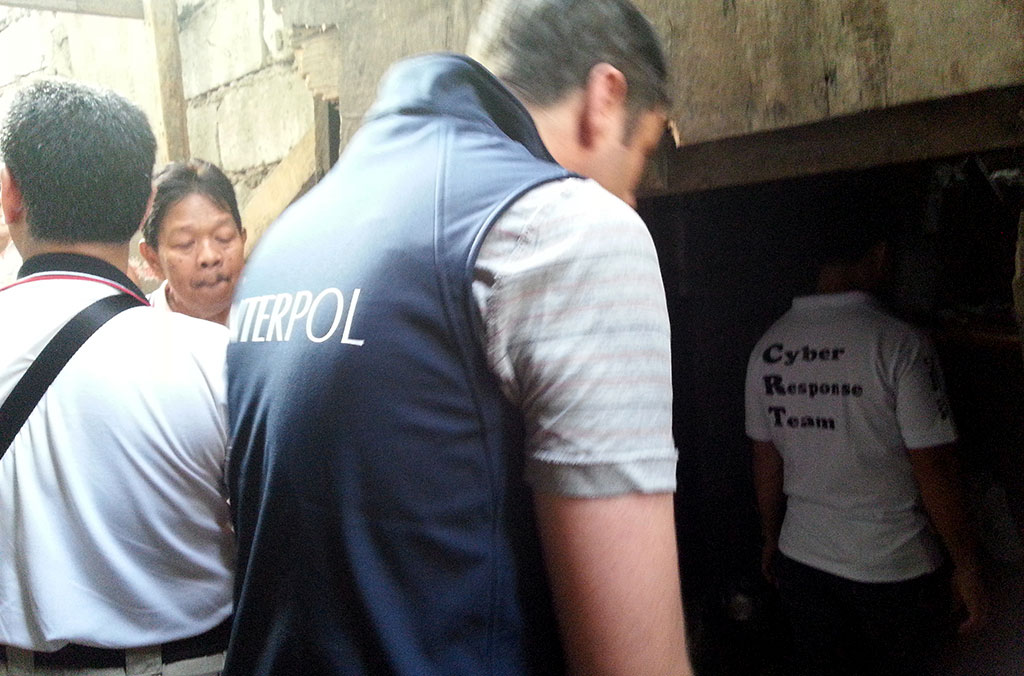 The entrance to one of the ‘offices’ used by the criminal networks to threaten and extort victims. 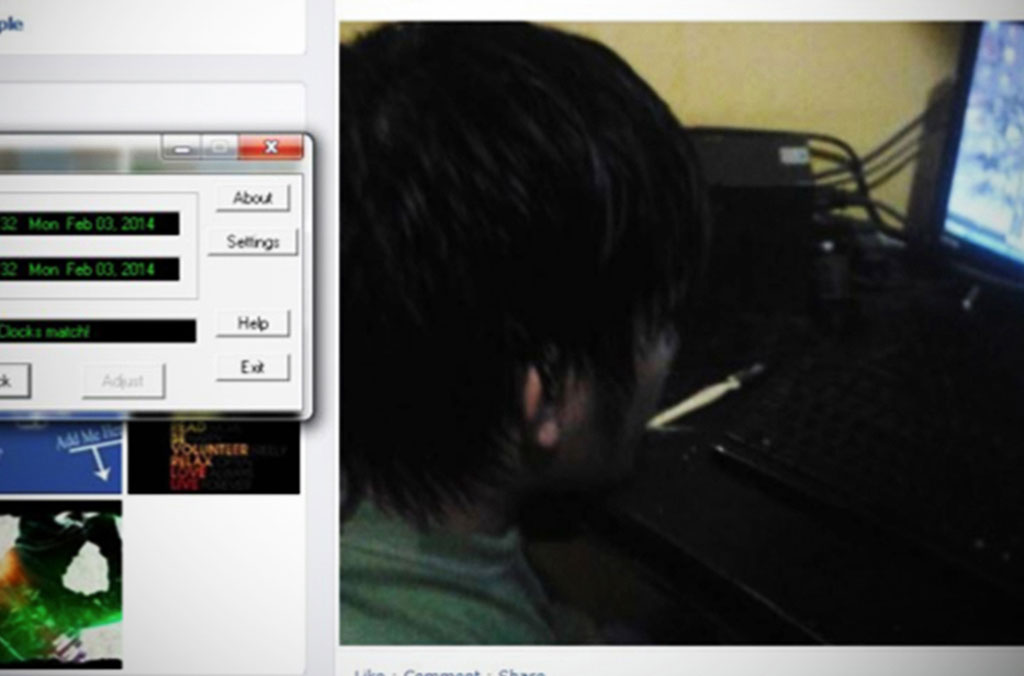 Sextortion is often defined as sexual blackmail in which sexual information or images are used to extort sexual favours and/or money from the victim. Social media and text messages are often the source of the sexual material, and the threatened means of sharing it with others. 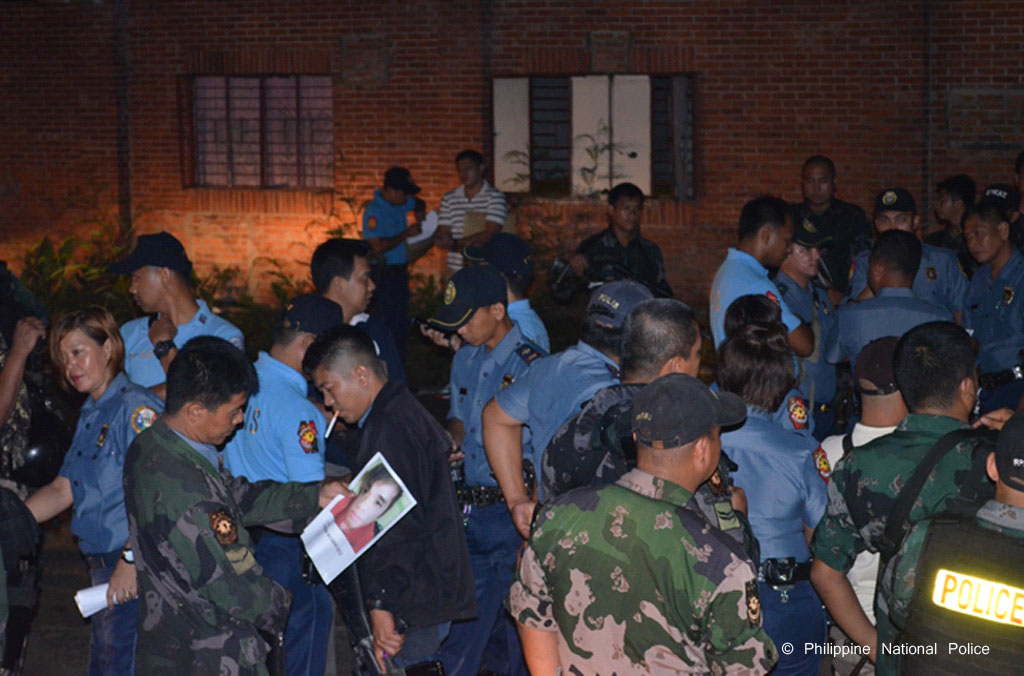 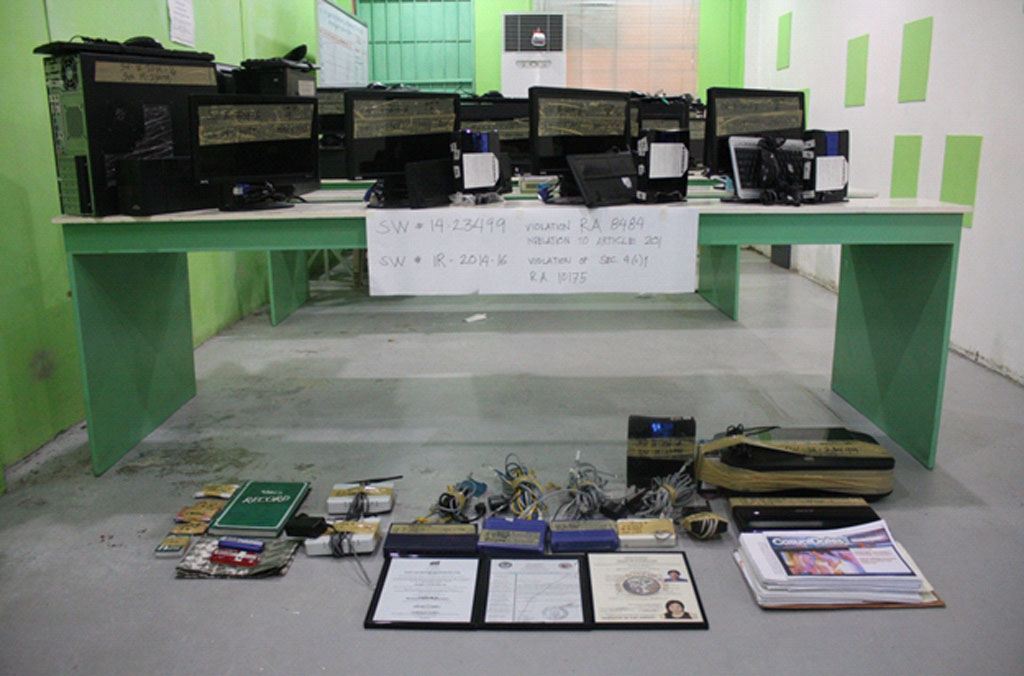 Operating on an almost industrial scale from call centre-style offices, such cyber-blackmail agents are provided with training and offered bonus incentives such as holidays, cash or mobile phones for reaching their financial targets.

Sextortion is often defined as sexual blackmail in which sexual information or images are used to extort sexual favours and/or money from the victim, with blackmail demands ranging between USD 500 and USD 15,000. In addition to the Asia-based networks, there is also evidence of individuals and groups operating out of Africa targeting victims throughout Europe.

“The scale of these sextortion networks is massive, and run with just one goal in mind: to make money regardless of the terrible emotional damage they inflict on their victims,” said Sanjay Virmani, Director of the IDCC.

“The success of Operation Strikeback is down to the cooperation between the law enforcement agencies in the involved countries, particularly the Philippine National Police, and also demonstrates INTERPOL’s key role in coordinating and supporting transnational investigations,” said Noboru Nakatani, Executive Director of the INTERPOL Global Complex for Innovation (IGCI) in Singapore which houses the IDCC.

“It is also a clear indicator that when the IGCI officially opens its doors later this year, this increased opportunity for information-sharing will lead to further successes and help close the net on cybercriminals around the world,” concluded Mr Nakatani.

Chief of Philippine National Police, Alan la Madrid Purisima said they would continue to identify and arrest anyone involved in sextortion.

"These arrests show our continued determination to bring these criminals to justice and our willingness to work with law enforcement around the world in order to do this," said Chief Purisima.

"This successful operation stemmed from an INTERPOL meeting and we look forward to our continued collaboration to show that there can be no hiding place."

Police Scotland’s Assistant Chief Constable Malcolm Graham, Major Crime and Public Protection, said: “A young Scottish teenager lost his life as a result of this online activity. The impact on his family, friends and wider community cannot be imagined.

“Our message is clear: Our focus is on keeping people safe and there is no hiding place – anywhere in the world – if you are a criminal and you undertake this type of activity, which preys on those who might be the most vulnerable and susceptible to coercion and blackmail.”

“Combating the sexual exploitation of children is a global effort,” said Homeland Security Investigations (HSI) Office of International Affairs Assistant Director John G. Connolly. “HSI works closely with the law enforcement community around the world on joint operations and provides training and expertise to many foreign countries. Our mission takes us across oceans to protect children wherever they may be and ensure that criminals are brought to justice.”

UK Ambassador to the Philippines Asif Ahmad said: “Cybercrime comes in many shapes and forms. It recognizes no national boundaries and can affect every one of us. The international cooperation displayed by the different law enforcement agencies across the world in this investigation should send a message to those who commit cybercrime – there is nowhere to hide.”

Material seized during Operation Strikeback will be analyzed by specialist officers from the involved countries in order to identify any additional victims and for follow-up investigations.

Whilst Operation Strikeback targeted sextortion networks, this is just one type of online sexual abuse which INTERPOL is working to combat in coordination with law enforcement and specialist agencies.

Other areas include the sexual blackmail of children by paedophiles, where the offenders already have a sexual interest in children. Through social networks, they assume the identity of a child to befriend and gain the trust of victims, who are then encouraged to share naked images depicting sexual activity. The blackmailer then threatens to share these images in order to coerce the child to make additional, and usually more explicit images.

The sexual abuse of children ‘to order’ live on webcam is another type of online child sexual abuse. Criminal gangs offer street children or children from their own family for sexual abuse by paedophiles in other countries in exchange for money.

The offenders can be located anywhere in the world and pay the criminal gangs which are controlling access to the children. The foreign offender can direct the sexual abuse, either towards a child or between children and pay for it to be streamed live.

INTERPOL’s Trafficking in Human Beings and Child Exploitation unit manages the International Child Sexual Exploitation (ICSE) database which contains nearly 2,500 identified victims of sexual exploitation from 41 countries. As well as providing vital assistance in locating offenders, the ICSE database is also an important tool in avoiding duplication of effort by police trying to identify victims who have already been rescued.

One of the key aims of INTERPOL’s upcoming Turn Back Crime global awareness campaign is to educate society about the ways in which organized crime infiltrates our daily lives, and to assist the public in protecting themselves.