CARTAGENA DE INDIAS, Colombia – The 82nd session of the INTERPOL General Assembly closed today with strong foundations in place for the Organization’s future to better support all 190 member countries in tackling transnational crime and terrorism. 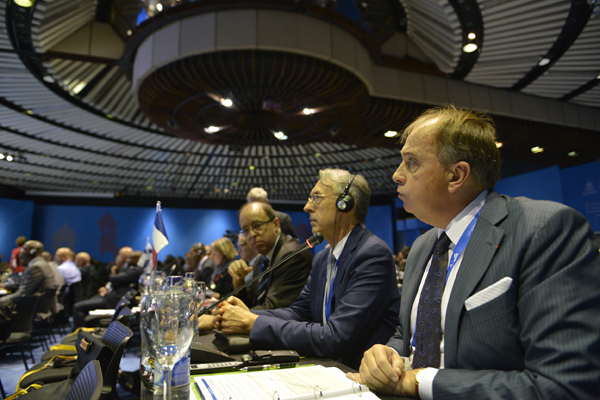 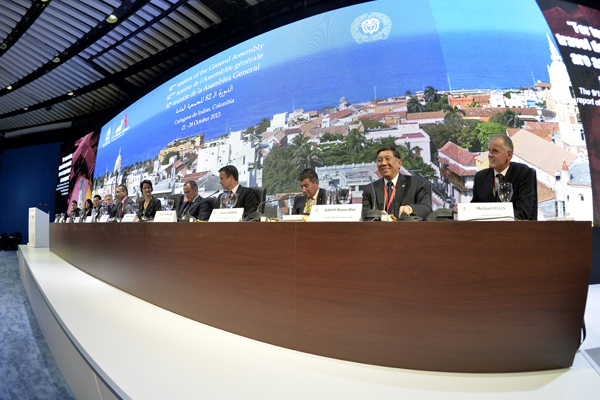 Among the topics discussed were illicit goods, counterfeiting and pharmaceutical crime. 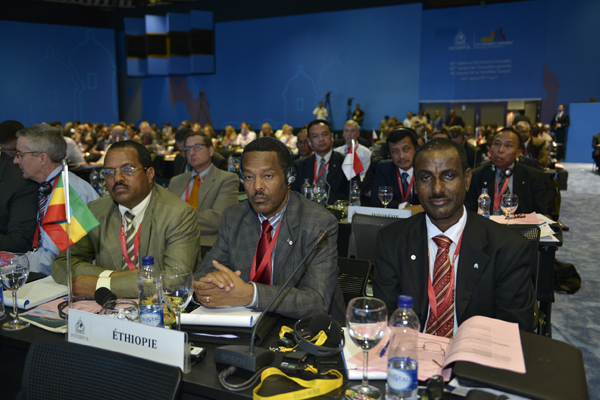 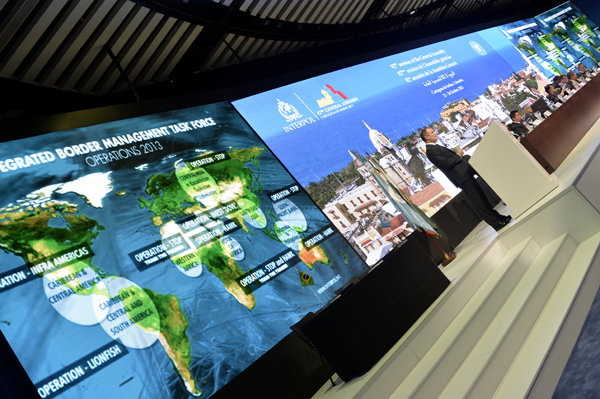 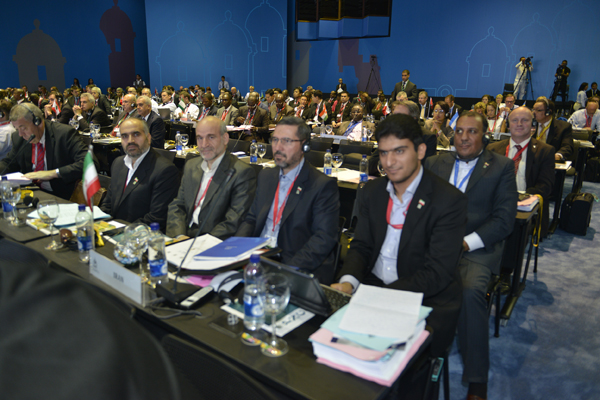 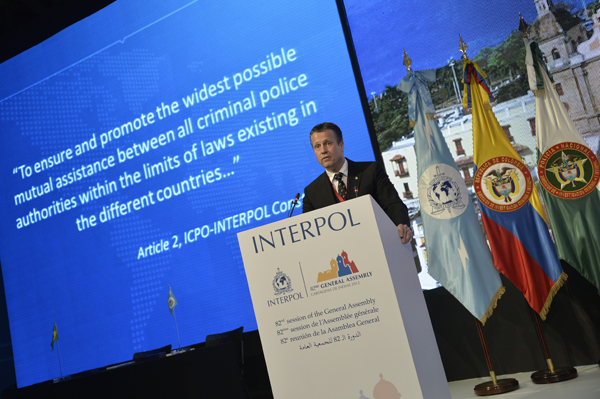 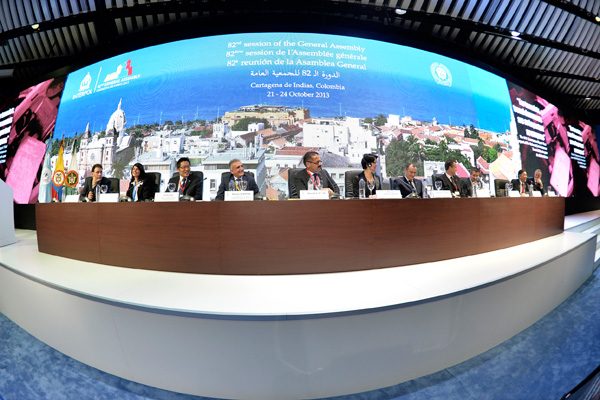 A number of Resolutions were passed, along with cooperation agreements with other organizations. 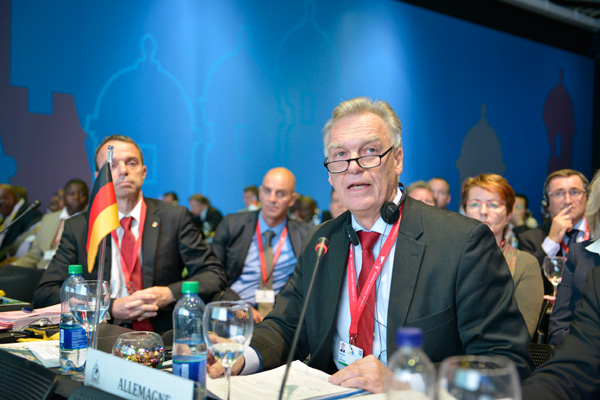 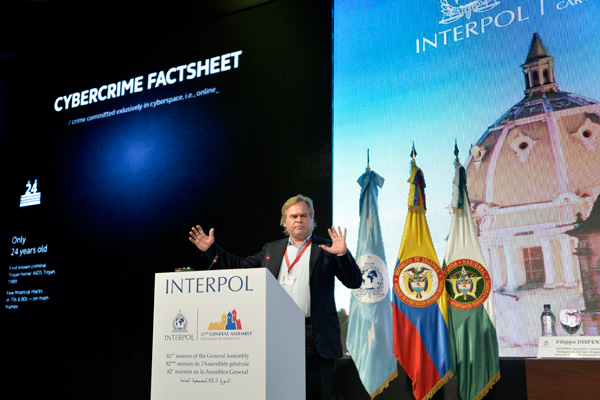 Eugene Kaspersky, CEO of Kasperky Lab, addresses delegates on the subject of international police and private companies in the age of cybercrime. 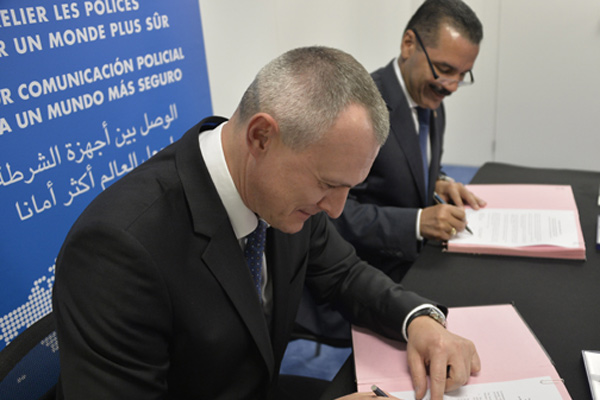 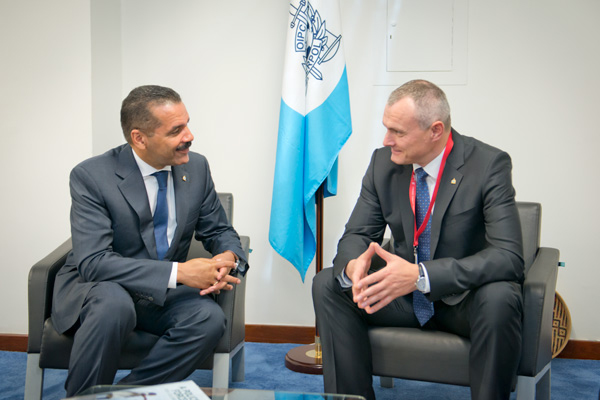 Minister Shunevich (right) and Mr Noble discuss how the INTERPOL team can detect potential threats of terrorism, hooliganism and serious crime, and secure Belarus’s borders during the Ice Hockey Championship. 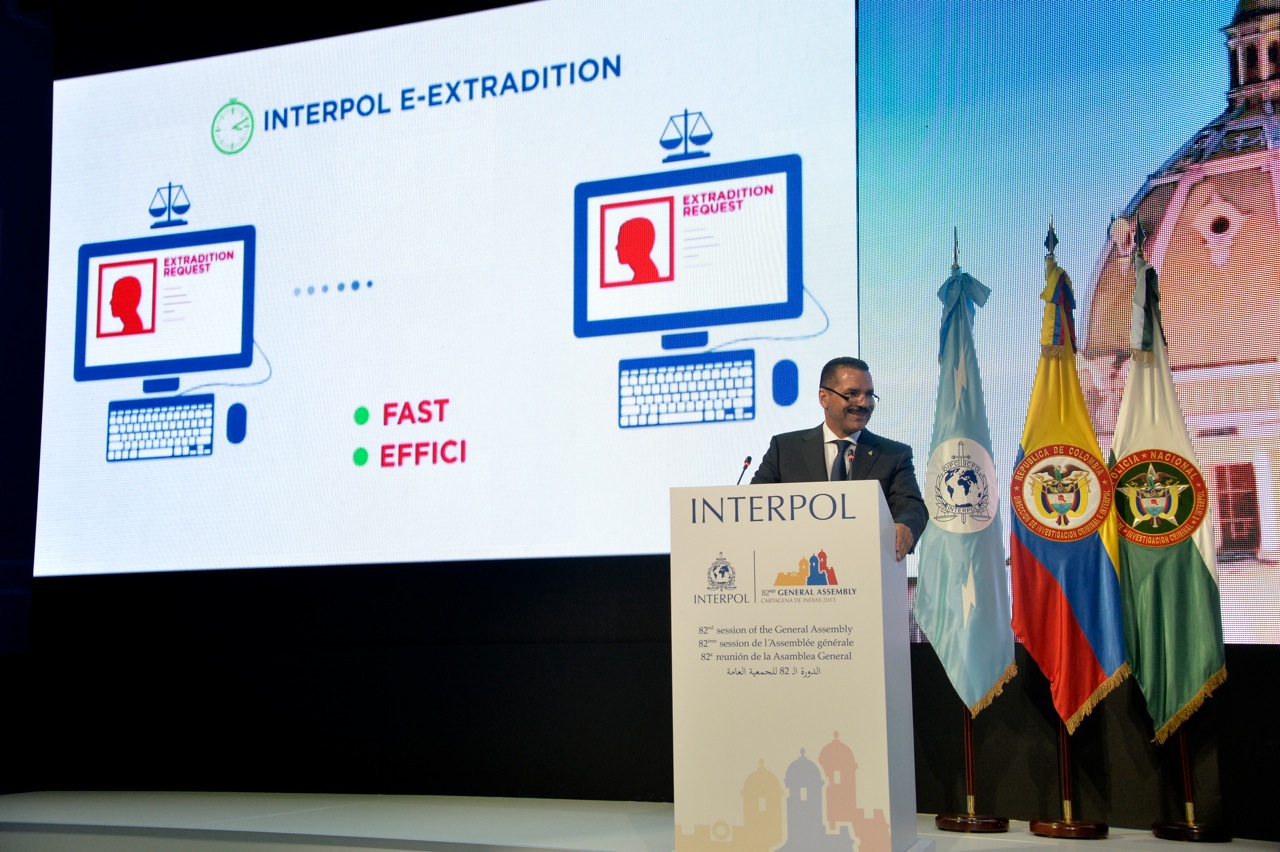 The General Assembly endorsed INTERPOL’s new e-extradition initiative which will significantly speed up and facilitate extradition requests through the Organization’s secure communications channels. 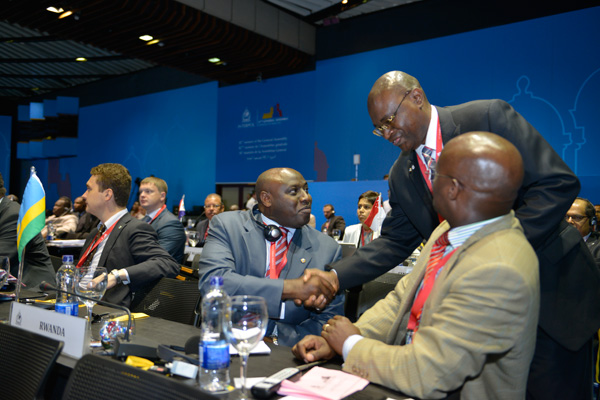 Rwanda was chosen as the host country for the 84th session of the INTERPOL General Assembly in 2015. 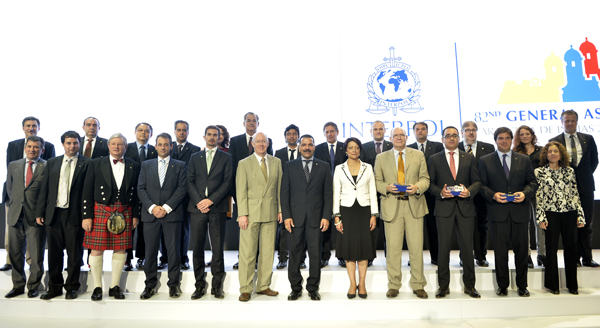 Every year, a technology exhibition allows private sector companies to showcase their latest innovations to the global police community. This year’s participants were recognized in a special ceremony. 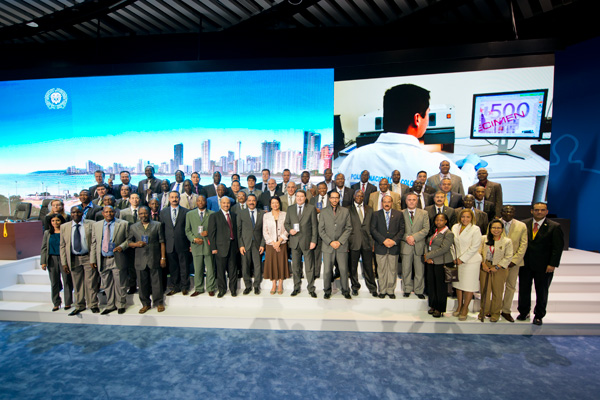 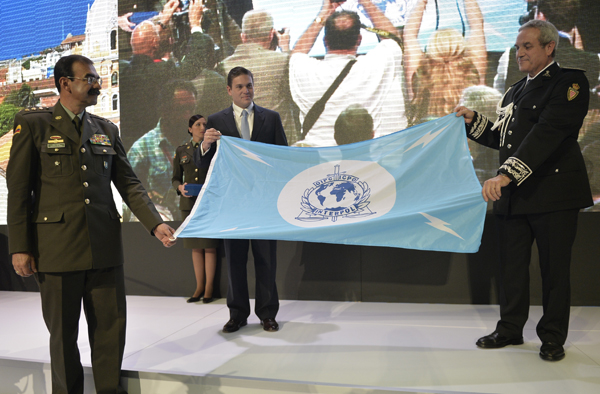 Colombia hands over the INTERPOL flag to Monaco, the hosts of next year’s General Assembly meeting. 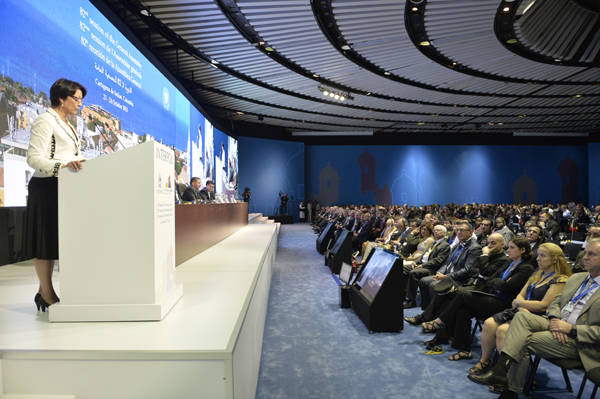 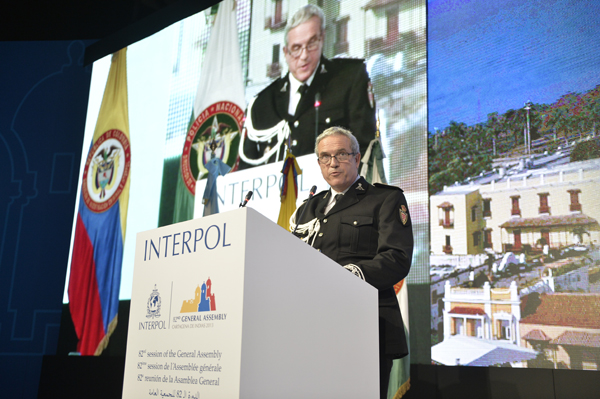 Monaco will host the 83rd General Assembly exactly 100 years after it held the first International Criminal Police Congress in 1914, where the idea of INTERPOL was born. 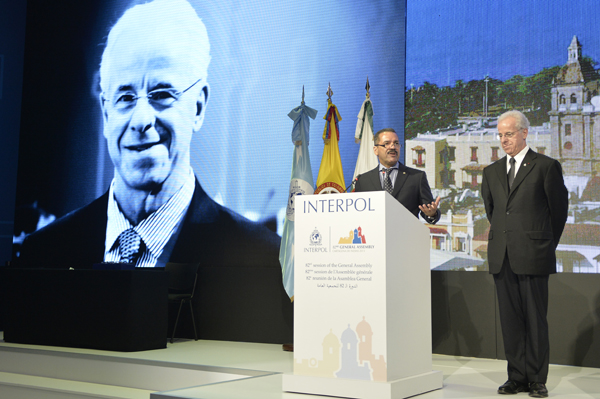 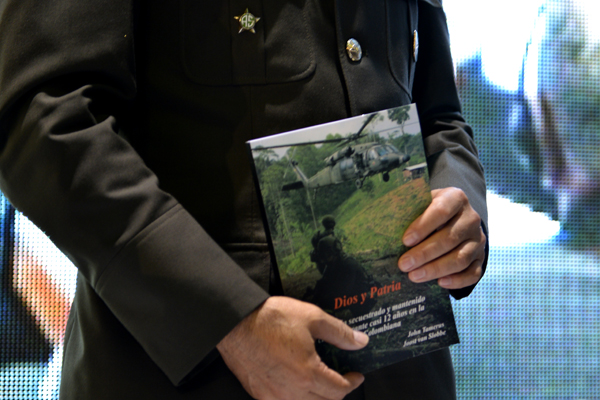 'Dios y Patria' was written by Dutch police officers as a testimony to Erazo’s dedication to the police and as an inspiration to all those around the world who fight against crime and terrorism. 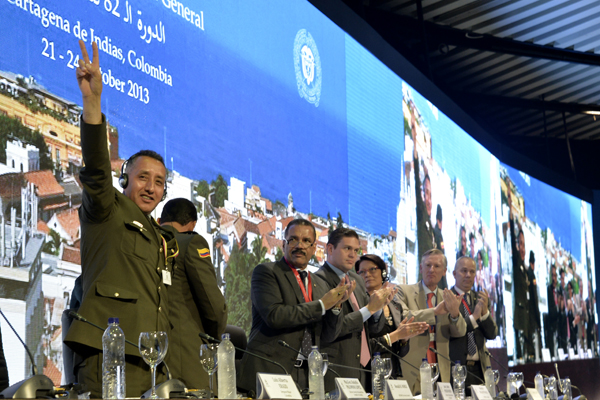 Colombian police officer Sergeant Luis Erazo Maya (left) was held hostage by the FARC for almost 12 years. A book launched at the 82nd session of the INTERPOL General Assembly tells his story. 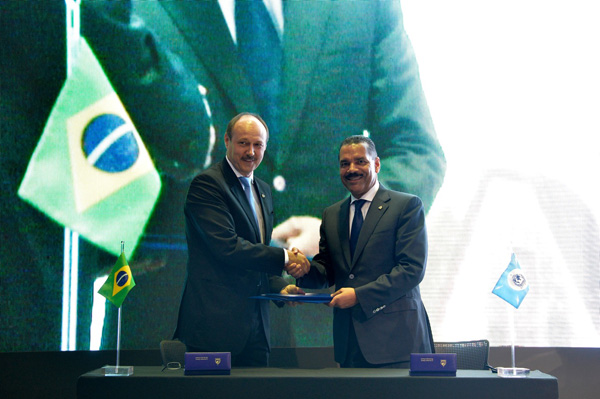 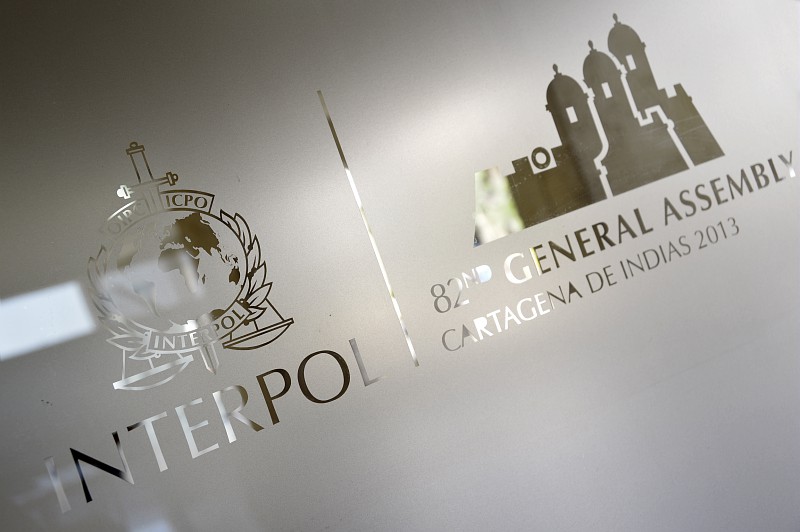 The General Assembly is INTERPOL's supreme governing body. It meets once a year and takes all major decisions affecting policy, resources, working methods, finances and activities. 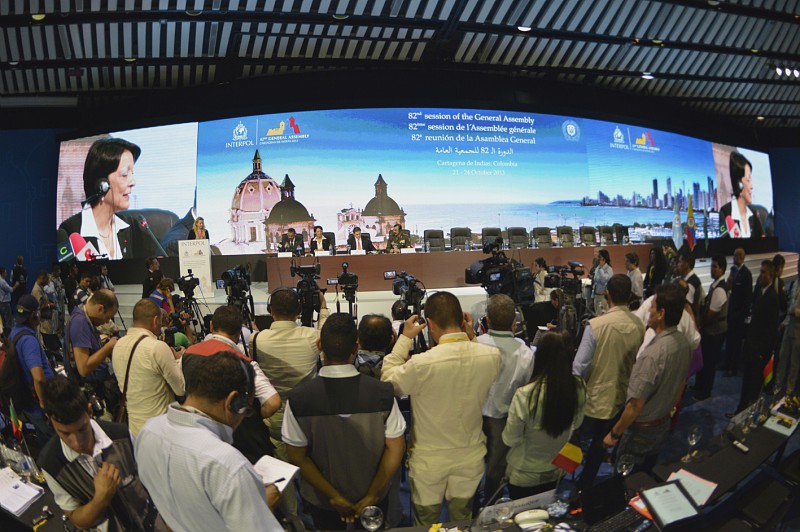 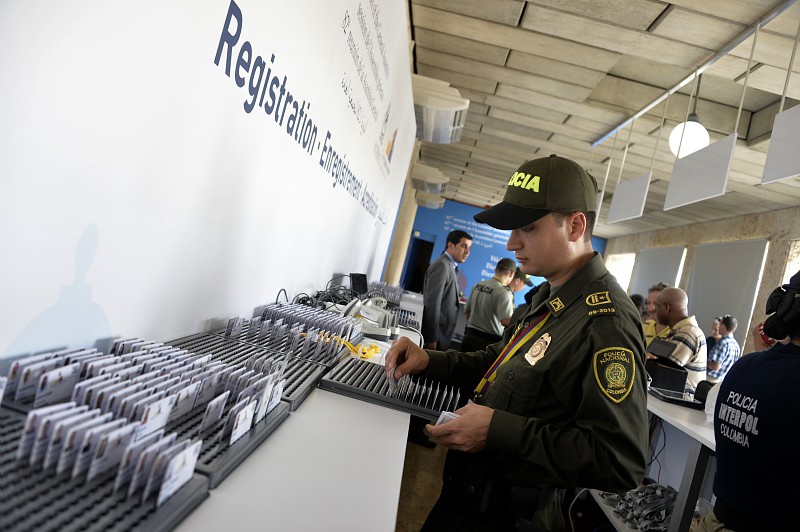 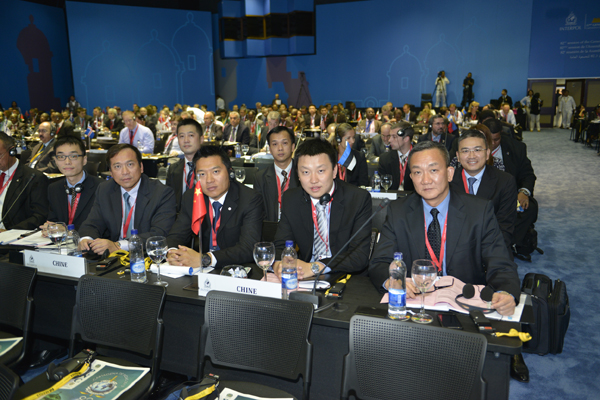 A total of 144 countries were represented at the conference. 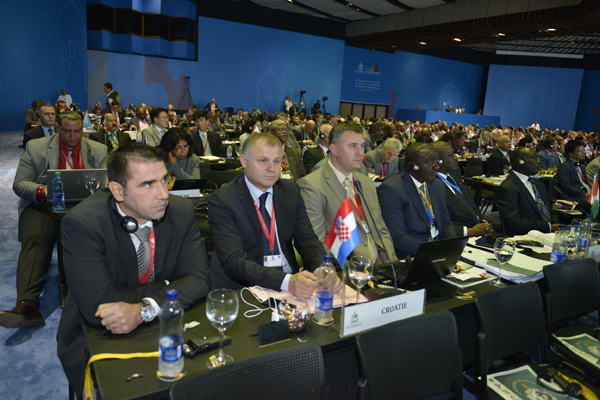 With the four-day (21-24 October) conference coming just one month after the Westgate shopping centre attacks in Nairobi, Kenya, senior police officials discussed the Organization’s priorities and strategic roadmap for the next three years, focusing on policing needs in the field addressing threats ranging from terrorism to cybercrime.

INTERPOL’s new e-extradition initiative, a technical platform which will significantly speed up and facilitate extradition requests through the world police body’s secure communications channels, was strongly endorsed as a ground-breaking initiative by delegates.

“The resolutions adopted by this General Assembly will develop and further strengthen the partnerships between INTERPOL and other international organizations,” said INTERPOL President Mireille Ballestrazzi.

“The various discussions and debates during the past four days reflect the collective experience of member countries and the INTERPOL General Secretariat, and will enable us all to continue to develop initiatives to enhance the safety of all citizens throughout the world,” concluded the President.

A key decision by delegates was the endorsement of a resolution for extrabudgetary resources to be identified in order to provide long-term financial assistance towards INTERPOL’s activities and operational support to all member countries in combating transnational crime and terrorism.

INTERPOL Secretary General Ronald K. Noble said the decisions taken by the General Assembly paved the way for the Organization to plan for its future and provide additional assistance to member countries.

“As the world’s largest police organization we must ensure that all of our 190 member countries can count on our support whenever and wherever needed,” said Secretary General Noble.

“Many of the decisions taken during this General Assembly will provide us with an even stronger framework to address the various transnational crime challenges facing the global law enforcement community,” concluded the INTERPOL Chief.

Strengthening relationships between police and prosecutorial authorities was also an important element during the conference, with the approval of a Memorandum of Understanding between INTERPOL and Eurojust.

At the conclusion of the conference Juan Carlos Pinzón Bueno, Minister of National Defence, announced Colombia’s recognition of the INTERPOL Travel Document (ITD) thereby significantly speeding up the ability for INTERPOL officials to respond to any calls for assistance or support. To date, 64 INTERPOL member countries have officially recognized the ITD.

The 83rd INTERPOL General Assembly will be held in Monaco, 100 years after the country hosted the first International Criminal Police Congress in 1914, where the idea of INTERPOL was born.