LYON, France – A joint effort by New Zealand, Australia and Norway to find a vessel suspected of illegal fishing has led to the publication of an INTERPOL Purple Notice to assist in identifying its location.

An INTERPOL Purple Notice has been issued to find a vessel suspected of illegal fishing. Pictured is ‘Thunder’ as Wuhan N 4 in Singapore, October 2012. 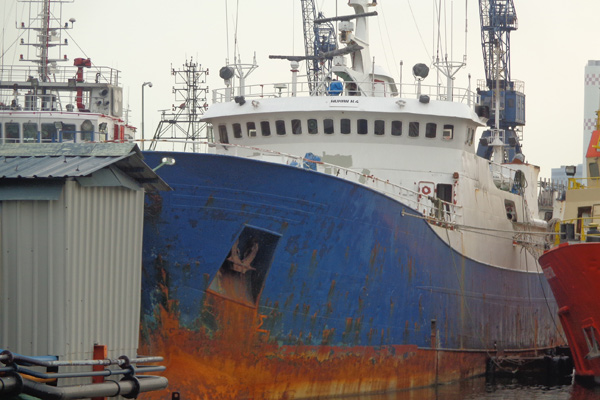 Circulated to all 190 INTERPOL member countries the Notice, requested by New Zealand supported by the Australian Fisheries Management Authority (AFMA) and the Norwegian Directorate of Fisheries, also seeks information about the individuals and networks which own, operate and profit from the suspected illegal activities of the vessel, currently believed to be called ‘Thunder’.

During the past two years, the vessel has operated under at least three different names and under several flags, in order to avoid detection of illegal fishing activities.

In April 2013, the same vessel requested access to a port in Malaysia under the name ‘Wuhan 4’ but when inspected a few days later in Indonesia, it was using the name ‘Thunder’ and with the Nigerian flag.

“Thunder has been operating under a number of names and flags over several years and we believe this is being done to avoid been caught violating international laws and conventions,” said Gary Orr, Manager, Operational Coordination with New Zealand’s Ministry for Primary Industries.

“Fisheries crime is not constrained by borders and is commonly carried out by transnational organized networks. Norway is deeply concerned about its global effects. We need an international, coordinated response to effectively tackle these networks, and I welcome the good cooperation we have established with Australia and New Zealand via INTERPOL,” said Norway’s Minister of Fisheries, Elisabeth Aspaker.

AFMA’s Fisheries Operations General Manager Peter Venslovas said illegal fishing activities seriously undermine the sustainability of fisheries: “Ongoing cooperation between countries across the globe to combat illegal fishing is having a real impact and making it harder for these operators to make a profit.”

It is possible that the owners of ‘Thunder’ have earned more than USD 60 million from its illegal fishing activities since it was blacklisted by the Commission for the Conservation of Antarctic Marine Living Resources (CCAMLR) in February 2006.

The vessel is currently believed to be operating in the Southern Ocean around Antarctica where it may be fishing illegally for Patagonian toothfish, also known as Chilean Sea Bass, a highly sought after protected species.

This is the third INTERPOL Purple Notice issued in connection with illegal fishing activities, with the first published in September this year at the request of Norwegian authorities for a vessel named ‘Snake’.