SAN SALVADOR, El Salvador – An INTERPOL-led operation against people smuggling through the Americas has led to 53 arrests and the identification of some 775 migrants from 30 different countries.

During Operation Turquesa (28-31 October), authorities in 20 countries across three continents acted on leads and carried out nearly one million checks at air, land and sea borders in order to disrupt the organized crime groups behind key smuggling routes to the USA and Canada.

Many of the investigative leads were generated as a result of Operation Andes (2018), which detected a significant migratory flow starting in South Asia, prompting Bangladesh to participate in Turquesa. The five days of simultaneous police action were driven by the INTERPOL Specialized Operational Network (ISON) against People Smuggling, which comprises 165 experts from 126 source, transit and destination countries.

INTERPOL’s Regional Bureau in San Salvador hosted the Operational Coordination Unit (OCU), with round-the-clock support from the Organization’s Command and Coordination Centre, and support by the United Nations Office on Drugs and Crime (UNODC).

A major outcome of Operation Turquesa was the arrest of a 32-year old man from Bangladesh believed to be behind one of the largest migrant smuggling networks into the United States. Brazilian authorities dismantled his entire network, which is alleged to have facilitated the illegal passage of more than 200 South Asians.

Authorities, which froze 42 bank accounts, estimate that the group made transactions totalling around USD 10 million, highlighting the scale of ‘business’ generated by these criminal organizations.

With profits at the forefront of criminal priorities, victims interviewed during Operation Turquesa outlined just how little regard handlers had for their well-being.

Migrants in Mexico reported being threatened with rape and murder if they did not pay smugglers within a few hours.

In Spain, a Bangladeshi national explained how his journey had cost EUR 6,000 and taken one year to reach Malaga. He was held captive in Algeria and threatened for several months, as his handlers extorted payment from his father. Once he was freed, they confiscated his passport and put him onto a packed boat across the Mediterranean. He lost consciousness on the way.

Make no mistake, these trips are usually treacherous - even deadly – whether through jungles, on boats, or as we’ve seen most recently, in lorries. Jürgen Stock, INTERPOL Secretary General

“Our duty is to connect police across continents, and along known routes to ensure that migrants do not fall victim to false promises of well-organized trips to a new life. Make no mistake, these trips are usually treacherous - even deadly - through jungles, on boats, or as we’ve seen most recently, in lorries,” concluded the Head of INTERPOL.

Police in El Salvador arrest a woman for human trafficking. 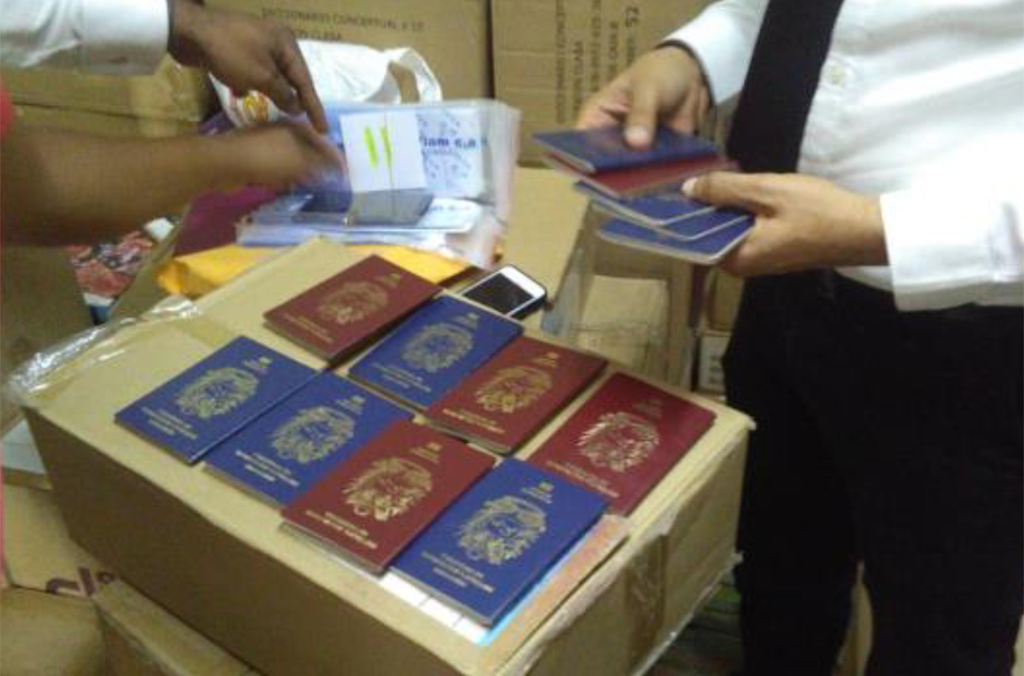 Seized passports in the Dominican Republic.
Officials in Costa Rica arrest a smuggler.
Police speak to migrants in Honduras.
An officer in Guatemala speaks with migrants.
Migrants in Mexico reported being threatened of violence.
Migrant interviews provide valuable information on modus operandi.
/

INTERPOL’s policing capabilities played a key role during the operation, with more than 300,000 checks made against its range of databases, resulting in 17 hits.

Thanks to reinforced border controls, seven individuals were detained on offences including drug trafficking and possession of firearms. In El Salvador, the subject of a Red Notice was arrested for the murder of a teenager in the Dominican Republic.

Additional results are expected in coming months as investigations continue and police work their way up smuggling networks.

AIRCOP, a multi-agency project based on cooperation between the UNODC, INTERPOL and the World Customs Organisation, provided pre-operational training to the Dominican Republic’s national police and liaised with the OCU in San Salvador on data relating to passenger checks.

UNODC will provide assistance to the ISON on open investigations via REDTRAM/AIAMP, the Ibero-American network of specialized prosecutors on trafficking in persons and smuggling of migrants. The Organization will also provide its mandated expertise on migrant smuggling by participating in the production of a final analytical report.

Operation Turquesa was supported by funding from the INTERPOL Foundation for a Safer World.

“This crime, silent and almost invisible by nature, is transnational and combating it can only by strengthened by international cooperation. INTERPOL’s invitation for Brazil to join Operation Turquesa came at an opportune moment. Our police operations have gained force and their results have been surprisingly maximized.” ISON member, Brazil
“The Dominican Republic opened many investigations thanks to this operation. We will carry out a number of search warrants in the coming days. INTERPOL was the strategic leader of all this. The operation was possible thanks to INTERPOL’s capabilities.” ISON member, Dominican Republic