LYON, France – INTERPOL has issued an international security alert, or Orange Notice, detailing the features of the improvised explosive devices used in the Boston marathon bombings to assist law enforcement across its 190 member countries detect any similarly configured bombs. 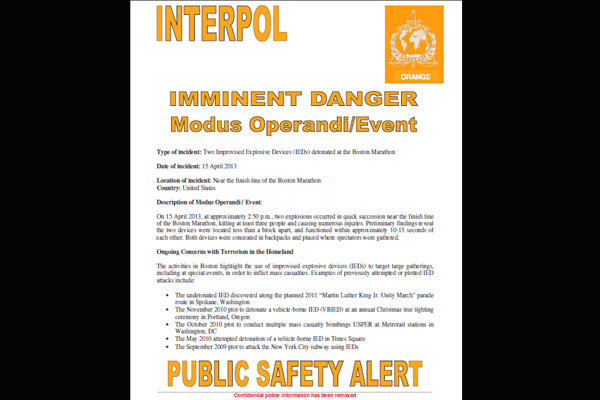 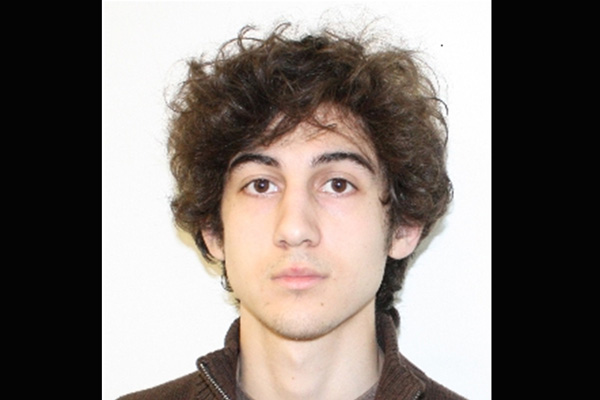 US authorities are seeking the location of, and information about, Dzhokar Tsarnaev, a suspect in the bombings at the Boston Marathon on April 15, 2013.
/

The INTERPOL Orange Notice, requested by the US authorities, contains photographs of the devices and identifying information including the fingerprints of the two suspects, 19-year-old Dzhokar Tsarnaev, currently being sought by authorities in the US, and his brother Tamerlan Tsarnaev, aged 26, who died after a shoot-out with police in Boston in the early hours of Friday.

A public version of the Orange Notice – with confidential police information removed – is also being made available by the world police body.

“The decision by the FBI and US authorities to request an INTERPOL Orange Notice will enable police services and other law enforcement agencies around the world to advise US law enforcement authorities whether they've come across similarly designed devices in their own investigations,” said INTERPOL Secretary General Ronald K. Noble.

“Equally as important is the decision by the INTERPOL National Central Bureau in Washington to authorize a sanitized version to be circulated to the public, as their vigilance can be essential in alerting law enforcement to potential threats.

“One of INTERPOL’s core missions is to ensure that national law enforcement authorities have the information they need to help protect their citizens from any threats, and we will continue to liaise closely with each of our member countries during this investigation,” concluded the INTERPOL Chief.

According to US law enforcement authorities, the two devices which exploded on Monday were concealed in backpacks and placed near the finishing line of the Boston marathon. The terrorist bomb attacks resulted in the death of three people, including an eight-year-old boy, and injured more than 170 others.

Issued by the Command and Coordination Centre at INTERPOL’s General Secretariat headquarters in Lyon, all member countries have also been requested to circulate the Orange Notice to relevant law enforcement agencies in their countries, and to share any information on the suspects and modus operandi with the FBI and US law enforcement authorities.

Members of the public with information about the suspects or the devices used are advised to contact the US Federal Bureau of Investigation as indicated on their web page and news alerts.

Created in 2004, the INTERPOL Orange Notice is used to warn police, public entities and other international organizations of potential threats related to disguised weapons, explosives and other dangerous materials. It can also be issued by the General Secretariat for any act or event which poses a risk to the safety and security of citizens around the globe. To date, nearly 200 Orange Notices have been issued.