In his opening remarks to the 71st General Assembly Session, taking place this week in Yaoundé (Cameroon), INTERPOL President Jesús ESPIGARES MIRA said that the Organization has to take further measures to remain at the forefront of international police cooperation. In particular he pointed to the necessity for INTERPOL to gain the required financial resources to carry through all its important activities.

Following the terrorist attacks in the USA on September 11, 2001, INTERPOL has reshaped and reorganized itself to fight terrorism, Secretary General Ronald K. NOBLE told the general assembly. He outlined some of the ways INTERPOL has reacted over the last twelve months to help national police forces confront the threat of terrorism by enabling agencies to exchange critical data. This occurred most recently in Bali, Indonesia following last week's terrorist bombing. INTERPOL's response included the establishment of a secure, internet-based system (I-24/7) to enable the rapid exchange of photographs and fingerprints data between member countries.

Mr Noble revealed that by the close of this week's general assembly, 17 member countries would have the new system 'on line', with another 40 due to be linked up by the end of this year. The goal was to have all INTERPOL members connected to the system as soon as possible, he said.

Over the next days the general assembly will discuss the setting of international policing priorities, how to further strengthen the worldwide fight against terrorism, and a brand new global communications system for criminal police cooperation, as well as other critical issues. 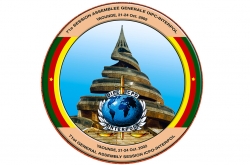