A new INTERPOL report on online organized crime in Africa shows how digitalization is transforming almost every major crime area across the continent.

“Online crime now represents a bigger security issue for law enforcement in Africa than ever before,” reads the report, which goes on to detail how the different layers of the Internet (surface web, deep web and dark web) are being used by organized crime groups in Africa to perpetuate crimes.

Africa continues to rank lowest in rates of Internet connectivity in the world. In 2019, only 28% of Africans were reportedly using the Internet, compared to 83% in Europe, according to figures from the International Telecommunications Union cited in the INTERPOL report.

However, relatively low rates of online connectivity have not stopped organized crime groups from taking advantage of the Internet.

Malware incidents are increasingly prevalent in Africa. In one East African country alone, the cost of cyber fraud more than doubled between 2017 and 2018, reaching nearly USD 6.5 million.

Even the criminal activities that have longed formed the ‘bread and butter’ of organized crime groups are being digitalized.

Social media is used to facilitate migrant smuggling, as evidenced by the INTERPOL-supported Operation Sarraounia, which saw the rescue of 232 victims of human trafficking in Niger, 46 of whom were minors. The operation revealed that 180 male victims had been recruited online with messages that promised “decent work”.

As in other world regions, organized crime groups in Africa also use the Internet to facilitate the sexual exploitation and abuse of children, leveraging digital tools to contact and solicit victims as well as sell child sexual abuse materials.

The African continent is also a growing global transit hub for the trafficking of drugs and a range of illicit commodities, with narcotics, pharmaceuticals, stolen motor vehicles and other goods sold and bought online on the surface, deep and dark web.

A key factor driving the increase in Internet-enabled crime in Africa is that many countries lack comprehensive policies and strategies to combat cybercrime, the report argues.

While the African Union (AU) adopted the Convention on Cybersecurity and Personal Data Protection in 2014. By January 2020, only 14 out of 55 AU member countries had signed the convention by January 2020.

The convention needs to be ratified by at least 15 member countries to enter into force. As of January 2020, only seven countries had ratified it.

“This shows that cybersecurity is still not perceived as a necessity by many African countries, which further exacerbates the problem,” the report reads.

Project ENACT is the first initiative of its kind to cover the entire African continent in analysing the scale of organized crime and its impact on security, governance and development. This analysis serves to inform decision-makers and strengthen law enforcement cooperation at regional and continental levels.

Project ENACT is funded by the European Union and implemented by INTERPOL and the Institute for Security Studies, in partnership with the Global Initiative Against Transnational Organized Crime. 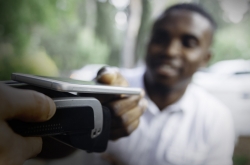