LYON, France – A global operation tackling the illegal trade in wildlife and timber has resulted in the identification of nearly 900 suspects and 1,300 seizures of illicit products worth an estimated USD 5.1 million. 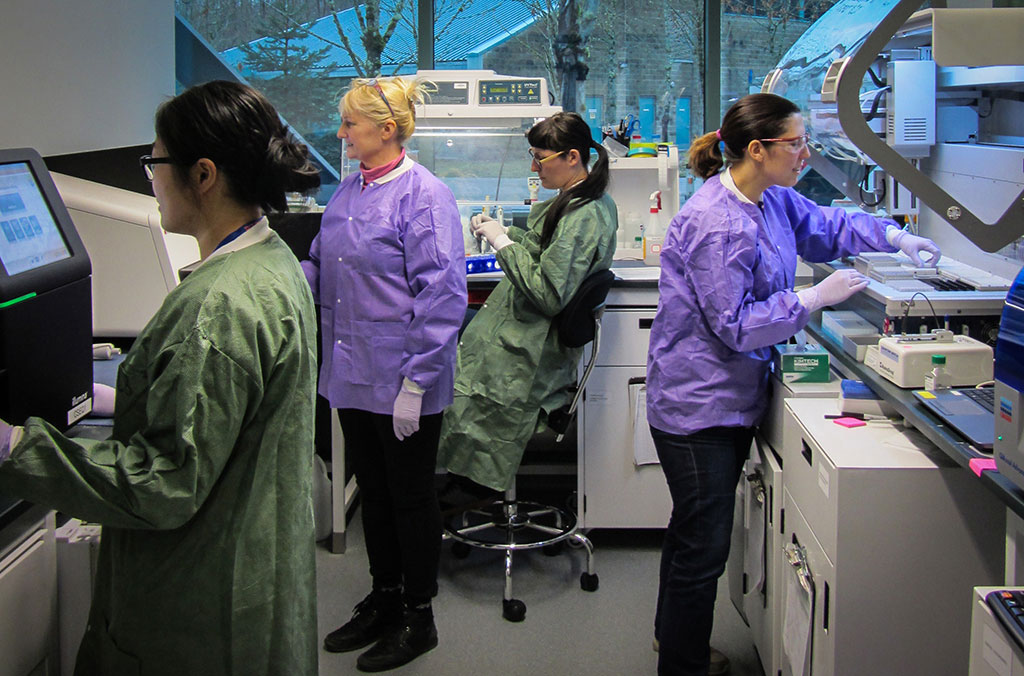 Additional checks of seizures were carried out by specialist laboratories. 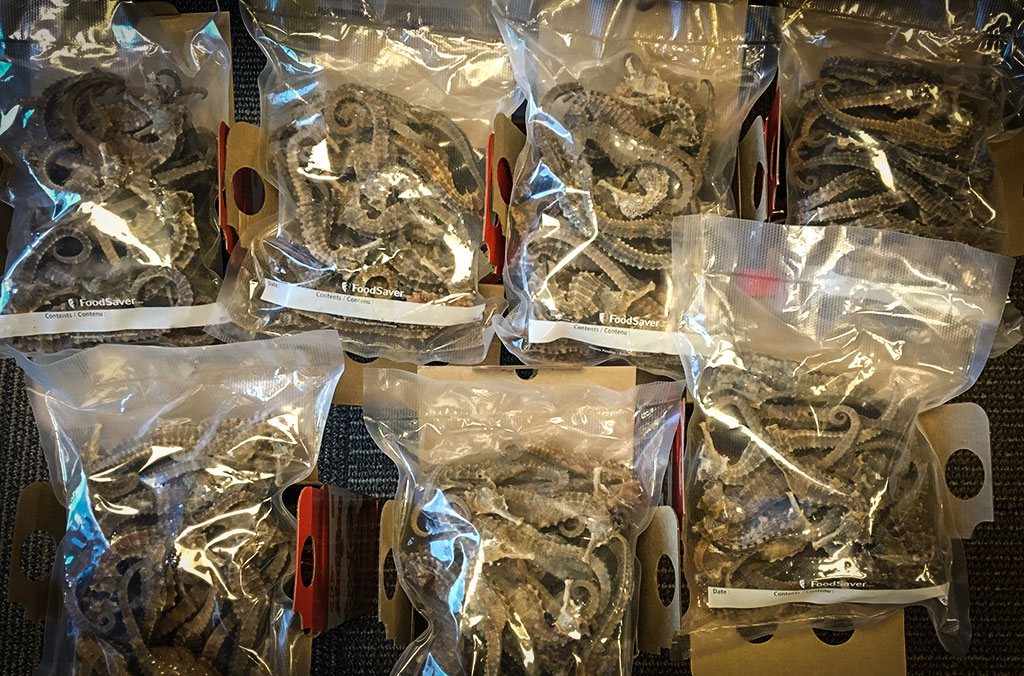 During Operation Thunderbird, the US Fish and Wildlife Service discovered 180 dead seahorses which were being smuggled inside snack boxes. 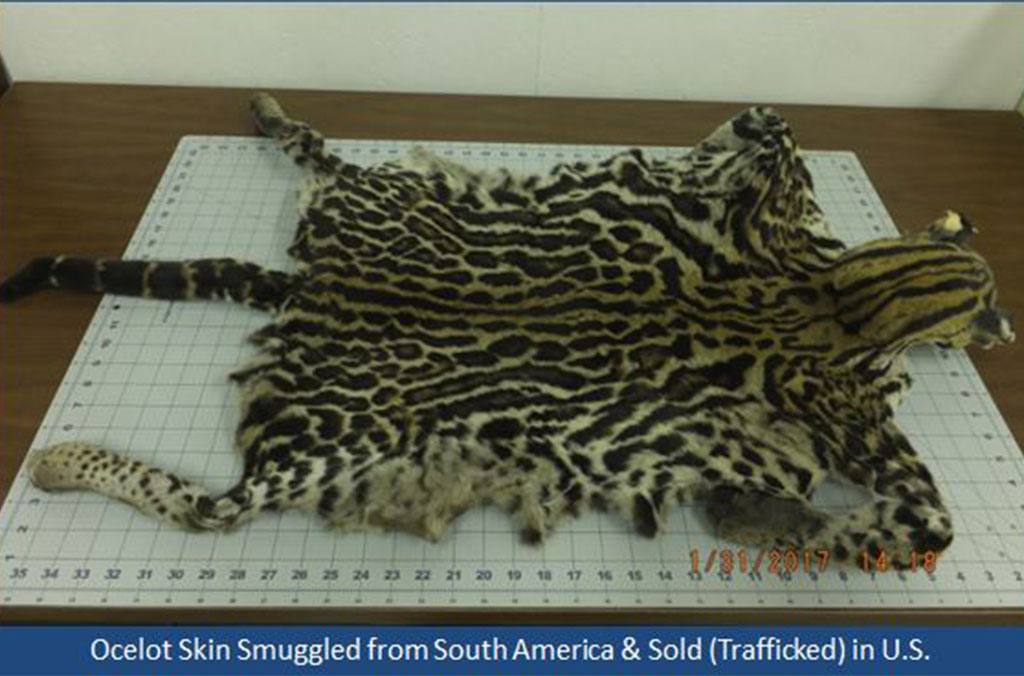 More than 310 skins from various animals were recovered during Operation Thunderbird, including this recovered Ocelot skin. 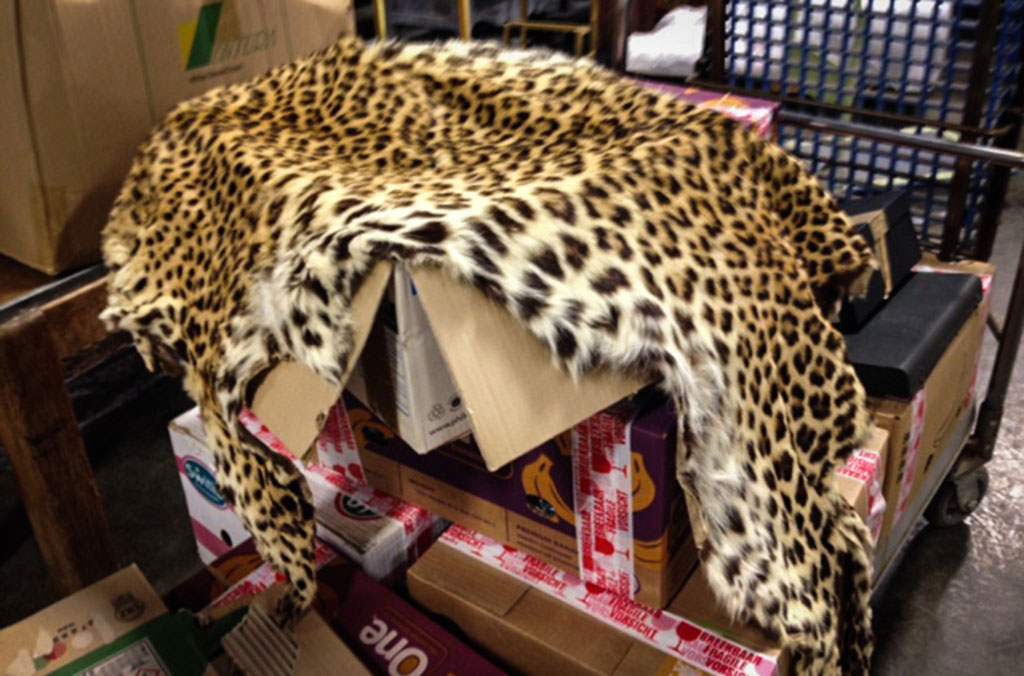 The three-week operation has so far resulted in 370 investigations which have already led to 89 individuals being jailed with terms ranging from several days to seven years. 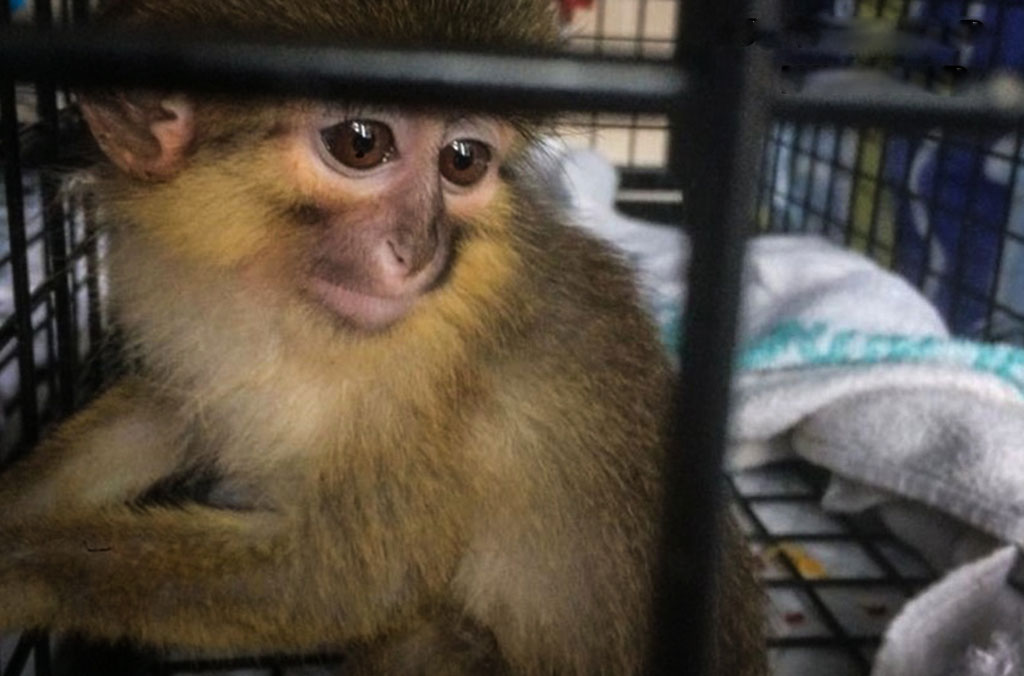 The anti-wildlife smuggling operation, codenamed Thunderbird, resulted in the rescue of a range of animals, including this monkey seized in Spain. 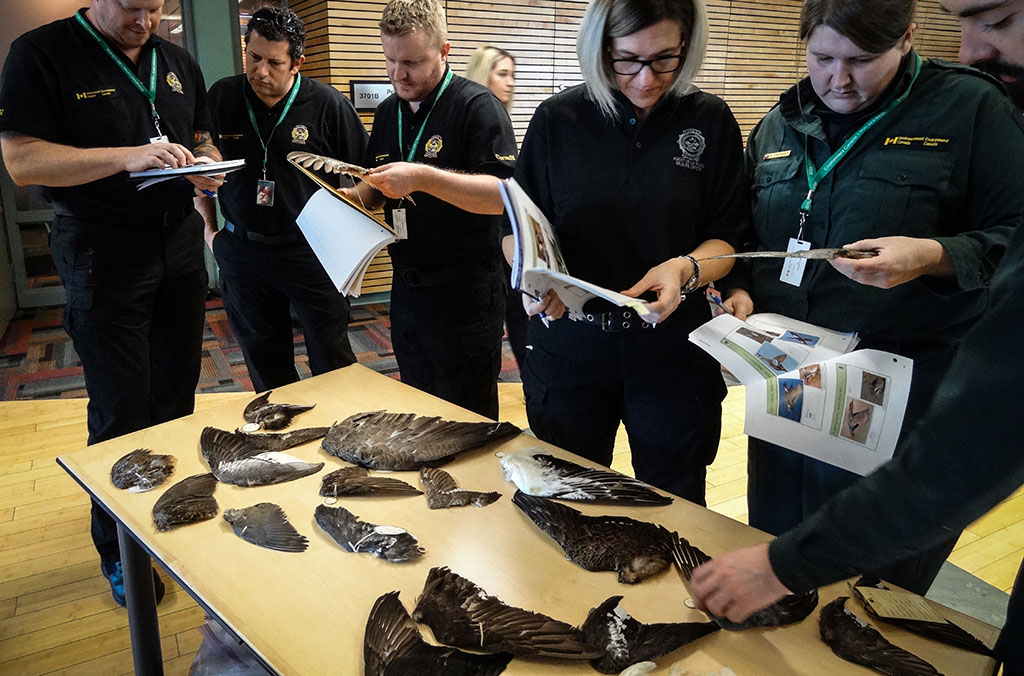 Training is essential in combating all forms of environmental crime. Here wildlife officer candidates are learning how to identify waterfowl by their wings. 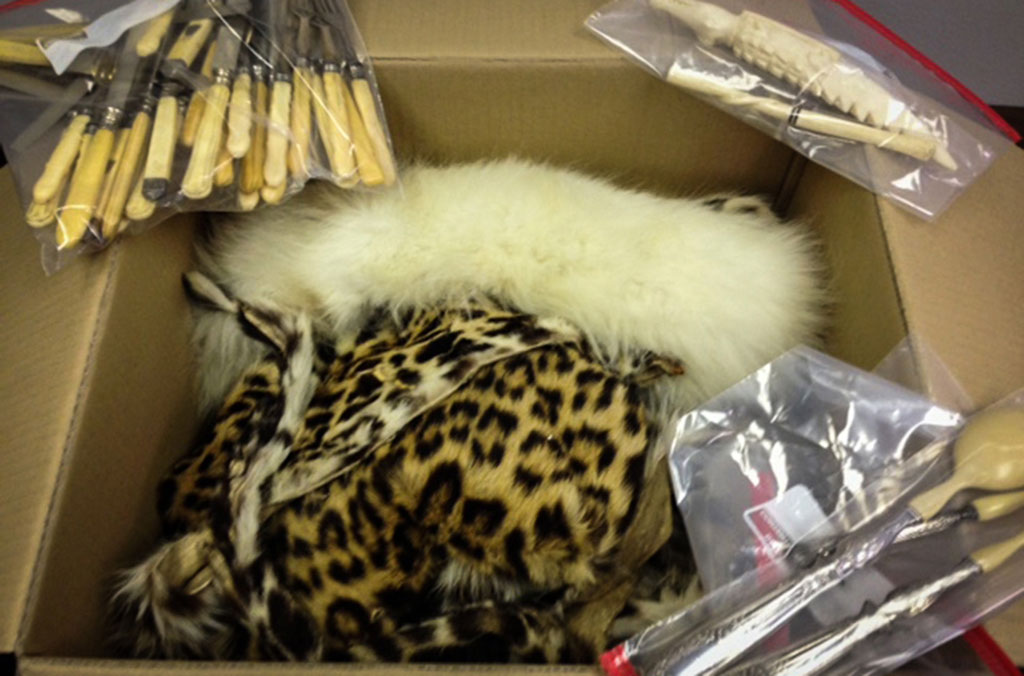 Illicit leopards skins and ivory products seized by officials in the US during Operation Thunderbird. 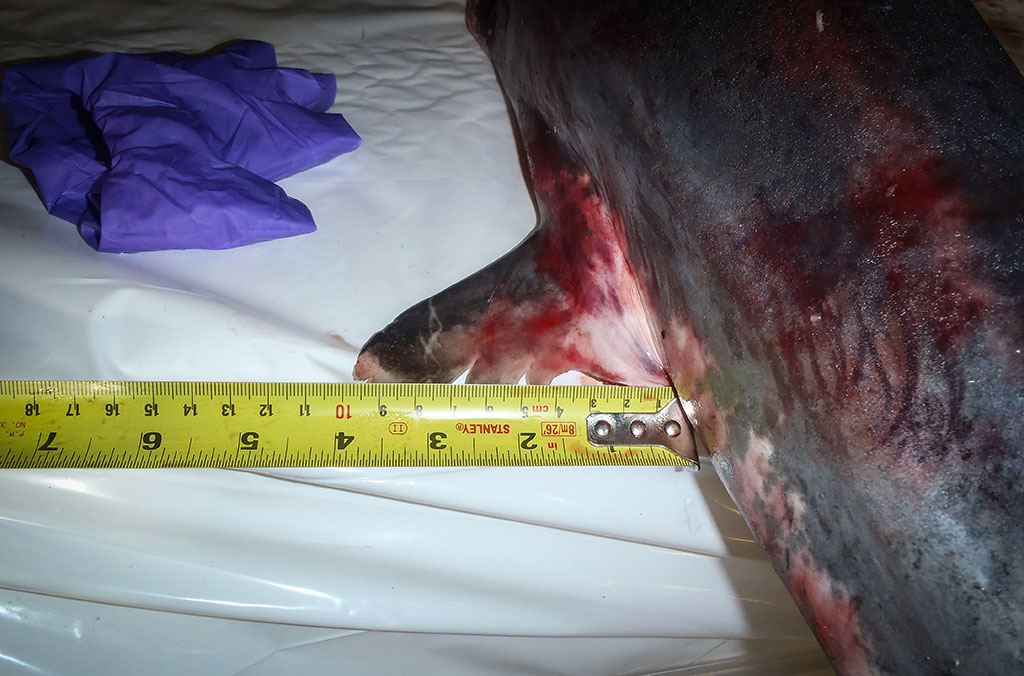 More than 14.3 tonnes of marine wildlife were seized during the operation, including in Canada where authorities recovered this shark. 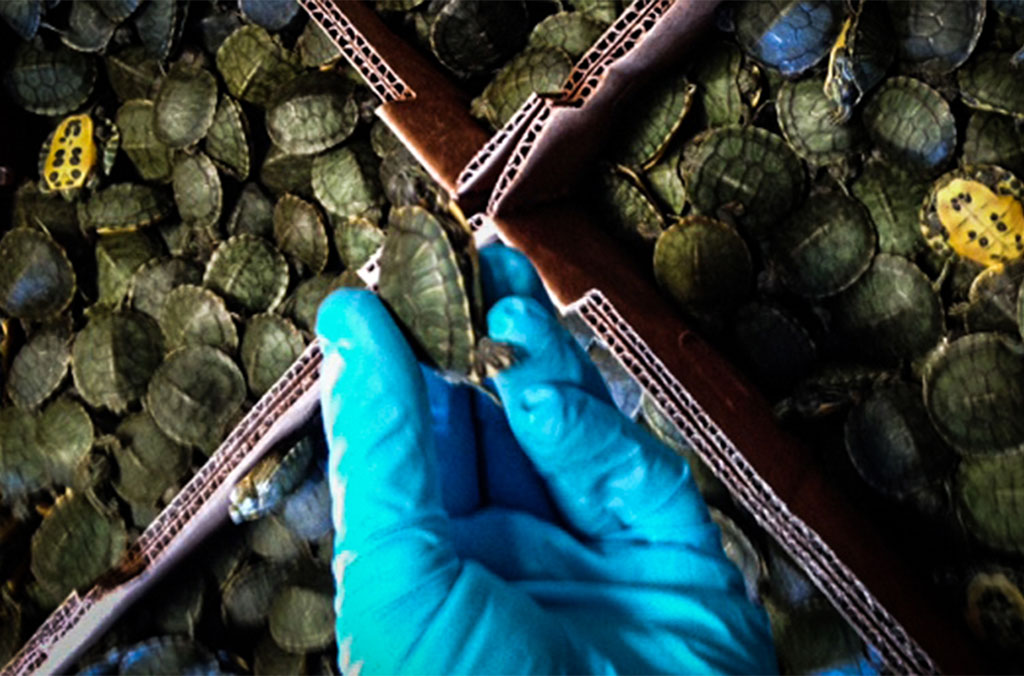 A global operation tackling the illegal trade in wildlife and timber coordinated by INTERPOL has resulted in the identification of nearly 900 suspects and 1,300 seizures of illicit products. 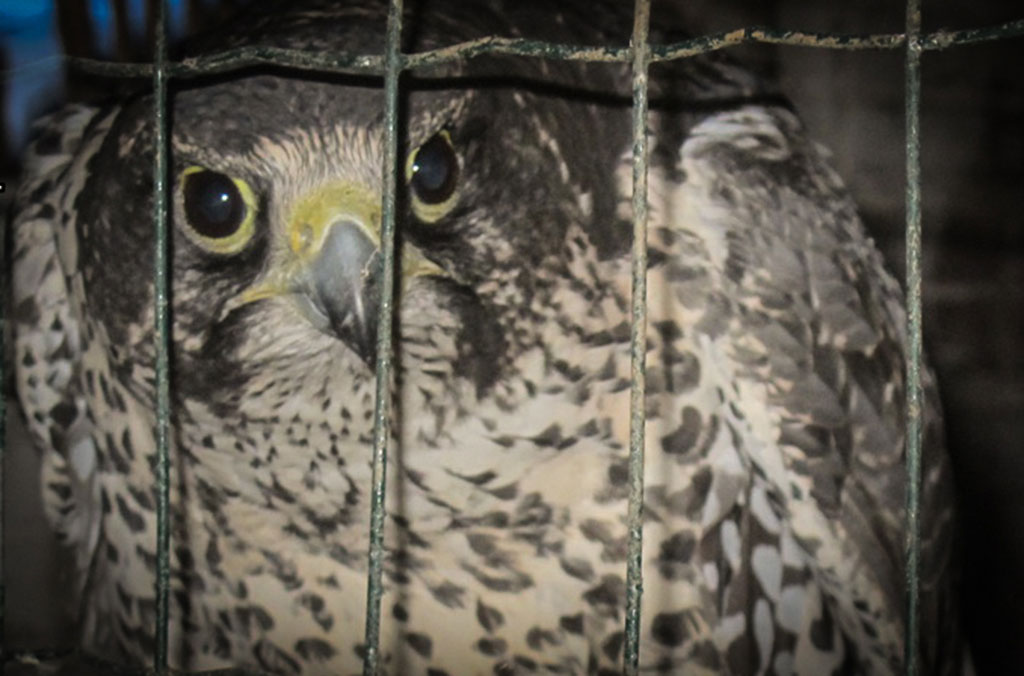 Spanish police recovered this falcon, one of 4,770 birds seized during Operation Thunderbird. 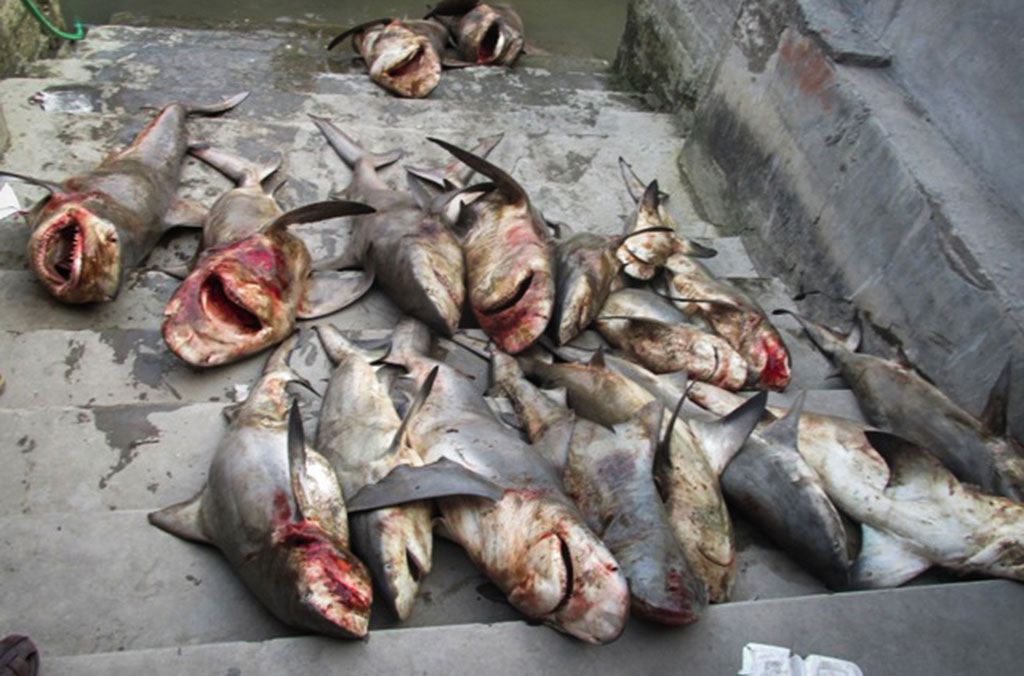 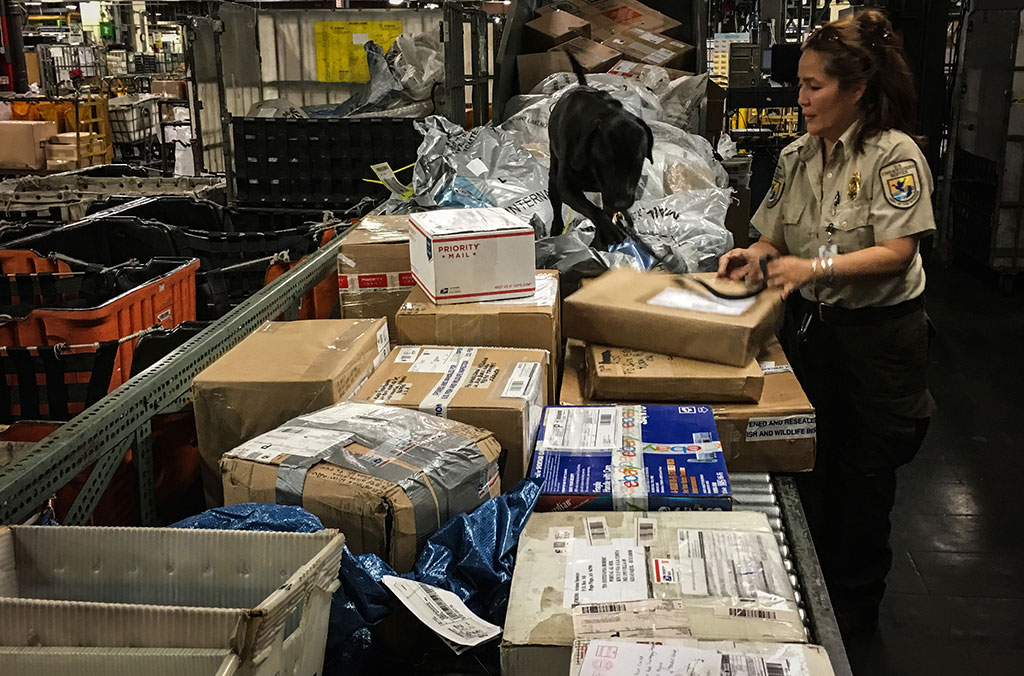 Intelligence was gathered and shared ahead of the operation to assist in identifying specific targets and areas for action. One area of focus included the postal service. 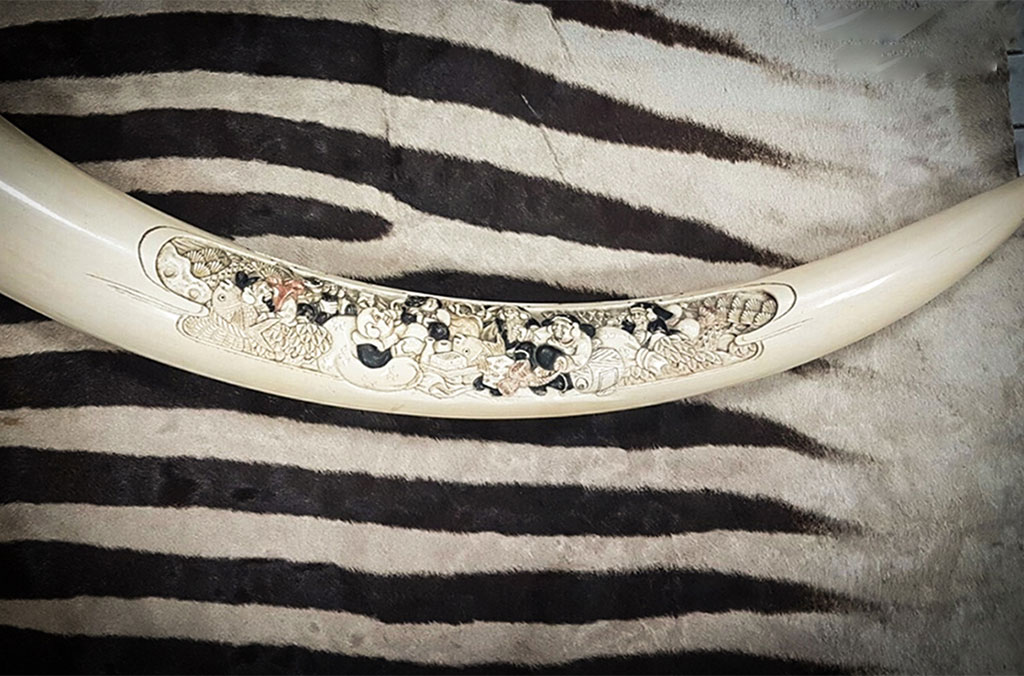 Around 2.54 tonnes of raw and processed ivory were seized during Operation Thunderbird which involved 43 countries and territories around the world. 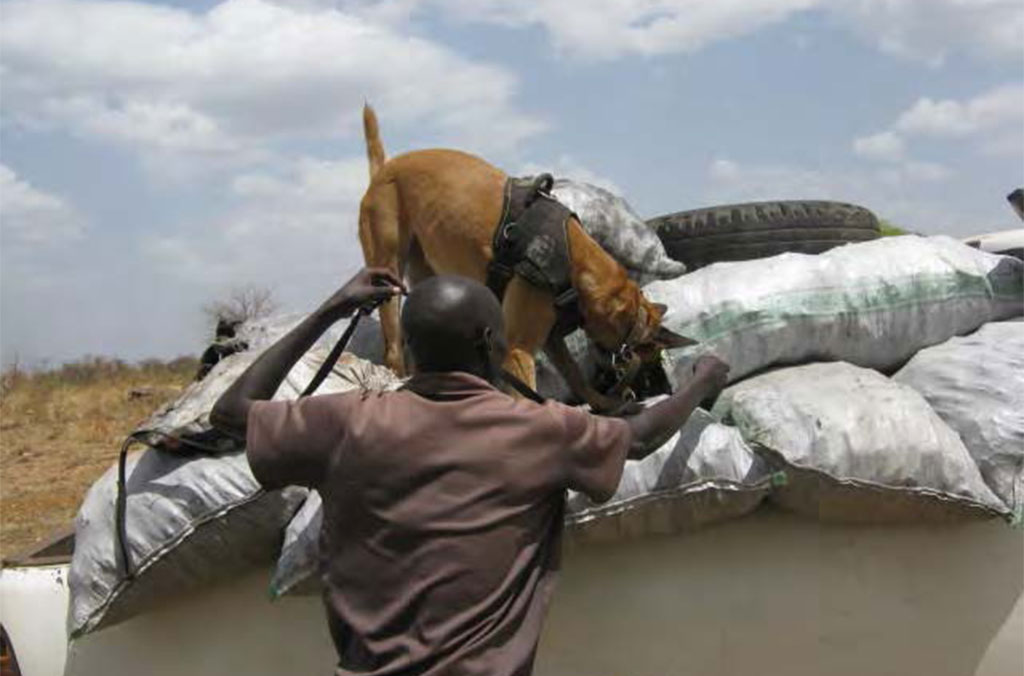 Cars, trucks, boats and cargo transporters suspected of moving illicit products were also targeted with searches carried out by officers, specialist sniffer dogs and x-ray scanners, including at this checkpoint in South Sudan. 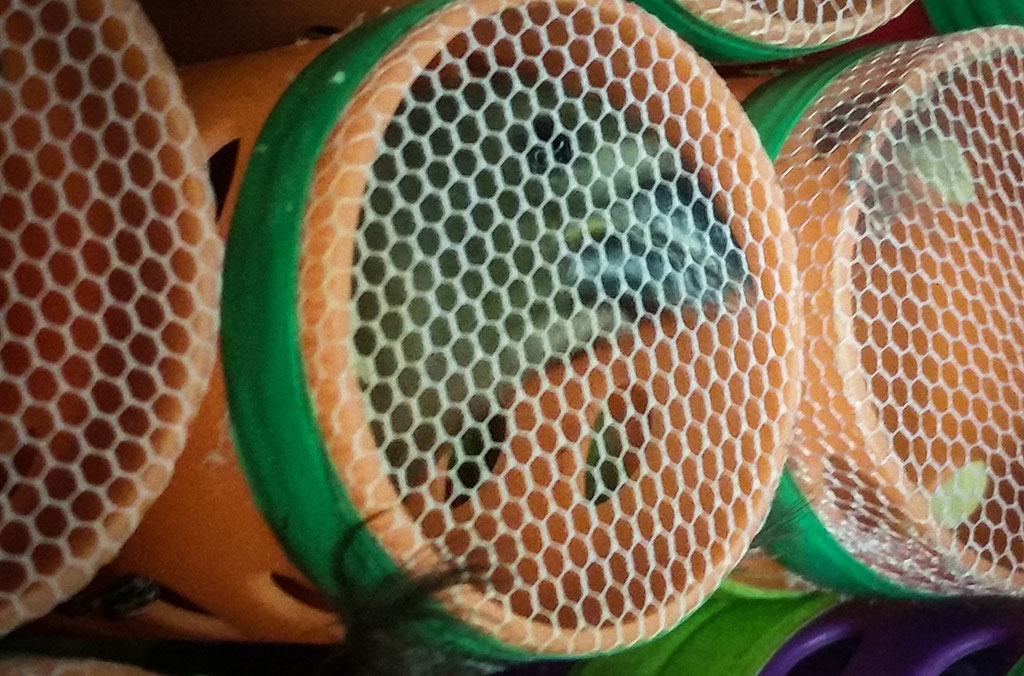 Birds were amongst the highest number of species recovered during Operation Thunderbird. These finches were being smuggled in New York. 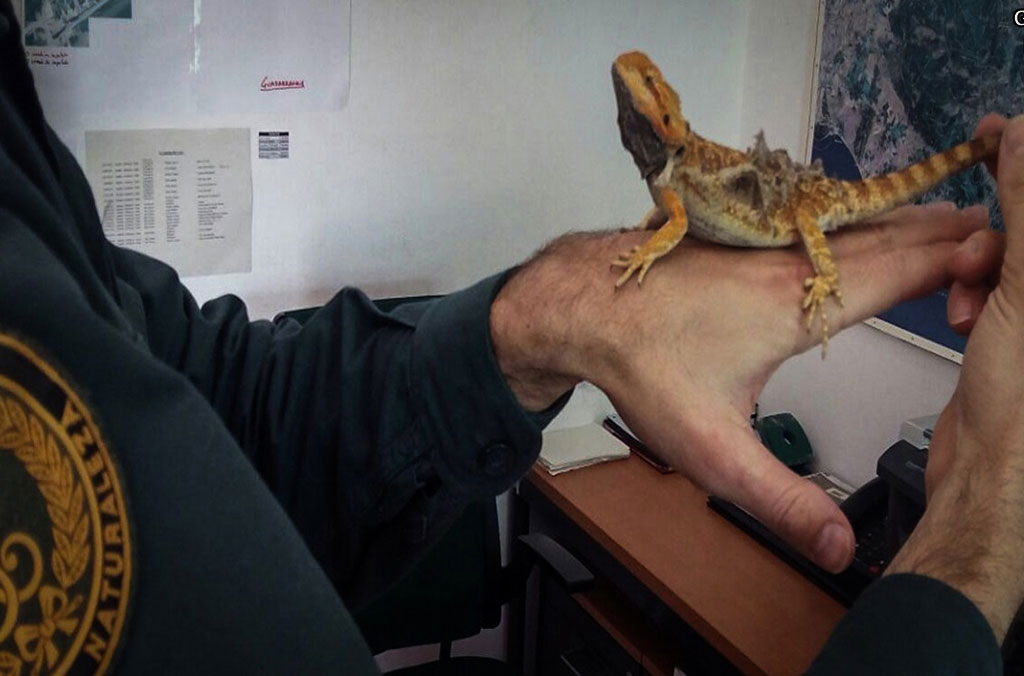 Some 1,240 reptiles were recovered during the three-week (30 January – 19 February) Operation Thunderbird, which was coordinated by INTERPOL. 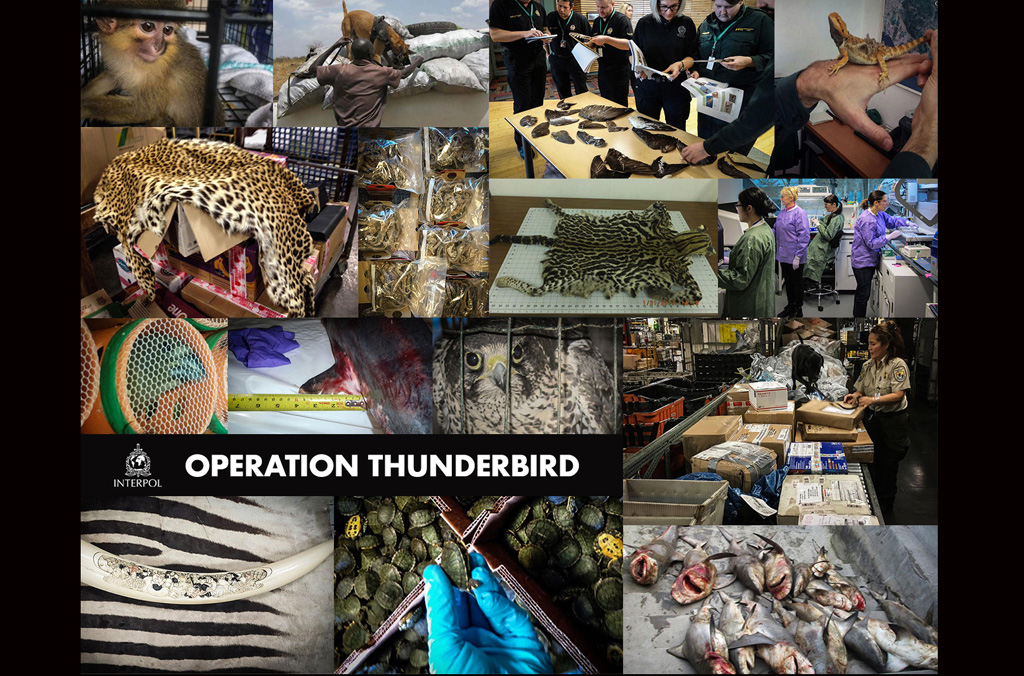 The results, announced ahead of World Wildlife Day (3 March), mark INTERPOL’s ongoing commitment to supporting its 190 member countries in combating all types of environmental crime.

Codenamed Thunderbird, the operation involved police, customs, border agencies, environment, wildlife and forestry officials from 49 countries and territories, and resulted in a range of seizures including;

Among the more than 14.3 tonnes of marine wildlife seized were 180 dead seahorses which had been concealed in snack boxes discovered by US authorities, with additional seahorse seizures also made in Mozambique.

Intelligence was gathered and shared ahead of the operation to assist in identifying specific targets and areas for action. These included wildlife and forest crime hotspots and bottlenecks where checkpoints could be established, in addition to operations at airports and national borders.

The three-week (30 January – 19 February) operation has so far resulted in 390 investigations which have already led to 88 individuals being jailed with terms ranging from several days to seven years.

“Wildlife trafficking has surged in recent years, generating billions in illicit profits. Simply put, criminals are helping themselves to the environment’s precious resources without a care for the cost to our planet,” said INTERPOL Secretary General Jürgen Stock.

“The success of this operation is a demonstration of what can be achieved by transnational law enforcement collaboration, and the resolve of countries to tackle environmental crime. INTERPOL also remains committed to tackling wildlife and forest crime across the globe, to protect today’s resources for tomorrow’s generations,” concluded the INTERPOL chief.

“The WCO commends the continuous initiatives of the Customs community and their law enforcement counterparts to secure the integrity of the global supply chain against the illegal movements of wildlife and timber products. Operation Thunderbird bears proof of the effectiveness of international cooperation and all role-players are encouraged to continue with their relentless efforts in this regard,” said the Secretary General of the World Customs Organization (WCO), Dr Kunio Mikuriya.

Led by INTERPOL, in close cooperation with ICCWC partners - the Secretariat of the Convention on International Trade in Endangered Species of Wild Fauna and Flora (CITES), WCO, the United Nations Office on Drugs and Crime and the World Bank - the INTERPOL Wildlife Crime Working Group, the US Fish and Wildlife Service, the UK Border Force and Environment Canada, Operation Thunderbird was organized at meetings held alongside the 17th meeting of the Conference of the Parties to CITES (CoP17).

“Illicit wildlife trafficking must be tackled on the frontline and the officers who serve to protect wildlife need our full support. This well focussed operation brought together officers who are working in countries and regional enforcement bodies to tackle wildlife crime and we welcome the excellent results and thank all involved for their efforts. It clearly shows what can be achieved through coordinated efforts to tackle illicit wildlife trafficking,” said John E. Scanlon, CITES Secretary General.

The intelligence and data collected from the operation will be compiled, analysed and used as guidance in future national, regional and international enforcement efforts.

A joint INTERPOL – UN Environment report published in June 2016, estimated the value of all forms of environmental crime - including the illegal trade in wildlife, corporate crime in the forestry sector, the illegal exploitation and sale of gold and other minerals, illegal fisheries, the trafficking of hazardous waste and carbon credit fraud - as between USD 91-258 billion. However, these figures are expected to increase with current estimates showing environmental crime growing at a rate of five to seven per cent annually.