Officers checked more than 12,000 individuals, vehicles, containers and goods against international criminal databases, and carried out physical searches, to determine if suspects were using stolen travel documents, were known to police in any of INTERPOL’s 194 member countries, or were travelling in a stolen vehicle.

As well as arresting a number of suspected terrorists, officers seized firearms and a range of illicit goods:

“Trafficking in firearms is a lucrative business which, in turn, fuels and funds other types of serious crimes,” said INTERPOL Secretary General Jürgen Stock. “Operation KAFO II shows the need to connect the dots between crime cases involving firearms and terrorists across different countries.”

The Operation mobilized 260 officers from police, gendarmerie, national commissions for the control of small arms and light weapons, customs and anti-trafficking airport units, and border and prosecution services in all four countries.

“The fight against illicit firearms trafficking requires strong international and inter-agency cooperation, to identify the source of these arms and bring perpetrators to justice,” said UNODC Executive Director Ghada Waly. “After the operational phase of KAFO II, it is important that UNODC and INTERPOL continue working together and support ongoing investigations and open cases.”

Given that firearms trafficking is often associated with other forms of contraband, Operation KAFO II also focused on disrupting the flow of other types of illicit goods used to finance criminal and terrorist activities in the region.

New trends observed in this second edition of the KAFO operation included the seizure of contraband gasoline in large quantities in Niger and Mali. It is believed the fuel came from Nigeria, and was trafficked to both finance and supply Al-Qaeda and its affiliates.

Also, more than 40,000 sticks of dynamite and detonator cords were seized across several places, all intended for illegal gold mining which constitutes a new source of financing, and even a recruiting ground, for armed terrorist groups in the Sahel.

Finally, against the backdrop of the current COVID-19 health crisis, officers also seized large quantities of contraband hand sanitizer gels, gloves and drugs, for which the market is flourishing.

Pre-operational training delivered jointly by INTERPOL and UNODC ensured that officers had the skills required to use INTERPOL’s operational capabilities to their full potential.

Officers were trained on how to use INTERPOL’s illicit Arms Records and tracing Management System (iARMS) to detect, identify and trace illicit firearms.

Using iARMS, several hundred firearms recovered in the four countries over the past year were identified and traced back to the countries of manufacture or last known legal import to track their history of ownership and movements. By collecting this investigative crime intelligence ahead of the operation, participating countries were better able to target firearms trafficking suspects, networks and hotspots.

Investigations are under way following the seizures, for which tracing the history and ownership of all recovered illicit firearms is essential in order to build a strong case for prosecution.

Operation KAFO II was made possible with the support from Germany, France, Italy, and the European Union.

INTERPOL’s iARMS database is funded by the European Union. Law enforcement officers across the world can use iARMS to screen seized weapons against millions of records of lost, stolen, trafficked and smuggled firearms, and can share sensitive and urgent police information with their counterparts around the globe. 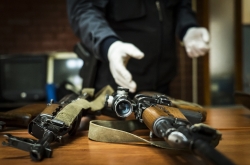