TUNIS, Tunisia – Addressing the Arab Interior Ministers Council, INTERPOL Secretary General Jürgen Stock said the increasing cooperation between the two organizations was important to enhancing security across the region and beyond.

In this respect, the INTERPOL Chief pointed to the Organization’s Chiefs of Police of the Middle East and North Africa meetings, the most recent held in Marrakesh in November 2019, which brought together some 60 senior law enforcement officials from 17 countries.

With active conflict zones across the region, Secretary General Stock said one of INTERPOL’s priorities was to sustain access to critical information from these theatres and the capacity of National Central Bureaus to help protect citizens.

As well as being one of the fastest growing regions for information exchange via INTERPOL, recent operations conducted throughout the Middle East and North Africa have resulted in arrests of terrorist suspects and other criminals. 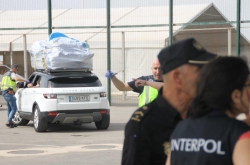