TUNIS, Tunisia – The Head of INTERPOL has told a meeting of the Arab Chiefs of Police that their experience and expertise play a fundamental role in shaping the international response to global threats.

Speaking at the meeting convened under the Arab Interior Ministers Council (AIMC), Secretary General Stock said that today’s security threats, including terrorism, more than ever require regional and global cooperation.

The INTERPOL Chief highlighted the positive examples of information sharing. Whilst every year, more and more hits against INTERPOL databases are registered across the globe, nowhere is this increase as important as in the Middle East and in North Africa.

Collaboration helps ensure that the right police information reaches the right officer at the right time, said the INTERPOL Chief.

The region has seen the number of hits registered at its border points and across its specialized agencies increase by 37 per cent in the last year. In parallel, hits recorded by the rest of the world on data shared by AIMC countries has increased by 52 per cent in the same period.

“Collaboration helps ensure that the right police information reaches the right officer at the right time, thereby enhancing our common efforts to protect citizens from the threat of transnational crime and terrorism,” added the INTERPOL Chief.

Secretary General Stock pointed to the growing web of partnerships interlinking INTERPOL and the Arab world.

INTERPOL has been working closely alongside agencies in the region, through capacity building, coordinated operations and on-the-ground support.

This includes deployments to Libya and Iraq this year to assist with the collection of biometric data of terrorist inmates across detention centres as part of INTERPOL’s Project FIRST.

Secretary General Stock also pointed to the growing web of partnerships interlinking INTERPOL and the region, and between the Arab world and member countries in other regions.

Secretary General Stock underlined the role of regional and global cooperation at a meeting of the Arab Chiefs of Police.

In this respect, Naif Arab University for Security Sciences has committed to host future editions of the INTERPOL Policing Capabilities Programme to train staff from INTERPOL National Central Bureaus in the region.

Naif Arab University is a key partner of INTERPOL’s cooperation network with academic and research bodies, to the benefit of law enforcement capabilities across the region.

With the sponsorship of the United Arab Emirates, INTERPOL will also once again hold the INTERPOL Young Global Police Leaders programme in the region in order to empower the next generation of international police leaders. 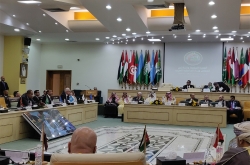