The General Assembly is INTERPOL's supreme governing body and comprises delegates appointed by the governments of our member countries. 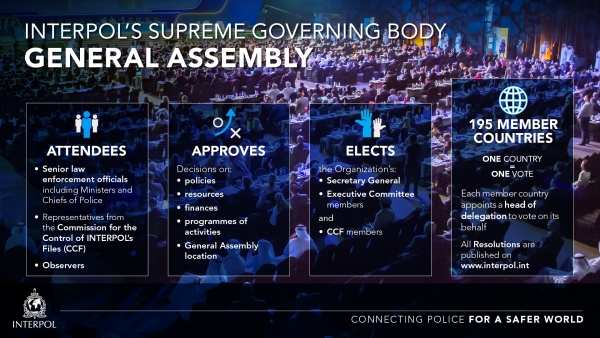 This year, the General Assembly will meet for its 90th session in New Delhi, India. The agenda is expected to include presentations, workshops and discussions on the following subjects:

The future of policing

With our member countries, we are exploring diverse perspectives on the future of policing in an increasingly digitalized world. What are the challenges, how can we respond to threats posed by technology and how should we shape our vision for 2030?

Different panels will look at topical policing initiatives. This will include:

This document provides member countries with an overview of the main crime threats in the world.

The General Assembly elects new members to the Executive Committee as the incumbents end their mandate. This year, two posts are up for election: the vice-president for Europe, and the delegate for Africa. 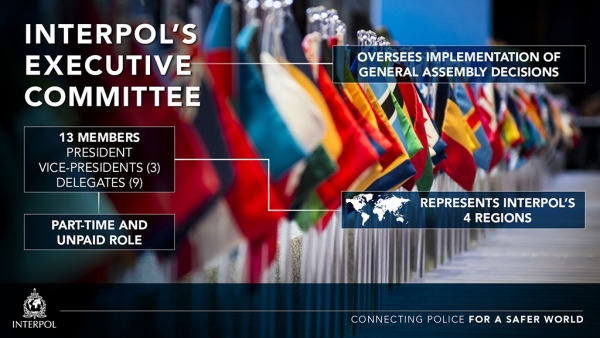 In 2023, INTERPOL will celebrate 100 years since the founding of the International Criminal Police Commission, which then became INTERPOL in 1956. A series of activities are planned to raise awareness of the role of international policing; past, present and future. 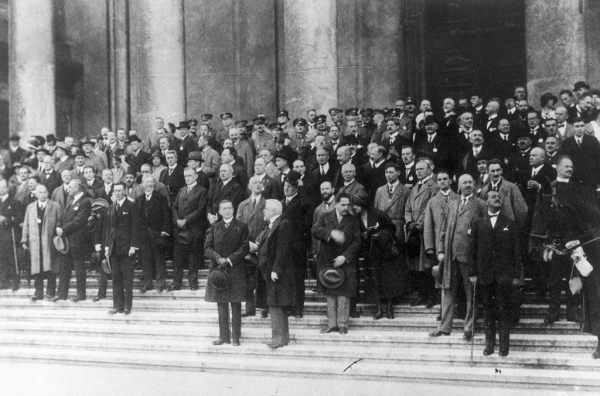 Police have been gathering to discuss international policing for 100 years – pictured here are delegates at the 2nd session of the General Assembly held in Berlin, Germany in 1924.

This panel will discuss how multi-stakeholder strategic partnerships can support law enforcement across the world to face the challenges in global security.

INTERPOL is committed to increasing the geographical and gender diversity of its workforce so it can better reflect and serve its global membership.

We thank India and the officials from New Delhi for hosting this year’s General Assembly and welcoming our delegates from member countries. We recognize the time and effort it takes to put on an event of this scale.

GA-2022-90-RES-07 - Draft agreement between the International Criminal Police Organization – INTERPOL and the Federal Republic of Nigeria on the Pr....pdf412.56KB
ENFRESAR

GA-2022-90-RES-08 - Draft Agreement between the International Criminal Police Organization – INTERPOL and the Government of the United Kingdom of G....pdf412.75KB
ENFRESAR

GA-2022-90-RES-12 - Remuneration of the members of the Commission for the Control of INTERPOL’s Files.pdf419.67KB
ENFRESAR