Criminals can flee to another country to try to evade justice. A Red Notice alerts police worldwide about internationally wanted fugitives.

What is a Red Notice?

A Red Notice is a request to law enforcement worldwide to locate and provisionally arrest a person pending extradition, surrender, or similar legal action. It is based on an arrest warrant or court order issued by the judicial authorities in the requesting country. Member countries apply their own laws in deciding whether to arrest a person.

A Red Notice is an international alert for a wanted person, but it is not an arrest warrant.

Why are Red Notices important?

Red Notices are important because they are used to simultaneously alert police in all our member countries about internationally wanted fugitives.

Red Notices help bring fugitives to justice, sometimes many years after the original crime was committed.

Are the individuals wanted by INTERPOL?

No, they are wanted by a country or an international tribunal.

INTERPOL cannot compel the law enforcement authorities in any country to arrest someone who is the subject of a Red Notice.

Each member country decides what legal value it gives to a Red Notice and the authority of their law enforcement officers to make arrests.

Who are the subjects of Red Notices?

Red Notices are issued for fugitives wanted either for prosecution or to serve a sentence in relation to serious ordinary law crimes such as murder, rape and fraud. This follows criminal proceedings in the country issuing the request. This is not always the home country of the individual.

When a person is sought for prosecution, it means the person has not been convicted and should be considered innocent until proven guilty. A person sought to serve a sentence means that this person has been found guilty by a court in the country that requested the publication of the Red Notice.

Offences for which a Red Notice may not be issued

Article 83 of INTERPOL’s Rules on the Processing of Data sets out the specific conditions for the publication of Red Notices.

Red Notices may be published only if the offence concerned is a serious ordinary-law crime. They may not be published for the following categories:

The General Secretariat maintains a non-exhaustive list of specific offences that fall within the above categories.

The current list of offences that are not compliant with our rules can be downloaded from the Related Documents section below.

What checks are done before a Red Notice is issued?

All Red Notice requests are reviewed for compliance with INTERPOL’s Rules by our Notices and Diffusions Task Force, a specialized multilingual and multidisciplinary task force comprising lawyers, police officers and operational specialists.

When assessing the compliance of a Notice, the task force considers all of the information available to it at the time. For example, information from the National Central Bureau requesting the Notice, other member countries and open sources. 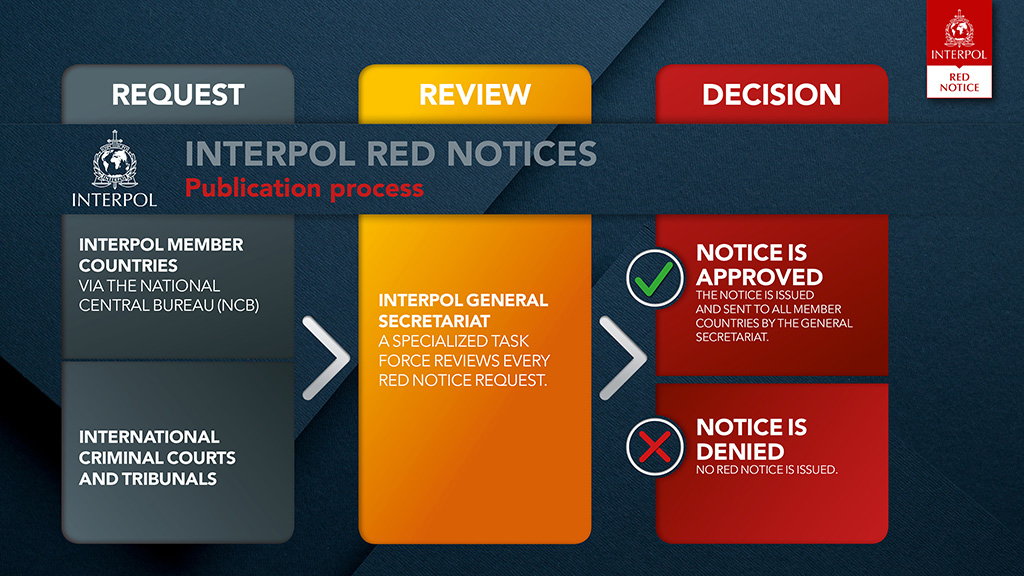 Examples of reasons why a Red Notice may be found to be non-compliant with INTERPOL’s Rules include:

Whenever new and relevant information is brought to the attention of the General Secretariat after a Notice or Wanted Persons Diffusion has been published, the task force re-examines the case.

If a notice or diffusion is assessed as no longer being in compliance with INTERPOL's Constitution and rules, it is cancelled. All member countries are informed of the decision and requested to remove any information from national databases.

What should I do if I have information on an individual?

Can I find out if a Red Notice has been issued for me?

You can contact the Commission for the Control of INTERPOL’s Files (CCF), an independent body. Applications to the CCF are free of charge and treated confidentially.

Specific offences for which Red notices may not be issued.pdf528.15KB
ENFRESAR