Sitting geographically in the heart of Southeast Asia, Brunei’s strong economy and easy accessibility by air, sea, and land transport have the potential to attract crime.

Crime areas most affecting Brunei include property crime such as theft and burglaries, in addition to violent crime and fraud.   As part of the Southeast Asian region, it is also affected by growing cybercrime, and is seeing increased cases of banking scams, online identity theft and social media and phone scams perpetrated from all over the world.

The international characteristics of these crimes and their links with crime networks around the world make the role of the INTERPOL National Central Bureau (NCB) in Brunei fundamental to maintaining national and regional security.

The NCB serves as a liaison platform for Royal Brunei Police Force units and national law enforcement agencies, providing them with a means of working at a global level. It gives them access to INTERPOL policing tools and services to help them tackle their specific crime areas, particularly for fugitive and drug investigations, and environmental crimes.

The Royal Brunei Police Force (RBPF) works with the General Secretariat to continuously boost its capacity to investigate cybercrime and other crime areas with a global link.

The Royal Brunei Police Force is made up of six police departments, four police districts and 13 police stations. It has a strength of more than 4,400 officers, and is responsible for the prevention, detection and investigation of crime at national level, as well as maintaining law and order. 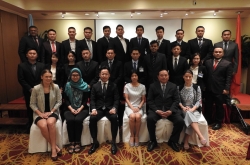 Southeast Asia: Countering terrorist use of the Internet