To anticipate, monitor, prevent and investigate these threats, and because crime networks invariably operate globally, it is essential for Angola’s law enforcement to have at its fingertips a global police cooperation tool enabling it to work with law enforcement in all continents.

The INTERPOL National Central Bureau (NCB) in Luanda is Angola’s lead agency for taking national criminal investigations beyond national borders to work with police forces in other countries and continents.

With a staff of 20 officers, the NCB sits at the heart of Angola’s national police force as part of the Criminal Investigation Department, the national ‘plain clothed’ police unit in charge of investigating serious crime committed both within and beyond Angola’s national borders.

Wildlife and forestry crime, and trafficking in drugs and firearms, are high on the list of NCB Luanda’s daily activities. It works closely with national police and regional NCBs in addressing Angola’s specific crime challenges from a regional and global perspective.

A paramilitary force under the Ministry of the Interior, the Angola National Police is made up of operational, technical, consultative and support bodies, including Border Police, National Criminal Investigations, Traffic Control and SWAT. 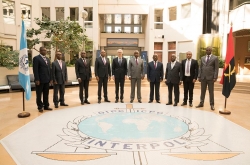