THE HAGUE, The Netherlands – What would you do if you received an email from your company’s CEO asking you to make an urgent payment?

What if a long-time supplier asked you to send all future payments to a new account at a different bank?

Would you immediately make the payment or change the banking details? Or would you first double-check through a different channel that the requests were genuine?

If you would make the payment, you just might become the next victim of a growing type of fraud – business email compromise, or BEC fraud.

Through a new public awareness campaign launched today, INTERPOL is encouraging the public to #BECareful about BEC fraud and know the warning signs to avoid falling into the criminals’ trap. 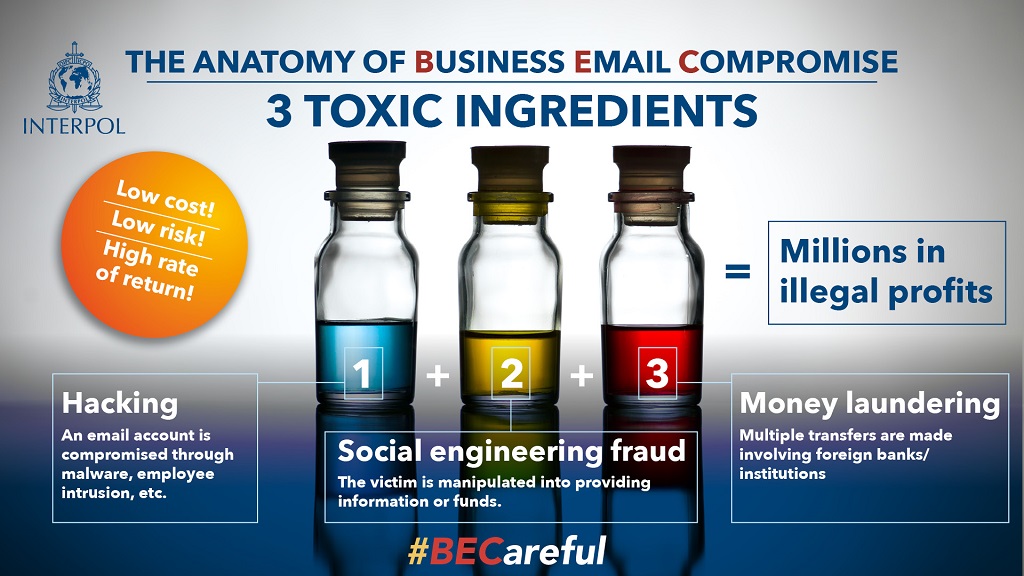 BEC fraud – also sometimes called CEO fraud – is a type of social engineering scam where criminals deceive company employees into transferring money to them. They might gain access to the victim’s devices or systems through malware or other security vulnerabilities, and learn enough about the company’s inner working to convincingly impersonate either a high-ranking employee like the CEO or a supplier.

INTERPOL’s month-long #BECareful campaign will inform the public about this growing type of fraud and provide information security and prevention tips for how to stay safe.

“We hope the #BECareful campaign will bring this issue to the forefront by raising public awareness and offering concrete advice to reduce the number of potential victims, with the ultimate goal of keeping money out of the hands of criminals,” he concluded.

The awareness campaign will be conducted primarily via social media, and will focus on three key areas:

Don’t let scammers trick you into making payments to their accounts!

To gain the widest global reach, INTERPOL has signed on police and financial authorities in around 60 member countries to support the campaign by sharing information on BEC fraud and using the #BECareful hashtag to start a global conversation.

A number of private sector companies in the cybersecurity field, international organizations and non-profits are also supporting the campaign by sharing information on BEC cases, as well as on tools available to help members of public protect their systems from this threat.

The campaign was launched during the 7th Europol-INTERPOL Cybercrime Conference taking place this week in The Hague.