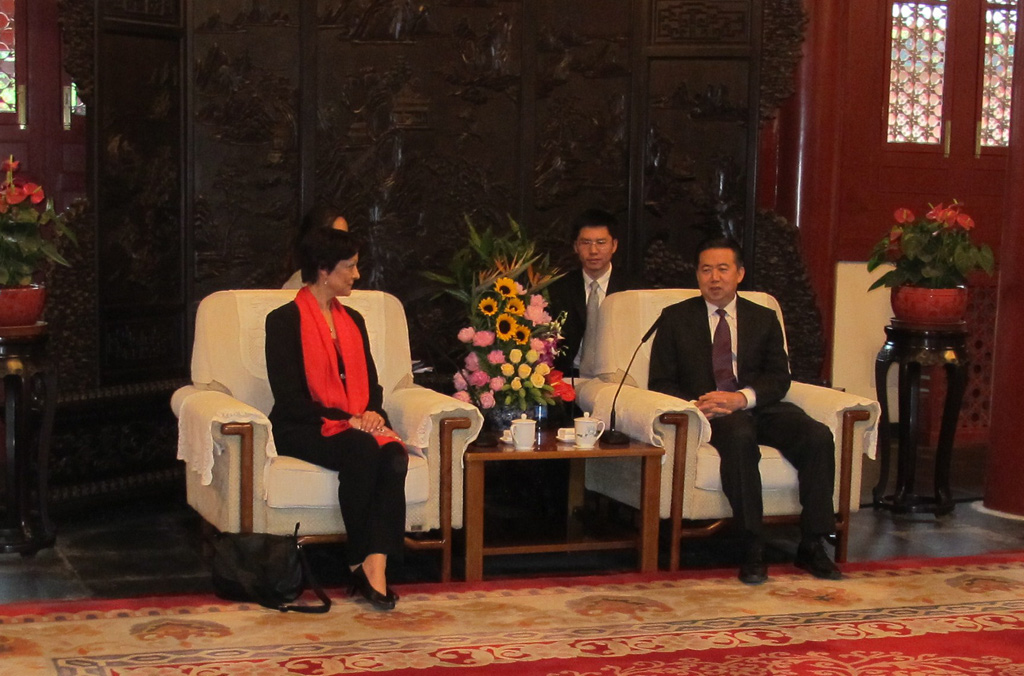 INTERPOL President Mireille Ballestrazzi meets with Mr Hongwei Meng, Vice Minister of Public Security and Head of the INTERPOL National Central Bureau in China, during her first official visit to the country.
/

During her two-day (28 and 29 April) mission, President Ballestrazzi met with Mr Hongwei Meng, Vice Minister of Public Security and Jinrong Liao, Director General of the International Cooperation department in the Ministry of Public Security.

Speaking at the People’s Public Security University of China (PPSUC), President Ballestrazzi said police needed to cooperate globally to better address all types of crime which are becoming increasingly organized and innovative.

“National and regional boundaries should not restrict police activity. An international response is required and this is where INTERPOL plays an essential role,” added President Ballestrazzi, pointing to China’s cooperation in a number of INTERPOL-coordinated initiatives.

In September 2013 China hosted its first INTERPOL training session to combat trafficking in illicit goods. The seminar which brought together some 120 police investigators from across the country built on the success of Operation Hurricane, the first ever INTERPOL-led operation targeting illicit trade in Asia.

Interventions across China in May and June 2013 resulted in several organized crime networks being broken up, the closure of nearly 80 sites producing fake goods and the seizure of counterfeits worth millions of dollars.

President Ballestrazzi also highlighted China’s previous involvement in targeting Asian organized crime networks through its participation in the INTERPOL-coordinated SOGA operations combating illegal football gambling. Between 2007 and 2012 the four operations led to nearly 7,000 arrests, the seizure of more than USD 26 million in cash and the closure of illegal gambling dens handling bets worth more than USD 2 billion.