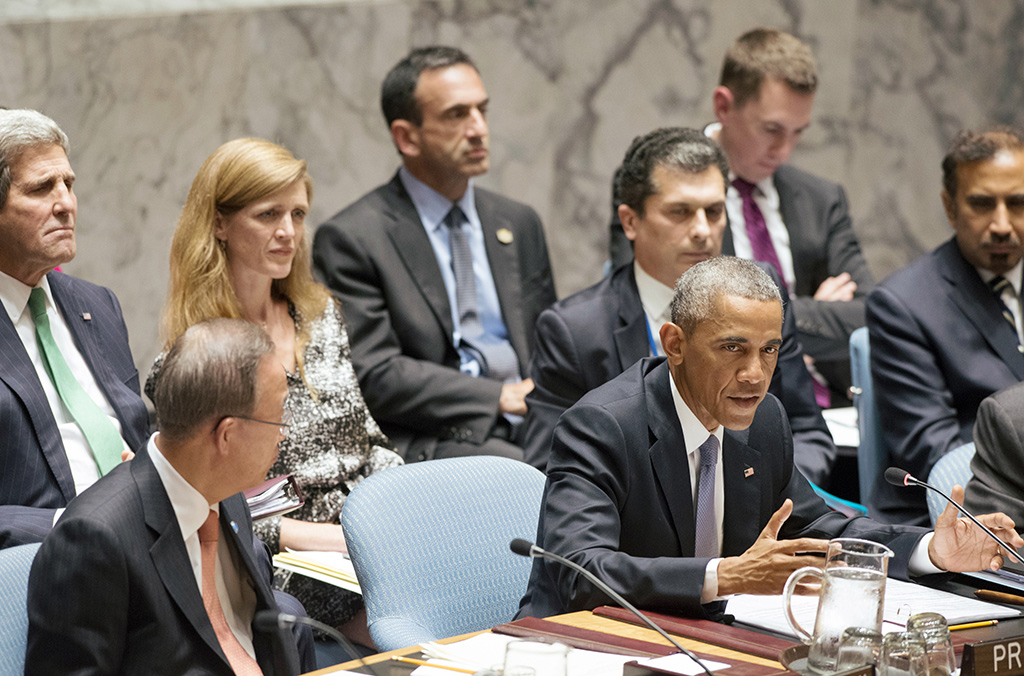 Resolution 2178 (2014) was submitted during a special session of the UNSC chaired by US President Barack Obama, pictured alongside UN Secretary-General Ban Ki-moon. © UN/Kim Haughton

The global role of INTERPOL against the threat posed by foreign terrorist fighters has been recognized in UN Resolution 2178 (2014). © UN/Mark Garten
/

Resolution 2178 (2014), which was submitted during a special session of the UNSC chaired by US President Barack Obama, also highlights the use of INTERPOL’s I-24/7 secure police communications network, global databases and system of advisory notices, in addition to its counter-terrorism efforts and procedures to track stolen, forged identity papers and travel documents.

To this end, global complementary tools provided by INTERPOL to prevent the international travel of foreign fighters include its Stolen and Lost Travel Documents (SLTD) database, as well as I-Checkit, a screening measure enabling companies in the transport, banking and tourism industries to submit passport information for screening against the SLTD database. It currently contains more than 43 million records from 167 countries.

“The UN Resolution recognizes that the transnational threat of foreign fighters is a global collective responsibility, and that sharing information through INTERPOL’s global network is vital to more effectively identify suspected foreign fighters and prevent them from travelling,” said Secretary General Noble.

“INTERPOL is working to facilitate exchanges between our 190 member countries to compile and compare information and identifiers of suspected foreign fighters, but this must be complemented by efforts on the ground. The time to act is now, and UN Resolution 2178 will be crucial to that effort,” added the Head of INTERPOL.

INTERPOL’s National Central Bureau in Washington on Wednesday announced the formation of a dedicated INTERPOL Foreign Terrorist Fighter programme in partnership with the US National Security Council, Department of Justice, and Department of Homeland Security.

In this respect, US Attorney General Eric Holder said: “In a world that is increasingly interdependent and interconnected, INTERPOL helps to defend against a range of evolving challenges by disseminating information, combating crime, and identifying potential threats.”

The issue of foreign terrorist fighters will be high on the agenda of the 83rd INTERPOL General Assembly in Monaco (3-7 November), which will include a ministerial meeting including Home Affairs, Justice and Security Ministers from more than 100 countries.