Russia is the world’s largest country by area, and shares borders with countries in northern Asia and Europe. Identifying, investigating and preventing serious crime across Europe and Asia is a large part of the daily work carried out by INTERPOL’s National Central Bureau (NCB) in Moscow.

The NCB’s global police cooperation activities are centered on Russia’s crime areas of priority concern; these include terrorism, organized crime – particularly drug and financial crime - and the international fugitive investigations these generate. Cybercrime is also an emerging crime area of concern.

To ensure the NCB can best support national efforts to tackle Russia’s main crime concerns, it comprises the following units:

The NCB shares this national police intelligence with other NCBs across the globe so that together they can monitor the transnational crime situation and take preventive action when required.

Law enforcement services in Russia are provided by several different departments of the Ministry of the Interior: 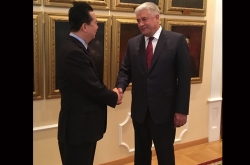