A decade of pushing investigations beyond invisible borders to disrupt the criminal networks behind fisheries crime.

Unlike a decade ago, it is not just fishing vessel captains and owners who are responsible for present-day fisheries crime. It is largely down to business executives, public officials, lawyers, accountants and other white-collar professionals.

One kilo of Totoaba fish bladder is worth more than 1kg of cocaine on illegal Asian markets - a low risk high rewards alternative fetching up to USD 50,000 per bladder

INTERPOL established a dedicated Environmental Security Programme (ENS) in 2010.  This week, to celebrate the programme’s first decade of action, we focus on how INTERPOL has enabled countries in all parts of the world to tackle the wide range of serious crimes associated with the fisheries sector.

Fishing vessels are often also used to smuggle people, drugs and firearms, as well as to carry out piracy or terrorist attacks.

Did you know a 6-week illegal fishing trip to Antarctica can make up to six million euros in profit?

4. INTERPOL Notices: publication of a wide range of colour-coded INTERPOL Notices on fishing vessels and associated suspects, alerting countries to poaching, smuggling, illegal trade, food fraud, customs fraud, and public health issues as well as human trafficking in the fisheries sector and abuse of flag state registries;
5. Global police cooperation: Using INTERPOL’s secure global police communications network called I-24/7, police forces today fight fisheries crime together, beyond maritime borders, monitoring the global crime landscape for early threat detection, and conducting financial investigations to follow the money which drives organized crime in the fisheries sector;
6. Crime convergence: a decade of detecting links between fisheries crime and other serious organized crime, particularly fraud, corruption, tax evasion, forged documents and money laundering.  Although not so common a decade ago, human trafficking and labour exploitation are key pillars sustaining contemporary fisheries crime. With the victims, perpetrators and vessels originating from a wide range of different countries, only a global police organization can provide the kind of support needed to coordinate action at international level.
7. Addressing emerging trends: INTERPOL has spent the past decade working closely with fisheries investigators across the globe, sharing ideas, techniques and information on identifying and verifying patterns in fishing industry and associated crimes, particularly as it relates to the detection of and action against forced labour.  Crew members are often kidnapped, sold or coerced to leave their home countries to work as cheap manpower for the industry, suffering  food and water deprivation, torture, beatings and 20-22-hour days in brutal working conditions.  Some victims are trapped on ships for years on end with no means of escape. INTERPOL has created operational groups and information sharing mechanisms over the past ten years to boost cross border and multi-agency cooperation in addressing this. 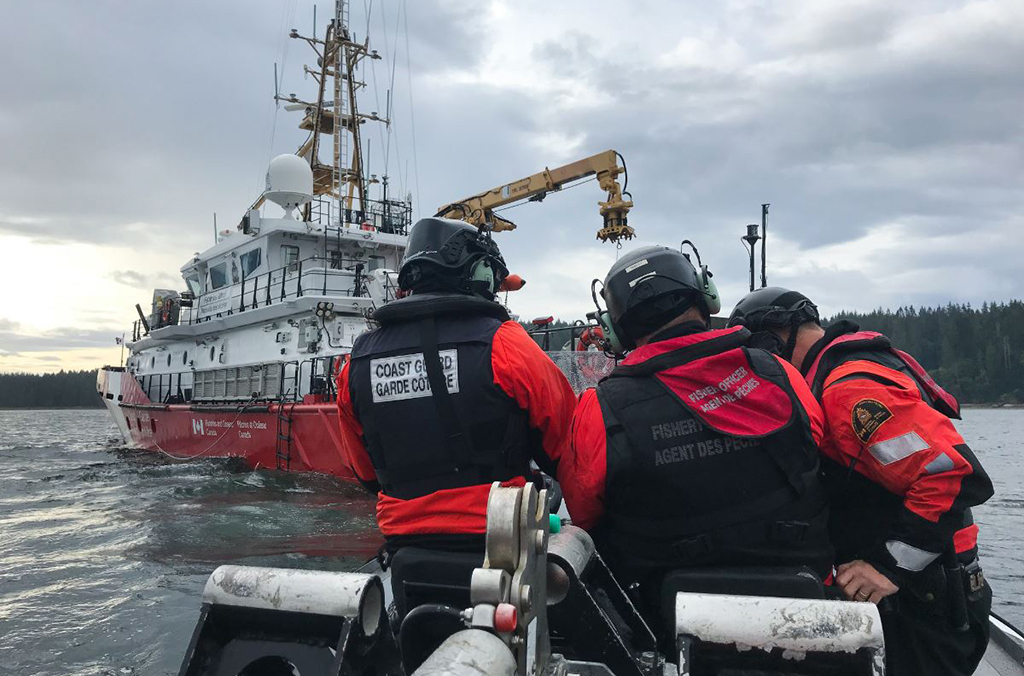 A decade of INTERPOL action has enabled the world’s police community to better recognize the threat of fisheries crime to national security and public health.
INTERPOL member countries have been working together for a decade to dismantle criminal networks behind fisheries crime, tackling entire networks, not just individual poachers.
Sharing intelligence to identify and investigate serious organized crime networks has been the main focus of INTERPOL’s fisheries training courses over the past ten years.
Regional and national training events across the globe have led to increased fisheries crime investigations and prosecutions.
Ten years of global fisheries operations have helped countries to collect intelligence and identify trends and risk indicators, triggering intelligence-led investigations worldwide.
INTERPOL has coordinated complex fisheries crime investigations across multiple maritime jurisdictions over the years resulting in the detection of hundreds of cases of illegal harvest, processing and transportation of fish.
Investigative Support Teams (ISTs) are sent in to the field regularly to assist countries with INTERPOL expertise and police capabilities, resulting in a decade of detentions, convictions and penalties worldwide.
INTERPOL has worked closely with fisheries investigators over the past decade, sharing ideas, techniques and information on identifying illegal, unreported and unregulated (IUU) fishing patterns.
Although not so common a decade ago, human trafficking and labour exploitation are key pillars sustaining contemporary fisheries crime.
IUU vessel crew members are often kidnapped, sold or coerced to work as cheap labour, often suffering food and water deprivation, torture and beating.
/

10 years of impact illustrated in one landmark case: FV STS-50

This case – one of many similar cases carried out by ENS over the past decade - highlights the challenges of tackling fisheries crime and the unique role of INTERPOL in providing a coordinated international response.

Acting on a request from INTERPOL, Indonesia seized one of the world’s most wanted pirate fishing vessel in 2018 after it evaded capture in many countries.  Called “ANDREY DOLGOV”, “STS-50”, “SEA BREEZ 1” and many other names over the preceding decade, the ship was suspected of transnational fisheries-related crime including illegal fishing, document fraud, manipulation of shipborne equipment, illegal open-sea transshipments and serious identity fraud.

The vessel was a master of disguise. It changed its name six times, flew the flag of as many nations and disguised its electronic identification systems to confuse pursuers. For years it illegally fished across three oceans, misreporting the type of fish being offloaded to avoid sanctions, using forged documents to deceive authorities, retreating to the relative safety of international waters whenever the risk of capture was high. It is believed to have pilfered a total USD 50 million worth of fish from the ocean in a decade.

Acting on a request from INTERPOL, in 2018 Indonesia seized one of the world’s most wanted pirate fishing vessels - known as “ANDREY DOLGOV”, “STS-50” and “SEA BREEZ 1” over the preceding decade – after it evaded capture in many countries for serious fisheries crime.
The vessel was a master of disguise, changing its name six times and flying the flag of many nations, disguising its electronic identification systems to confuse pursuers.
This case – one of many similar cases carried out over the past decade - highlights the challenges of tackling fisheries crime and the unique role of INTERPOL in providing a coordinated international response.
As part of the maritime interception strategy, an Indonesian officer receives hourly geographical coordinate updates from INTERPOL via satellite telephone on the exact location and course of the targeted vessel.
INTERPOL used high tech maritime monitoring technology to follow the Indonesian patrol boat (seen here on an INTERPOL monitor at the time) as it made its way to meet the rogue vessel at the exact point it was expected to enter Indonesian waters.
The vessel was immediately captured by the Indonesian Navy and forced to dock.
At the request of Indonesia, INTERPOL deployed an Investigative Support Team to help national authorities on evidence collection and develop their investigation.
INTERPOL experts gave technical guidance on the vessel’s shipborne communication and navigation equipment to ensure thorough collection of investigative data.
INTERPOL helped law enforcement agencies in a number of countries to track down the criminals who operated the FV ”STS-50”, counterfeited its documents and had helped to launder its catches and the money it made.
INTERPOL examined the evidence and intelligence collected on board - computer systems, navigational instruments, and the captain’s mobile phone – which would later enable the global law enforcement community to piece together the wider criminal web that the vessel operated in.
Earlier on in the investigation, INTERPOL had issued a Purple Notice (PN) against the vessel. PN’s are an important tool for fisheries enforcement as they allow police worldwide to share information about the vessel modus operandi and collect more information on its suspected illegal fishing activities.
In a similar more recent case, Thai authorities captured another of the world’s ‘most wanted’ rogue vessels in collaboration with INTERPOL - the “UTHAIWAN”, believed to be part of a fleet of IUU vessels loosely called the “Al Wesam” fleet known to operate in Southeast Asia and the Horn of Africa.
/

After a tip-off was received from New Zealand, INTERPOL issued a Purple Notice against the vessel for IUU fishing. Purple Notices are an important tool for fisheries enforcement as they allow police worldwide to share information about vessels known or suspected of engaging in illegal fishing activities.

ENS coordinated the exchange of intelligence between countries along the vessels’ travel route as it attempted to evade detention traveling from East Asia to Africa and back to Southeast Asia.  After countless hours coordinating cooperation between dozens of collaborators across several nations (fishers, port authorities, government officials, and marine crime agencies),  ENS was eventually able to alert Indonesian authorities on the exact moment the vessel entered its waters, leading to its immediate capture by the Indonesian Navy.

ENS coordinated global investigations, enabling countries from across the world to meet and discuss the evidence, prosecution and associated investigations.  Findings triggered financial investigations which ultimately connected the ship to organized crime in Europe.  It was clear that the majority of crew members were victims of labour exploitation.
ENS examined the evidence and intelligence collected on the fishing vessel—on-board computer systems, navigational instruments, and the captain’s mobile phone—enabling the global law enforcement community to piece together the wider criminal web that the vessel operated in.

ENS also helped law enforcement agencies in a number of countries to track down the criminals who operated the FV ”STS-50”, counterfeited its documents and had helped to launder its catches and the money it made.

Read : The hunt for the fish pirates who exploit the sea (BBC)

INTERPOL works in close collaboration with governmental, non-governmental and international organizations to disrupt transnational organized criminal groups involved in environmental crime. These partners also help us to provide our member countries with technical and logistical support.

We would particularly like to acknowledge the valuable support from our Fisheries Crime Working Group (FCWG)  and our partners and encourage other national, regional and international stakeholders and the wider international donor community to support our vital work to stop organized crime affecting our environment.

Follow us for more about a decade of tackling fisheries crime:

Join us next week to find out more about how INTERPOL has spent the last decade tackling environmental crime in the forestry sector.