ROME, Italy – The potential role of the Speaker Identification Integrated Project (SIIP) within police investigations was demonstrated at a recent ‘proof of concept’ event for law enforcement.

Attended by police officers from more than 20 law enforcement agencies, forensic experts and representatives from academia and the private sector, the systems capabilities were shown in a variety of scenarios.

During the demonstration on 1 June, the system successfully isolated and matched individual voice recordings extracted from social media using key identifiers such as gender, age, language and accent.

SIIP is aimed at assisting the identification of criminals and terrorists through the development of a speaker identification engine able to run on different sources including the Internet, via social media or fixed and mobile telephones in lawful interceptions.

Launched in 2014 and funded by the European Union, SIIP is a large-scale multi-disciplinary research project coordinated by Verint Systems Ltd. In total, 19 partners from law enforcement, academia and industry are collaborating on the project which is now at the half-way stage. 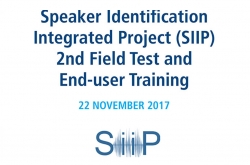 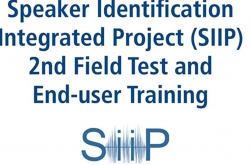