Lyon, France – A new INTERPOL report has underlined the need for greater operational and investigative responses to the highly lucrative illicit tiger trade if the species is to avoid extinction. 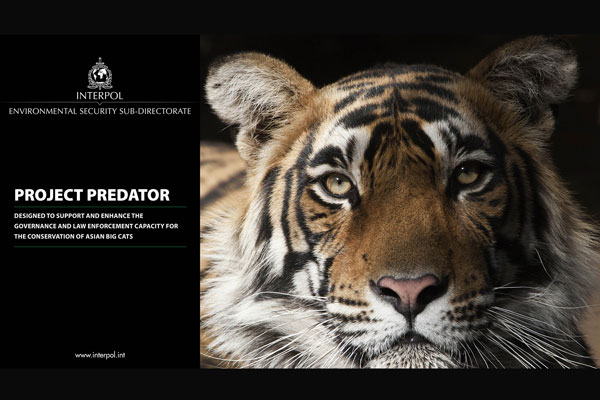 The ‘Assessment of Enforcement Responses to Tiger Crime’ report also highlights the need for a network of intelligence analysts from tiger range countries to develop a plan for consistent, transparent and effective information management in relation to international wildlife trafficking.

To this end, a four-day meeting with analysts from tiger range countries and other international specialists will be held at the General Secretariat headquarters in Lyon in May. In addition to sharing information on Asian big cat crime, the meeting is also aimed at identifying areas where INTERPOL can support countries in strengthening intelligence management to develop a cohesive global strategy to more effectively tackle the criminal networks behind tiger crimes.

“Intelligence gathering and information sharing as part of a multi-agency approach are essential if law enforcement is to fully play its role in preventing criminals from driving this iconic species to extinction,” said David Higgins, head of INTERPOL’s Environmental Security unit.

“Tools and services, such as INTERPOL’s databases and notices, are in place to help identify and arrest criminals, but they need to be used to their full extent if they are to be effective in combating this and all types of wildlife crime,” added Mr Higgins.

The report was drafted as part of INTERPOL’s Project Predator. Funded primarily by the US Agency for International Development (USAID), the project was created in 2011 to develop a global picture of the criminal activity undermining ongoing conservation efforts in relation to tigers and other big cats.

“We are united in our efforts to stop the killing and illegal trade of wild tigers. This report works to this end and informs the United States’ efforts in implementing our new National Strategy to combat wildlife trafficking,” said Mary Melnyk, USAID’s Senior Advisor, Natural Resources Management for Asia and the Middle East.

The report highlighted the important role of global and regional organizations in encouraging cooperation and communication between tiger range countries, as well as the need to raise public awareness to reduce consumer demand and support tiger conservation.

The report’s findings were previously shared with other key partners at a meeting in Washington DC, which brought together agencies and organizations including USAID, the US Fish and Wildlife Service, US Department of State’s Bureau of International Narcotics and Law Enforcement Affairs (INL), the World Bank Global Tiger Initiative, Smithsonian Institution, IFAW and WWF.