LYON, France – The US Department of Homeland Security (DHS) Secretary Janet Napolitano made an historic visit to the INTERPOL General Secretariat headquarters in order to enter into a series of agreements to enhance the global fight against human trafficking and other serious crime. 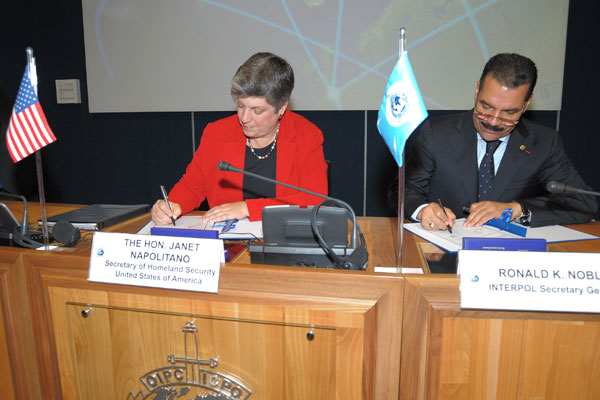 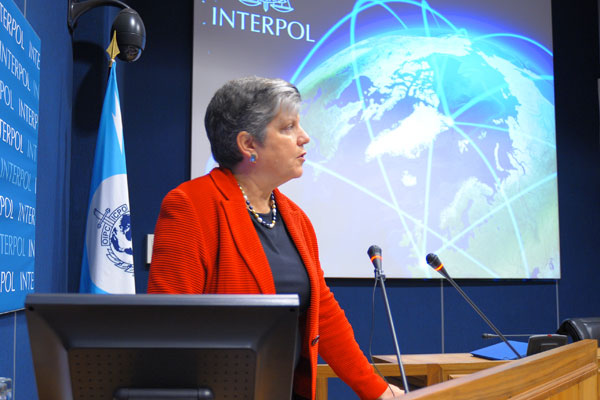 Secretary Napolitano said INTERPOL was a vital partner in bringing many parts of the global law enforcement community together. 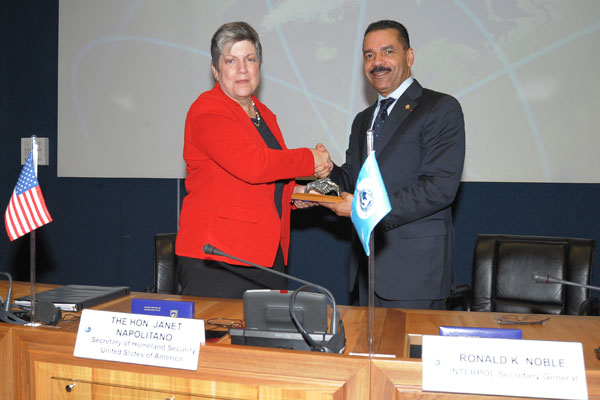 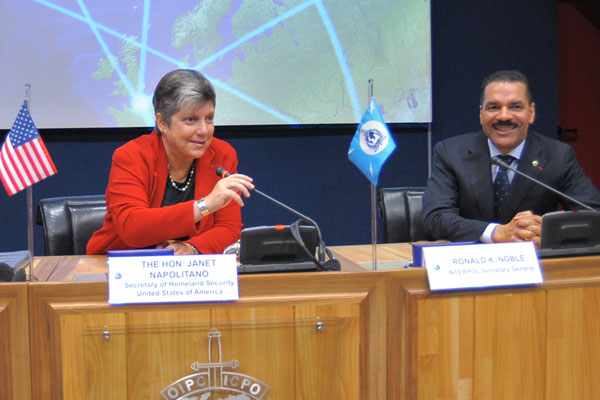 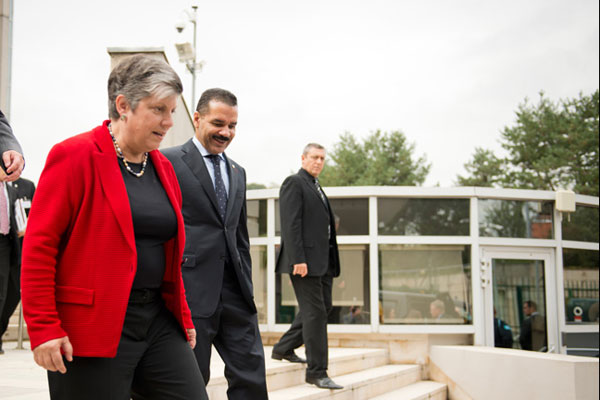 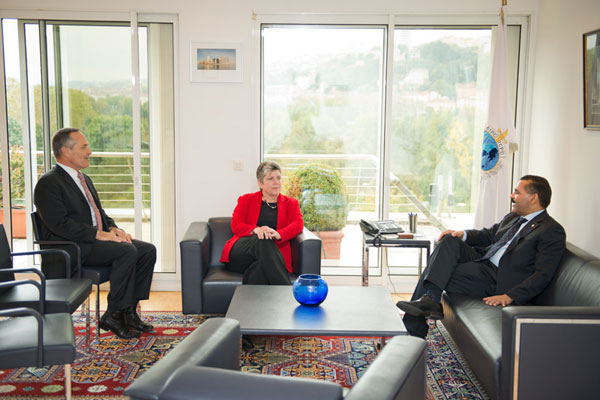 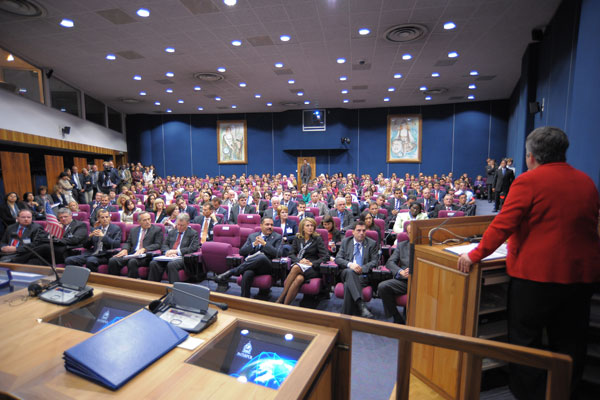 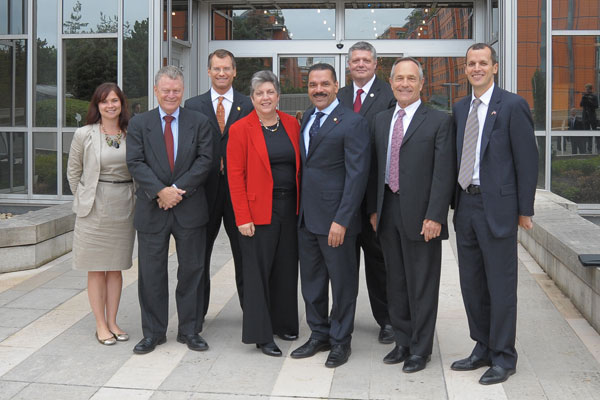 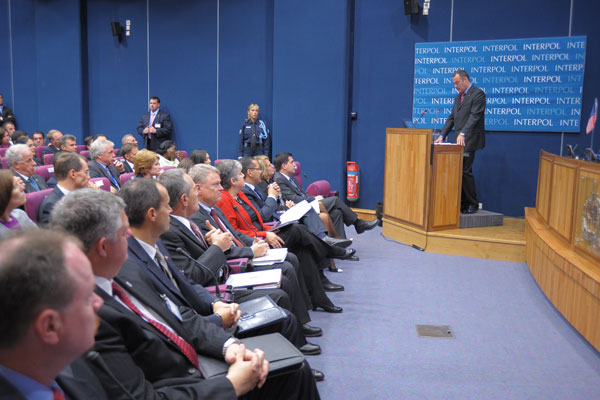 The Department of Homeland Security launched its Blue Campaign as a first-of-its-kind initiative, unifying the DHS components and expanding collaboration with external partners, to more effectively combat human trafficking through enhanced public awareness, training, victim assistance, and law enforcement investigations to protect victims from being trafficked both within the United States and around the world.

In addition, with the US as the top user of INTERPOL’s Stolen and Lost Travel Documents (SLTD) database, conducting more than 171 million searches so far in 2012 – the equivalent of 400 checks per minute – Secretary Napolitano supported the creation of a Border Management Working Group to encourage a more focused effort to strengthen border management capacity, and greater worldwide use of this vital border protection tool which currently contains more than 34 million records from 166 countries.

“As a border, customs and immigration agency, and one of the largest international investigative agencies in the US, DHS is, in many respects, the face of American law enforcement to the world. And INTERPOL is the face of law enforcement across the globe,” said US Homeland Security Secretary Janet Napolitano.

“INTERPOL is a vital partner in bringing many parts of the global law enforcement community together, including their Stolen and Lost Travel Documents database that is critical to our border and homeland security efforts.

“The agreements we are signing today are important in expanding our partnership to support our mission to prevent and combat crime internationally,” concluded Secretary Napolitano.

INTERPOL Secretary General Noble said: “The US Department of Homeland Security has made not only the US but the entire world safer by conducting hundreds of millions of consultations of INTERPOL's databases to identify terrorists, human traffickers, murderers, rapists, child sex offenders and other dangerous criminals.

Close cooperation between the DHS and INTERPOL has already seen significant results, including the break-up of an international abuse network after officers from the US Immigration and Custom Enforcement Homeland Security Investigations shared seized child sexual abuse images with specialist investigators worldwide via INTERPOL.

Subsequent investigations have so far led to the arrest of nearly 40 sex offenders from every region of the world, including in The Netherlands, where a man was sentenced to 18 years in May 2012 for abusing more than 60 children, some just a few months old, in two Amsterdam nurseries and homes where he babysat.

The DHS also pledged their support for the INTERPOL Global Complex for Innovation (IGCI), to assist in the development of curricula and training officials at the complex which will provide a global focal point for law enforcement efforts around the world for investigative support, research and innovation on digital crime, forensics and cybersecurity.

With training a key area in INTERPOL’s overall mission to promote international police cooperation, support by the US Federal Law Enforcement Training Center, whose Director Connie Patrick is also Chair of INTERPOL’s international training group, has been key in maximizing resource sharing and capacity building throughout the world police body’s 190 member countries.