KORIYAMA CITY, Japan – INTERPOL Secretary General Ronald K. Noble has underlined the essential role of law enforcement in supporting those responsible for nuclear safety and security, in the wake of the Fukushima nuclear accident triggered by an earthquake and tsunami in March 2011. 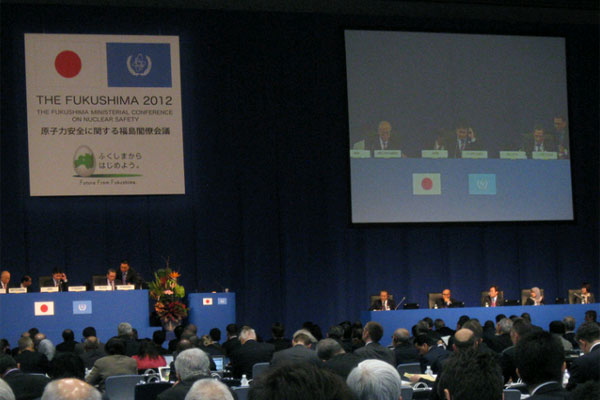 The Fukushima ministerial conference heard that law enforcement has a crucial support role to play in nuclear safety.
/

Speaking at the Fukushima Ministerial Conference on Nuclear safety (15-17 December), Mr Noble said that a lesson from severe nuclear incidents such as Fukushima or Chernobyl (1986) is that law enforcement must play a crucial role in supporting emergency preparedness and response, capacity building and information sharing.

Secretary General Noble said that over the past year alone, thanks to key partners like the IAEA, INTERPOL’s radiological and nuclear terrorism prevention programme had trained close to 170 officers from more than 40 countries on how to handle radiological crime scenes and disaster management.

In this respect, rapid and secure police communication is one of INTERPOL’s strategic priorities, with its global state-of-the art I-24/7 communication network allowing almost 17 million messages to be exchanged within seconds by police around the world in 2011 alone.

Mr Noble said that INTERPOL therefore fully supported the IAEA Action Plan on Nuclear Safety and its reliance on emergency preparedness, capacity building and communication and information dissemination, key components within a programme of work to strengthen the global nuclear safety framework.

Recalling how within 48 hours from the moment the Tohoku earthquake had struck Fukushima an INTERPOL Incident Response Team was ready to be deployed to support disaster victim identification efforts, Mr Noble said: “INTERPOL renews its pledge to assist all countries and their police, to be ready for any future incident that may arise, including the one we hope we’ll never face: the day a single individual crosses borders to detonate a nuclear or radiological device and take as many innocent lives as possible.

“That’s the day we will know for sure whether we have learned the lessons of history,” warned the Head of INTERPOL.

Mr Noble earlier paid tribute to officers from Japan’s National Police Agency and Fukushima Prefecture who joined efforts to cool the spent fuel pools at the Fukushima Daiichi Plant, helped identify bodies in the areas most hit by the disaster and supported evacuation efforts.